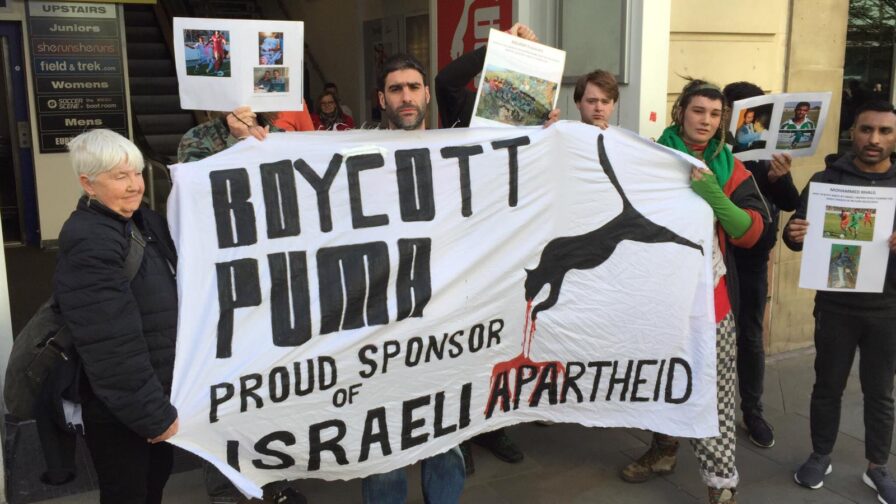 Global sportswear manufacturer Puma is involved in violations of international law and human rights, due to its sponsorship of the Israeli Football Association (IFA). Puma is the main sponsor of the IFA, which includes teams in Israel’s illegal settlements on occupied Palestinian land.

Manchester Palestine Action demonstrated last Saturday at the Puma department of Sports Direct on Market St in Manchester, to call for a global boycott of Puma for sponsoring the Israeli Football Association (IFA). Video of the action can be viewed on Facebook and Twitter.

Israel’s military occupation expels Palestinian families, including children, from their homes to give way for these settlements, in the occupied West Bank. Israeli settlements in occupied territory are considered war crimes under international law. During our action in Manchester we held up photos of Palestinian footballers whose careers have been destroyed by Israeli oppression, such as Mahmoud Sarsak. Other footballers have been deliberately shot in the legs at Israeli checkpoints, ending their careers.

Our action today supporting the
200 Palestinian sports clubs who’ve called for a boycott of Puma until it ends its sponsorship of the Israeli Football Association #Boycottpuma pic.twitter.com/SACWtqSUzF

More than 200 Palestinian sports clubs have called on Puma to end the sponsorship deal. The IAF has 6 teams playing in illegal Israeli settlements built on stolen Palestinian land. Israeli bombing in Gaza makes sport a dangerous pastime for Palestinians. This bombing has killed Palestinian national footballers and destroyed Palestinian football stadiums in Gaza.

Palestinians have as much right as the Israeli’s to play sport without fear of serious injury and death. We ask you to sign the pledge to boycott Puma, as long as they continue to sponsor the Israeli Football Association.

The action against Puma has been called by the Palestinian BDS National Committee (BNC). In the UK the Palestine Solidarity Campaign has also called on the Premier League team Newcastle United not to renew their sponsorship with Puma, join the call here. On the 15 June a global day of action is planned against Puma, find out more about that here.

Today, Puma shareholders will gather for the company’s Annual General Meeting (AGM). Let’s make sure Puma’s sponsorship of Israeli war crimes is on the agenda! Tweet the pledge to #GivePumaTheBoot.