Endemic avoidance of payments to councils by property developers revealed, while affordable housing is sacrificed for profit 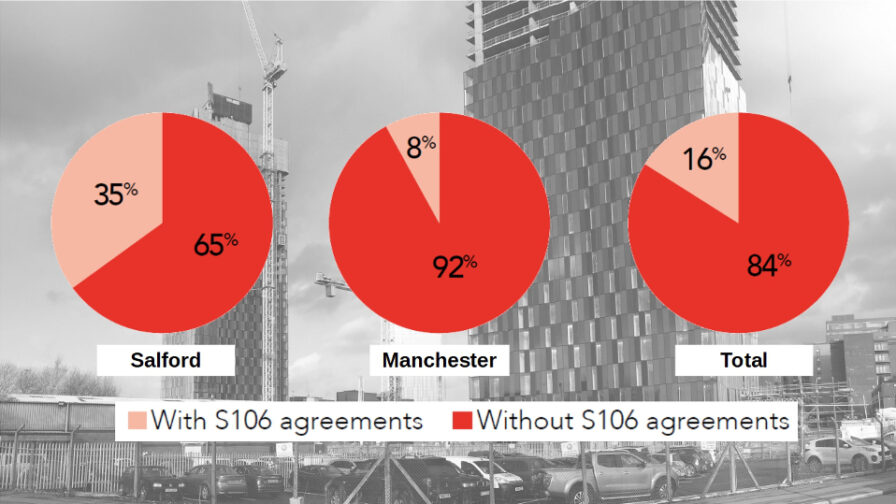 A comprehensive report on the huge sums of money fuelling the housing development boom in the city centre has revealed the scale of non-payment of development funding to the council: only 8% of housing development in Manchester City Centre included in the study had any Section 106 agreement at all. The lack of money collected is mirrored by the lack of provision of affordable housing: out of a possible 2,956 units which could have been built in Manchester City Centre under affordable housing requirements, no affordable units at all were built.

Section 106 agreements are part of the Town and Country Planning Act 1990. They allow councils to mitigate the impact of development by getting the builder to pay for extra local services, facilities, infrastructure or environmental improvements that are needed due to the influx of new people. During Section 106 negotiations the amount of affordable housing in the development will often be decided. National guidance says local authorities and developers should aim for around 20% of the total number of units to be affordable, where affordable is defined as 80% of the market rate.

Dr Jonathan Silver from the University of Sheffield’s Urban Institute is the author of the report From Homes to Assets: Housing Financialisation in Greater Manchester. Silver previously presented his preliminary work in Manchester, which was covered by The Meteor. A key driver for Silver was the striking contrast between a housing development boom across the city centre co-existing with increasing homelessness and a growing housing crisis for many, who Silver says are “struggling to access the basic human right of housing”. He believes that the shift towards treatment of housing as an asset to be managed (financialisation) is a key driver to the housing crisis in Greater Manchester, and says his report:

“…outlines the ways in which housing in the central neighbourhoods of Manchester and Salford have become financialised, transformed from homes into assets by developers and financial actors, whose concern for maximising profit shapes the housing futures of a city-region.”

Housing financialisation is being deliberately enabled by the strategic planning of local authorities, national government and business, says Silver. He describes the lack of Section 106 agreements and affordable housing provision as “enabling conditions” which encourage investment to come pouring in to Greater Manchester’s housing market from a wide range of national and international financial investors (some with dubious reputations or incognito via tax havens). These conditions further increase the already considerable returns available to investors in Private Rented Sector (PRS) developments, which made up 44% of the total housing units included in this study.

The report concerns data collected for 25,753 new housing units in the ‘development pipeline’, spanning 79 sites across central Manchester and Salford.

The affordable housing model, which limits rent and sale prices to 80% of market rate, was the coalition government’s answer to dwindling council/social housing. It was meant to compel private developers to build lower cost housing through legislation included in Section 106 agreements between the local authority and the developer. But perversely, for those requiring lower cost housing, the coalition also introduced viability assessments which allowed developers to legally avoid the obligations to pay Section 106 funding and provide affordable housing by claiming (often with overestimated costs) that they would make less than 20% profit if they had to build affordable housing.

“The Council does enforce and secure Section 106 contributions from city centre developers in accordance with council policy. We currently have more than £1.6m secured, over the last two years along with further significant contributions close to being secured through agreements awaiting signing.

A particular bone of contention for Silver and many others concerned about affordable housing provision is that viability assessments are not published, denying public scrutiny of deals that sometimes involve public assets, such as public land being transferred to private developers. An increasing number of councils such as Croydon, Greenwich, Southwark, Bristol and Brighton & Hove, are now publishing these assessments openly after sustained public pressure. There is a petition online asking Manchester City Council to do the same.

“Viability assessments are submitted as part of the planning application process and are scrutinised to establish whether a development is deliverable on a site by site basis having regard to all costs. Manchester’s Planning Authority receive information as commercially sensitive, so they are not made public. We are aware that when other local authorities have released viability assessments, they have done so only with heavy redactions – not the full assessment.”

The amount of money pouring into the property market in Greater Manchester is staggering. Collecting figures for 29 of the development sites gave a sum of £2.13 billion, which averages out at £74 million per site. Extrapolating that figure across all 79 sites gives a total of £5.85 billion. The money increasingly comes from a range of sources that are replacing the traditional loans from national UK banks that used to fund housing development. These include institutional investors such as Legal and General in partnership with a Dutch Pension fund, who are investing in 315 PRS housing units. Another “investment vehicle” company is Grainger which is financing 600 PRS units at Salford Quays and Clipper Quay. Even local wealthy individuals such as Fred Done and his company Salboy Ltd are getting in on the act by investing in property development and also being one of the big 13 developers (responsible for 1087 units) operating in the city region. Other big developer players in the region are Allied London (2534 units), Renaker (2347 units) and Manchester Life (1436 units).

Finance from international sources is also an increasing factor, mainly for private rental development, with 55% of all PRS housing developments in Manchester having international finance. Even if you live in Manchester and are lucky enough to afford one of these luxury apartments, you may not be able to actually buy one. Evidence shows that 78% of Build for Sale units are being marketed internationally, with some being sold ‘off-plan’ internationally before they become available for local residents.

Central Manchester is currently a very attractive place for investors, where someone buying a housing unit to let can expect an 8.3% rate of return on their investment; this compares very favourably with a Buy to Let gross yield return of 1.8% in London’s exclusive Kensington area. This may explain why housing investment is flooding into Manchester while some high rise residential tower blocks in London are being described as “ghost towers” as half the flats fail to sell. With the huge amounts of money flowing in and the high investment returns, can property developers really not afford their public obligations? Scrutiny of the viability assessments may provide the answer to that question.

Silver points out that there are some upsides to this rapid house building program for a cash strapped local authority severely affected by austerity cuts. The estimated contribution to council tax from the 25,753 units is £30,903,600. But the roundabout to this swing is that Silver believes the increasing financialisation in housing is playing a part in increasing the cost of buying a house or renting across the city region.

“It is important to note there are many more units being planned” Silver warns in the report. He also provides hope in the example of the then London mayor, Ken Livingstone managing to force through 35 to 50% affordable housing in many developments across the capital. He also expresses support for the current London Mayor, Sadiq Khan, and his inquiry into foreign property ownership, and suggests a new tax to capture some of the value of the land in our cities may help govern increasing financialisation. Silver also states the importance of civic organisations and social movements in campaigning against the multitude of factors making up the housing crisis and the effects of housing financialisation:

“Groups such as Greater Manchester Housing Action provide both important support and new ideas to help develop a city in which housing is built as homes, not assets. These groups and the ideas and inspiration of the wider public are essential to addressing the housing crisis and are intimately tied to creating a democratic, transparent and progressive city-region”