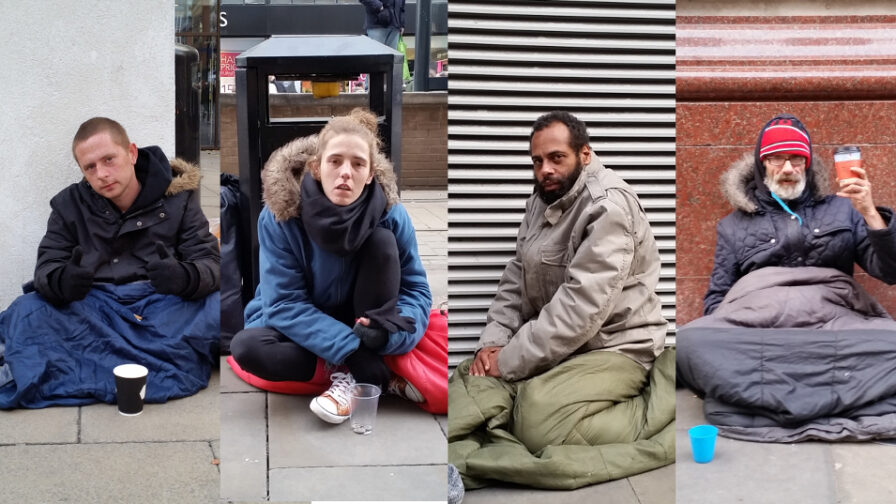 Councillor John Blundell strongly proposed in Manchester Confidential that Manchester City Council should start fining “aggressive beggars” as it is “the only solution” to what he describes as “organised begging”. His use of the term “beggar” comes off the back of Manchester City Council leader Richard Leese in his leader’s blog describing Christmas as “peak begging season”.

This terminology, as well as being dehumanising and divisive, is ultimately a distraction. People are on the streets of Manchester asking for money not out of some aggressive plot to prey on the kindness of Mancunians, but simply to survive in a system that has failed them. Using language in this way obscures these wider systemic issues and feeds into the othering of homeless people, encouraging indifference and fear.

Central to Blundell’s call for fines is the idea that homeless people are being driven to ask for change by a profit incentive. This is a distortion of the reality of the situation. By seeing the street homeless population as individuals seeking economic opportunity, he is wilfully ignoring the structural forces that have led to an explosion of street homelessness.

Two key factors are driving the increase in homelessness both in Manchester and nationwide. The first, as Sam Wheeler pointed out in his recent response to Blundell, are the cruel austerity measures that have been introduced in the UK since 2010 by the Conservatives and their Liberal Democrat allies [Previously covered in The Meteor, here and here ].

The number of street homeless has increased by 134 percent since the Conservatives came to power. This is largely down to cuts to housing benefit and the increasing conditionality of welfare benefits, actions which have driven people into destitution. Once on the street, people have been unable to find help, again due to recent cuts to services, leading to a further entrenchment of health issues and support needs. Eighty percent of homeless people have received no help from social services after being moved on by the council, while mental health services have seen cuts of £538m per year since 2010.

The second factor is the structural failings of the housing system. Homelessness doesn’t exist in isolation – it is fundamentally connected to the wider housing crisis. The destruction of council housing, brought about by Thatcher’s devastating Right to Buy policy and a ban on council’s abilities to borrow money to build, has left many of society’s poorest relying on the private rented sector (PRS) to get a roof over their head.

Ask yourself this – is it more likely that people decide to sit on the street in the freezing cold, asking for small change day in, day out, humiliated by blank-faced passers by; or that they are driven to this situation by sheer desperation? As journalist Matt Broomfield put it succinctly in a recent article in the New Statesman, “If people are desperate enough to beg, they need it.”

How can we even talk about reducing the “incentive” to beg through criminalisation, when begging is driven not by choice but from a severe lack of options?

The solution to homelessness, both in Manchester and beyond, must therefore lie in investing in our social services and fixing our broken housing system. The private rented sector must be stabilised and regulated, with rule changes such as those Scotland recently brought in becoming the norm across England too.

In Manchester, as well as other cities, we must move away from a developer-led development model based on a debunked trickle-down economic theory, and begin building the affordable council housing that people need. We must remove restrictions on the ability of councils to borrow to build. Ultimately, however, we must build a society where the ability to get housed isn’t reliant on your ability to pay. The mark of a civilised society is how its worse off are treated – and we can improve our society by providing homes based on the concept that it is a human right.

We need to show compassion for people who have been heavily impacted by the housing crisis and ideological austerity measures, not throw around clumsy phrases like “peak begging season” or back draconian calls for fines. We must stand in solidarity with those fighting on a daily basis against all odds to survive. But more than this, we must push for the progressive change both regionally and nationally that is needed to fix our broken housing system. Only then will we end the injustice of homelessness and live in a city that is run in the interests of people, not profit.