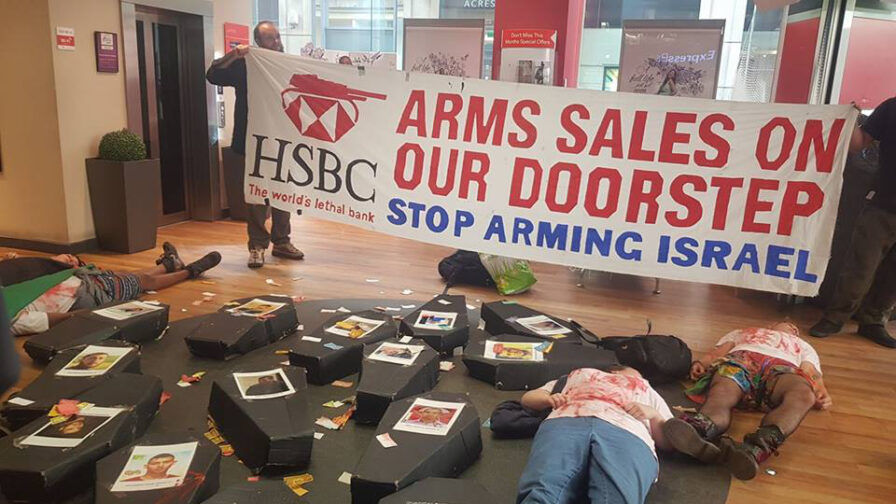 The high street bank HSBC’s investments in the arms trade came back to haunt them on Tuesday when pro-Palestinian activists occupied their branch in St Ann’s Square, Manchester, chanting: “your profits are covered in Palestinian blood”. The activists lay on the floor alongside child-size coffins to represent the multitude of Palestinians killed and injured over the pst 70 years, including 58 just the previous day killed by Israeli sniper fire. These events represent an ongoing humanitarian disaster for the Palestinian people, exacerbated by the US president’s decision to move the US Embassy to Jerusalem.

It is the investments by HSBC into Elbit Systems, Israel’s largest publicly traded arms and security company, and other arms traders that concern the members of Manchester Palestine Action (MPA), who occupied the bank. Elbit produces 85% of drones (Unmanned Aerial Vehicles, UAV) used by the Israeli army, including the Hermes 450 and 900 drones which Israeli forces can equip with two air to ground missiles, or targeting systems to mark a target for other aircraft to attack. Amnesty International reported, in 2009, that Israeli drones were identified as taking part in attacks that killed Palestinian civilians in Gaza.

UAV Engines is a subsidiary of Elbit Systems, with a factory in the UK, that manufactures engines for the Hermes range of drones. There have been repeated calls from MPA and Amnesty International for the suspension of all military exports to Israel. These calls have been rejected by the UK government.

After their peaceful demonstration inside the bank, the MPA members stood outside, where Adie Mormech spoke powerfully, explaining that the Palestinian people need help more than ever, with the attacks of the Israeli army leaving 58 dead and over 1,200 wounded the previous day, 15 May 2018, the 70th commemoration year of Al Nakba. ‘Also known as The Catastrophe’, Al Nakba was the beginning of a 70-year long humanitarian disaster for Palestinians which started with the expulsion of around 750,000 Palestinian Arabs from British Mandate Palestine by Israeli forces during the creation of the state of Israel. Since then Palestinians in the region have lived in an apartheid state and been denied basic human rights.

Mormech spoke of his time as a teacher in Gaza, when Israeli forces attacked, “500 children were killed in 50 days, one of them was my ex-student, and her entire family” He also urged the growing crowd to look up the story of a particular Palestinian family in the Zeitoun district of Gaza, “the Samouni family, 29 family members murdered in three days. 21 with one bomb.” Mormech asked one of the surviving daughters, 11-year-old Mona Samouni, who was his student, what message she had for people in England. He said her reply was:

“Take care of your parents. I don’t have any parents anymore and I can’t take care of them.”

After the demonstration at HSBC, the campaigners held a vigil outside the Central Library on St Peter’s Square. They then marched up Oxford Rd and held a sit-in outside the University of Manchester, where the names of the 58 Palestinians killed yesterday by Israeli snipers were read out. On the previous Saturday MPA had also set up a Nakba refugee camp on Piccadilly Gardens (below).

In 2017, HSBC held investments worth £832 million, with companies that provide equipment to the Israeli military, according to a report released by War On Want. This included investments with Elbit Systems (£4 million) but also in other companies that profit significantly from selling equipment to the Israeli military: BAE (£181 million), Babcock (£27 million), Rolls Royce (£53 million) and Boeing (£102 million).

Mormech finished off outside HSBC bank by urging the listening crowd to:

“Make that connection between your high street bank and what they are investing in, and what is happening on the ground somewhere around the world. Because those human beings are just as valuable as you are, and they care for their kids just as much as you care for yours.”

Civilian deaths due to drone use are on the increase. Read our previous story: ‘Murder anyone, anytime, broadly anywhere’ – the US & UK drone strike assassination programme

Video of die-in at HSBC in Manchester – click here