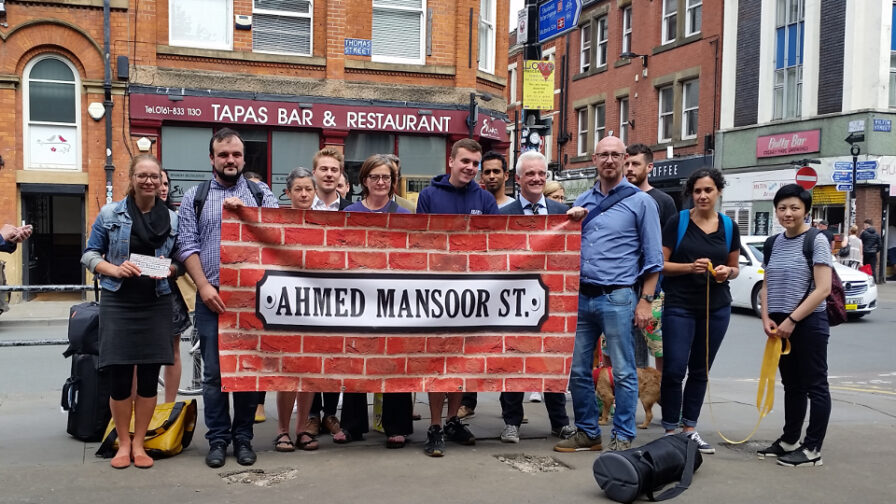 A bid by human rights activists to rename a street after Ahmed Mansoor was refused by Manchester city council. When Mansoor was jailed for ten years in the United Arab Emirates for tweeting about human rights abuses in his country, the activists decided to rename the street themselves, with an unofficial mayor doing the honours.

The latest arrest of Mansoor occurred on the 20 March 2017, when Emirati security forces stormed his home in the early hours of the morning. He was detained for using social media to “publish false and misleading information” that could harm the country’s reputation according to the UAE’s official news agency. He was held in a secret location for over a year with no access to legal counsel, and very limited visits by family. He was sentenced to ten years in jail on 29 May 2018.

Loz Kaye, a seasoned campaigner in Manchester, did the honours (as an unofficial mayor) of renaming Thomas Street in the Northern Quarter of Manchester, on 1 June. Kaye said that when it comes to free speech:

“Ahmed Mansoor is the real deal, in speaking out about the UAE he has shown a kind of bravery I hope that none of us here today are ever called on to find. His jailing for 10 years sends a chilling signal and is a devastating blow for freedom of expression in the UAE.”

“There are many abuses all around the world, its true.

“But in Manchester, this is an abuse that we have the power to do something about. As a city, we have supported the regime in the UAE and we have signed deals with them.”

And those deals are big ones. Sheikh Mansour bin Zayed al-Nahyan, the UAE’s deputy prime minister and member of the ruling royal family, owns the Abu Dhabi United Group (ADUG). This group entered a £1 billion property development deal with Manchester City Council (MCC) in 2014, forming the Manchester Life Development Company (MLDC). Initially, the ADUG was involved with MLDC through an offshore company called Loom Holdings in the tax haven of Jersey. After a number of news reports pointed this out, Loom Holdings was removed as an entity with significant control of MLDC and replaced by Sheik Mansour himself. The ADUG are also the owners of Manchester City Football Club, which they bought in 2008.

It is not just human rights abuses in  Mansoor’s case that concern campaigners. The UAE has a terrible human rights record on many counts, including: arbitrarily restricting freedoms of expression, using anti-terrorism law to criminalise peaceful criticism of state policies, torture and ill-treatment of detainees, discrimination against women, migrant workers facing exploitation and abuse and even Al Nahyan royal family members convicted (in Belgium) of degrading treatment and trafficking in persons.

City council leader Sir Richard Leese responded, in 2016, to a letter from Human Rights Watch and Amnesty International asking the council to take steps to support victims of human rights abuses in the UAE. Leese responded by saying the Abu Dhabi government were “exemplary business partners” and that the “alleged” abuses detailed in the letter were beyond the council’s sphere of influence. Sir Howard Bernstein, who was in 2016 still chief executive of MCC, is now a director of Manchester Life (alongside Richard Leese) and has also landed a lucrative job with Manchester City FC as a development advisor.

“Street naming is not my department, but long-standing policy is to not name streets after anybody still living or with no connection to the city.”

Nicholas McGeehan is a researcher and writer who has been supporting Ahmed Mansoor’s campaign and has previously published an article connecting Manchester’s financial links with the UAE, and the appalling human rights abuses occurring in that country. At the street naming ceremony, McGeehan said that he and other campaigners thought this issue was too important to accept the council’s decision, so they had decided to go ahead and do it anyway. He went on to say:

“The UAE are very powerful economically, strategically and militarily. But they are also quite weak in the sense that they are very public relations conscious. So my hope is that if you can apply enough pressure, to their Achilles heel if you will, then you may actually move somewhere on it and you might actually increase the pressure to get guys like Achmed out of jail.”