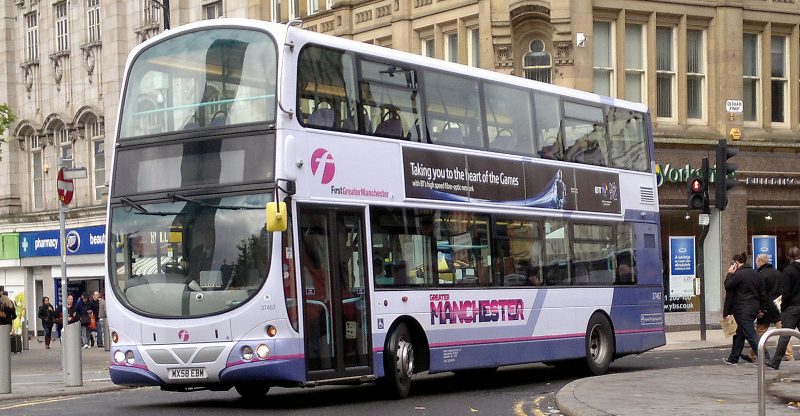 The metro mayor said the “deregulated” bus network had “not been driven by the needs of our communities, but by bus operators’ responsibilities to their shareholders to make a profit… We can only change that and hold the decline if we bring the buses back under the control of the public.”

Mayor Andy Burnham confirmed yesterday Greater Manchester’s bus network would be brought back under public control, in a landmark decision which will see the first UK city region outside of London take back control of its transport system from private operators in 36 years.

This game changing decision for public transport in the region means Greater Manchester will receive a London-style franchising system, with an integrated ticketing transport network across buses, trains and trams.

The Greater Manchester Combined Authority (GMCA) and councils will set fares, routes and timetables instead of private companies, while operators will be able to continue to run services.

The new system will be introduced in phases, first in Bolton and Wigan in January 2023, before seeing the whole of Greater Manchester move to a fully franchised system by the end of 2025.

Announcing the reforms at Ashton-under-Lyne interchange, Burnham said that privatisation had led to “35 years of rising fares and routes being cut”.

Some areas in Greater Manchester the mayor said had “no services at all”, ticket prices had risen and routes had been cut, while passenger numbers had halved.

“The decisions about bus services, when and where they come and how much they cost, have been made by commercial operators.There are over 30 of them in Greater Manchester, operating hundreds of routes with over 150 ticket types.

“This deregulated system has not been driven by the needs of our communities, but by the bus operator’s responsibilities to their shareholders to make a profit. We can only change that and hold the decline if we bring the buses back under the control of the public,” Burnham said.

The reforms will cost £135m, TfGM estimates. Burnham says the scheme is affordable with around £78m paid for through the government’s devolution deal, £33.7m in present and future mayoral precepts, £17.8m from councils and the remainder made up by £5m in pooled business rates income.

After the initial £135 million costs for setting up the franchised system, TfGM predicts annual net financial gains for the conurbation in the region of £350 million.

Burnham said he had considered the option of adopting the enhanced partnership model, which bus operators said would have given GMCA more control over services without council taxpayers facing all of the revenue risk if patronage declined, as it had during Covid-19. A spokesperson for bus operator Go North West said:

“We are liaising with TfGM on creating a system that works best for passengers. Arrangements for a smooth transition will be needed, and we have suggested that as an interim step, TfGM and all operators come together to create a partnership to rebuild passenger numbers after the Covid-19 pandemic.”

Burnham conceded that franchising would be financially riskier for the city region, but said the need to provide better services to communities outweighed that risk.

Private bus operator bosses have branded the plans as “flawed” and are challenging Burnham in the courts. Both Stagecoach and Rotala have submitted separate applications for a judicial review of the plans, both of which will be heard in court in May. Burnham said there had been a failed attempt by the bus operators to stop the announcement being made two days ago.

Public transport campaigners, who have campaigned tirelessly for bus reform for years, were jubilant at the news of Burnham’s decision. Pascale Robinson, a campaigner from Better Buses for Greater Manchester, said:

“This decision has been a long time coming, but is absolutely game-changing for public transport across Greater Manchester. Bringing our buses into public control will transform our bus network so that it can work for passengers, rather than for private profit.

“For too long private bus operators have used our buses as a cash cow, sucking juicy profits out of the network while cutting routes and undermining the rights and conditions of workers.

“Today’s decision is an important step in consigning that deregulated system into the dustbin of history. Andy Burnham can now have control over who the network serves, so all communities have a service and staff can be offered region-wide pay guarantees.

“With Andy Burnham making the right call today, it’s now time for the mayors of England’s other city-regions to follow suit, and deliver a proper bus service, run for the benefit of our communities up and down the country.”