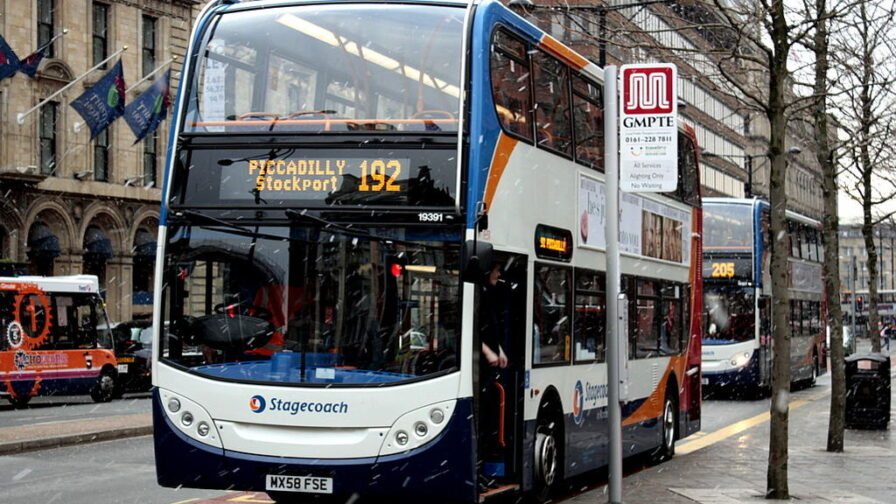 “On balance, it is in the public interest to make the proposed franchising scheme,” TfGM chief executive Eamonn Boylan told GM council leaders, as they gave the green light on re-franchising the city region’s buses.

In a landmark Special Meeting held by the Greater Manchester Combined Authority (GMCA), council leaders voted in favour, by 9-1, of proceeding with a plan to take back control of Greater Manchester’s bus network from private operators. It sees Greater Manchester move one step closer to being the first UK city outside of London to re-regulate its buses since Margaret Thatcher deregulated the industry in 1985.

A public consultation on the options available held by the GMCA saw 83% of respondents come out in favour of the public transport franchising model. The combined authority intended to make a decision, before Covid-19 hit, on whether to proceed with the proposed bus franchising scheme in spring 2020.

In light of Covid-19’s huge impact on bus patronage, the GMCA carried out a second consultation on the regulation plan. The results showed a ‘high level of public support’ for the franchising idea.

Introducing the item at the meeting, TfGM chief executive Eamonn Boylan told council leaders that bringing buses under public control remained the best option for a post-pandemic economic recovery. “TfGM remains of the view that, on balance, the value of money of the franchising scheme is likely to be robust against uncertainty created by COVID-19 in all reasonable scenarios,” Boylan concluded. “On balance, it is in the public interest to make the proposed franchising scheme.”

According to TfGM, around £135m would be needed to transition into the franchised system, to be funded through a combination of one-off local authority contributions, income from previous and future rises to the mayor’s precept and cash returned by the government under Greater Manchester’s devolution deal. One council leader, Bolton council leader David Greenhalgh, voted against the plan.

Stagecoach launched a legal challenge against the GMCA’s plans after labelling the consultation around the reforms as “flawed”, and raised concerns about the plans to spend £135 million on reforms at a time when local councils are having to cut millions from their budgets.

TfGM has said it would fund franchising through a combination of one-off local authority contributions, income from previous and future rises to the mayor’s precept, and cash from the government under Greater Manchester’s devolution deal.

“Passengers will be really happy to see that the overwhelming majority of Greater Manchester’s leaders echo their support for public control of our buses. The pandemic has strengthened the case, showing how vital it is that we can direct bus companies to run routes that workers need.

“The bus companies have had 30 years in the driving seat, able to control fares and routes, and they’ve failed. Our buses have been expensive and unreliable for years while London’s publicly controlled network means £1.50 flat fares and regular buses all across the region.

“Now it’s time for Andy Burnham to make the decision to bring our buses into public control now. He can finally ensure that passengers and staff get the respect they deserve, with no cowboy companies firing and rehiring their staff involved and a service for every community across the region.”

Andy Burnham is expected to make the final decision on whether to accept the bus franchising model this week.