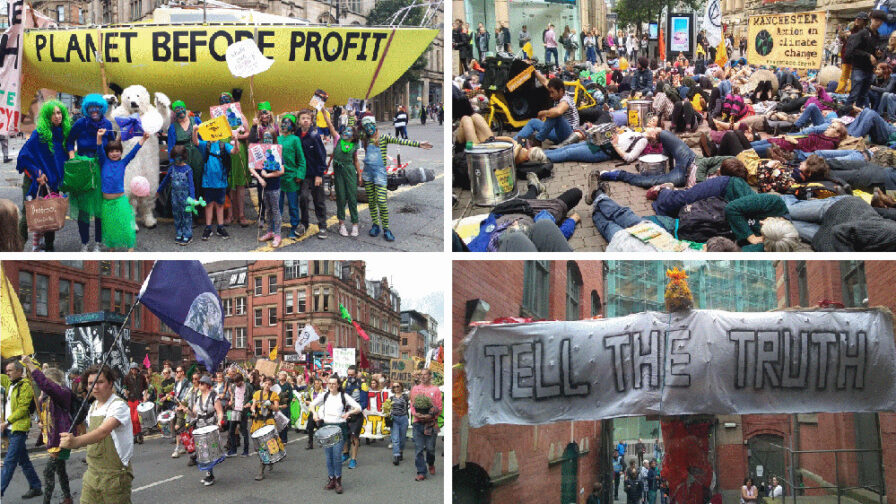 Extinction Rebellion are creating a new paradigm for environmental protest. Their four day Northern Uprising across Manchester city centre last weekend raised awareness of the climate crisis we are in and the urgent need to act now. This uprising paves the way for the International Rebellion which starts on the 7 October.

Extinction Rebellion’s Northern Uprising took over a section of Deansgate for four days to draw attention to the climate crisis. From Friday 31 August to Sunday 1 September, they ran workshops and lectures on various subjects related to the environment, which included family-friendly activities. This was followed on Monday by a day of peaceful actions across the city centre.

Claire Stocks of Extinction Rebellion has called the event “a real triumph.” She says, “We wanted to create a space to highlight the inaction on the Climate Emergency and create a space for creative engagement, not just people shouting about how bad things are.”

The “occupation” drew some criticisms in terms of disruptions to traffic and two restaurants told the Manchester Evening News that custom had been down. However, several businesses reported sales were up in research conducted by the WalkRide campaign group. Disruptions to traffic appear to have been minimal with no reports of major traffic delays.

Extinction Rebellion informed Manchester Police two and a half weeks before the protest that they were coming. Stocks says, “The police facilitated the protest extremely professionally and effectively.”

Police I spoke with on site on Monday called the protest “good natured” and didn’t report any major issues.

Following the weekend of workshops and lectures, a day of action took place on Monday. A feature of the day was the ‘People’s March’ that set off from Deansgate on a five-point whistle stop tour of Manchester’s “horrendous places”. It was led with much fanfare by the group’s samba band. At each site, an activist made a short speech, which was followed by a ‘die-in’, in which protesters rest on the ground to represent the species’ extinction if climate change isn’t curtailed.

Each die-in lasted 11 minutes to represent the number of years scientists say are left to turn the climate crisis around. One exception was outside Primark, where the die-in lasted just six minutes so as not to hold up traffic. Here’s a look at each die-in in more detail:

The first stop was Barclays to protest the bank’s investment in fossil fuels and fracking. Last year, Barclays invested £20 billion in fossil fuels, according to a recent report from the Rainforest Action Network and BankTrack Group. In its defence Barclay’s stated that it has invested £27 billion in green bonds during the same period. The World Wild Life Fund has criticised the frameworks and guidelines around green bonds, saying:

“Focussing on promised environmental impacts rather than actual performance raises the risk of greenwashing if bonds are issued and perceived as green, while only achieving minor or in fact no actual environmental benefits.”

Nine people glued themselves to the pavement outside the bank earlier in the day in protest against Barclays substantial fossil fuel investments. One protester told news crews “Barclays has been increasing investments in fracking … right now we can’t be increasing investments in these things, we have to be cutting back on these things for the safety of our planet and everyone on it.” The group eventually unglued themselves and no arrests were made.

Next up on the march was the fish market at the Arndale, where Animal Rebellion, who are in solidarity with Extinction Rebellion (aka XR), spoke:

“We’re here because the science is clear – animal agriculture and fishing industries are a leading cause of climate change. At the moment the Amazon is burning because of our appetite. The animals and indigenous tribes are losing their homes.”

The protesters then marched through the Northern Quarter and onto Great Ancoats Street to Central Retail Park (CRP), which Manchester City Council wish to use as a 440-space temporary car park for up to five years.

Joanne Cross from the Northern Quarter Forum spoke on behalf of the Trees Not Cars campaign group. Gesturing to the buildings around, she said “All these apartment buildings are full of people, people who have no green space.” She asked everyone to sign the petition that’s garnered over 9k signatures, which asks the Council to use the site as public green instead. Many protesters had carried plants on the march and left them at CRP to donate to the ‘People’s Park’.

The group then headed back into town, through Piccadilly Gardens and onto Market Street to protest ‘fast fashion’ in front of Primark. A young XR protester spoke, saying:

“We need to really think where we’re putting our energy and resources into, and it shouldn’t be exploitative fast fashion, not only for the resources we use, but also how it’s made, where it’s made, how the people are treated where it’s made.” She referenced the collapse of a Primark factory in the Rana Plaza building in Bangladesh, in 2013, that led to the deaths of 1,100 people.

This was the most contentious die-in, where protesters blocked the thoroughfare, including one set of tram tracks. This led some to believe the action was against the trams, rather than the fashion industry, who then went on to criticise XR for blocking a green form of public transport.

The protest then marched through Market Street to HSBC in Queen Anne’s Square to protest their investment in fossil fuels. A speaker clarified that the protest was not against people who bank with HSBC or work for the bank, but those “at the top” making the decisions about where investments are made.

Following the die in, two protesters glued themselves to the glass and unglued themselves soon afterwards. The bank was closed for a short period with at least two dozen officers in attendance.

The march then returned to Deansgate and met the Rising Up! Manchester Families (RUMF) group who had gone to the Greater Manchester Pension Fund to protest the £2 billion invested in fossil fuels in the past two years. The group handed out cards made by the children, requesting GMPF invest in local climate solutions instead.

“It is so hard explaining to my five-year-old Maia that not only is not everyone fighting for our future but that many are still making money from its destruction.” said Rose Arnold, one of RUMF’s organisers.

“Maia thought perhaps they [who work at GMPF] didn’t have children, or maybe they didn’t know what was happening. She wanted us to let them know.” The parents and children dressed up as Ethel and the Earthlings, which Arnolds said “is a playful way for younger children to engage in what are big and scary questions without being terrified. They are asking GMPF to think of their futures”

The day also included a protest outside the High Court, where three fracking protesters were facing court action by energy company Cuadrilla.

Last year, the activists blocked the entrance to Cuadrilla’s shale gas exploration site in Lancashire, after the company had received an injunction restricting protests the month before. The group sought to vary the terms of the injunction order. The Court ruled to give them suspended prison sentences.

Manchester Friends of the Earth, who planned to support them in Court, were “frozen out of court proceedings” after Judge Mark Pelling QC refused to provide cost protection.

Overall, no arrests were made across the four days and the protests came to a peaceful end with a closing ceremony that included a few short speeches, reflection, and singing. A model of the ‘Angel of the North’ landmark, made from single use plastic and placed outside House of Fraser during the protest, was then marched to the People’s History Museum (PHM).

Extinction Rebellion hope the angel will remain on display at the PHM until 7 October when the International Rebellion begins in London.

Feature image and all in article images: Andrea Sandor