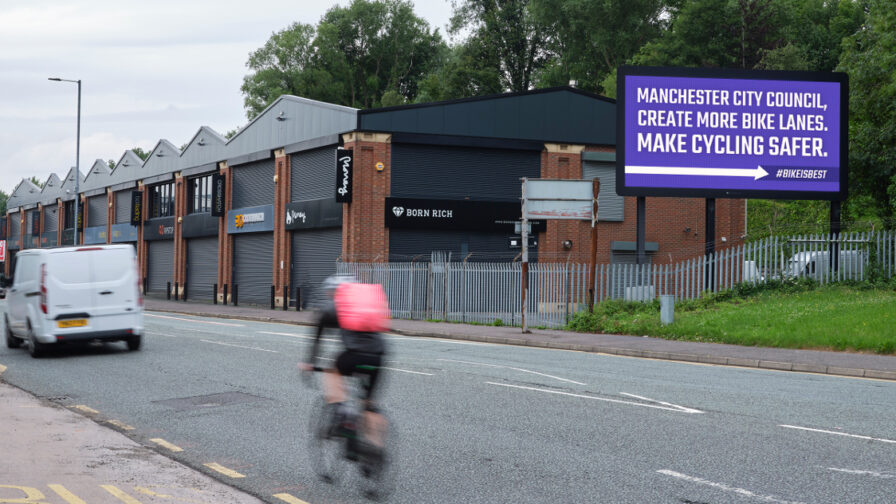 The national #bikeisbest campaign has put up billboards on the A6 and A56 calling on Manchester City Council to create more bike lanes. Adam Tranter, Coventry’s bicycle mayor and the campaign organiser, says “If we’re to become a cycling nation, Manchester has to get this right.”

For the next week digital billboards on the A6 and A56 will display an advert calling on Manchester City Council (MCC) to create more cycle lanes. It is part of the national #bikeisbest campaign where over 50 cycling organisations have combined forces to promote everyday cycling.

The campaign is organised by Adam Tranter, Coventry’s bicycle mayor and CEO of Fusion Media. He says MCC is currently the only local authority being named by the campaign’s billboards. The signs in Manchester are situated on the corner of Kale St and the A6 just outside the city centre, and on the A56 Bury New Rd, near the junction with Waterloo Rd.

The campaign is running a series of billboards across the country promoting everyday cycling but, apart from Manchester, do not name the local councils they are situated in. “If Manchester can’t get this right,” Tranter says, “There’s little hope for other cities.”

In the past month, MCC has come under fire for refusing to create temporary pop-up lanes as part of plans for a regional pop-up cycle network. In responses to public backlash, the council said they would “work with” neighbouring councils creating pop-up lanes to ensure the safety of all road users. However, weeks later these pop-up lanes have failed to materialise, prompting protests for pop-up lanes last week.

Last Wednesday, XR created a pop-up lane on the 300m stretch between Trafford’s border and the city centre. The pop-up lane was removed by MCC later that day and not replaced with their own.

On Saturday, the A6 Cycle Campaign held a protest, demanding MCC create pop-up lanes to support neighbourhoods with particularly low car ownership and a higher proportion of BAME residents.

The protests prompted Tranter and the #bikeisbest campaign to put the billboard on the A6. “Manchester City Council seem to say they believe in doing something, and then they don’t do it. I saw what XR and others did last week and thought ‘We need to step up’.” He says the campaign felt they needed to put pressure on MCC to create pop-up lanes on the A6. “Places like Ardwick, where car ownership is low, could really do with temporary and permanent infrastructure.”

Greater Manchester (GM) is meant to be pioneering a regional ‘Bee Network’ of cycle lanes across all 10 boroughs. Chris Boardman was made the UK’s first cycling commissioner in Manchester and has been working with Mayor Andy Burnham to realise the regional cycle network, which Burnham says could become a blueprint for the rest of the country.

Tranter also points out that cycling in GM is increasing year on year. Data from Transport for Greater Manchester shows there was around an 80% increase in cycling from when lockdown started on 23 March till the 30 May. “We know the area is ripe for temporary and permanent infrastructure.” Because Manchester is the blueprint, Tranter says, “I genuinely believe that if we are to become a cycling country, Manchester has to get it right.”

The billboard not only marks an escalation in campaigning for pop-up lanes in Manchester, but indicates the national spotlight is still on Manchester after Lord Berkely raised the issue in the House of Lords in early June.

It also suggests there’s growing awareness more broadly of the weakness in the GMCA structure where decisions must be unanimous and a single council can essentially veto the region’s plans.

Last week, councillors were told MCC’s Neighbourhood and Environmental Scrutiny Committee would review the decision not to create pop-up lanes. However, the discussion seems to have been deferred to a closed meeting at an unspecified time in the future.