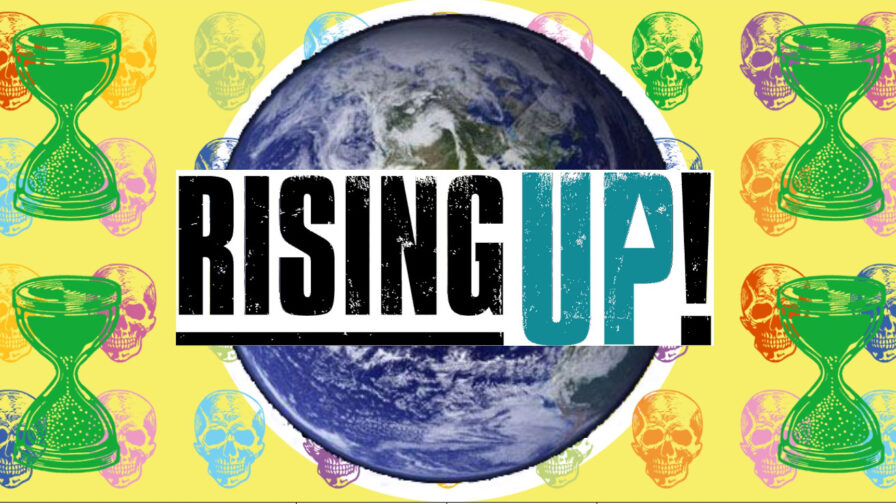 Next Saturday 1 June, family climate action group Rising Up! takes to Manchester streets with A Carnival of Creatures to raise awareness and demand that action is taken to protect nature.

There will be animal and insect parade puppets, children in costume, circus folk and musicians, with activities leading up to the Carnival.

Local families are to march next Saturday, 1st June, to demand action on species loss via A Carnival of Creatures, a colourful parade featuring animal and insect parade puppets, children in costume, circus folk and musicians.

It’s being organised by family climate action group Rising Up! to raise awareness of the sixth mass extinction that threatens our future. A recent UN report on biodiversity confirmed that life on earth is in serious trouble…  “Nature is declining globally at rates unprecedented in human history” it stated “And the rate of species extinctions is accelerating, with grave impacts on people around the world now likely.”

A 2016 report, State of Nature, showed the UK is “among the most nature-depleted countries in the world”, with most of the country having gone past the threshold at which “ecosystems may no longer reliably meet society’s needs”. One in ten of our species are currently threatened with extinction and there are continuing declines in species such as skylarks, hedgehogs, many insects including butterflies and corn marigolds.

“There have been an increasing number of protests about climate breakdown, as groups from Extinction Rebellion to striking school children and recently the Mother’s Rise Up march in London make their voices heard” state the organisers “Rising Up! Manchester Families aims to make it possible for families to be active in demanding a safe future for their children, and make their voices heard by making protest family friendly and enjoyable. This protest will have a carnival feel, the focus is on celebrating life and rallies behind the call to ‘love life, not lose it’.”

Cultural venues, including  Manchester Art Gallery, Hulme Community Garden Centre and the People’s History Museum will be running activities in the lead up to the day and beforehand…*

“The rate at which we are destroying our wildlife is terrifying, I am genuinely worried about what sort of future my children are going to face” says Jennie Gibson, 34, a mum of two from Levenshulme “We need individual and societal action to tackle this issue, which means as well as me doing my bit at home I fully expect my local council to be playing their part in the protection of the living planet too.”

Rising Up! organiser and mum Rose Arnold underlines the sentiments…

“There’s a huge amount which we could do differently” she says “We’ve got loads of demands for the council, from not mowing and spraying verges and grass, not building on greenbelt and destroying habitat of red listed endangered species and some exciting ideas for garden projects and bee highways across the city. We have the bee as our city emblem and emblazoned over everything. Let’s make Manchester a good place for actual bees. Our lives depend on turning this around. Which is a heart-breaking thing to face as a mother…”

A Carnival of Creatures begins outside All Saints Park, Manchester at 1pm, with departure at 1:30pm on Saturday 1st June.

Artists Carly Bainbridge and Jayson Gylen are on hand to help you make a parade-worthy prop to bring on the Carnival of Creatures. You can also make a placard demanding action on climate breakdown to display on the front railings. There will also be a climate scientist on hand to answer questions. Manchester Art Gallery, Mosley Street, Manchester M2 3JL

A jam-packed session with nature, art, face painting, a chance to make wings to wear in the Carnival of Creatures, storytelling and play. Manchester Museum, The University of Manchester, Oxford Road, Manchester M13 9PL

Featured image: composite of images from Rising Up!