As prorogation battles commence, the Peterloo exhibition in Manchester becomes ever more relevant 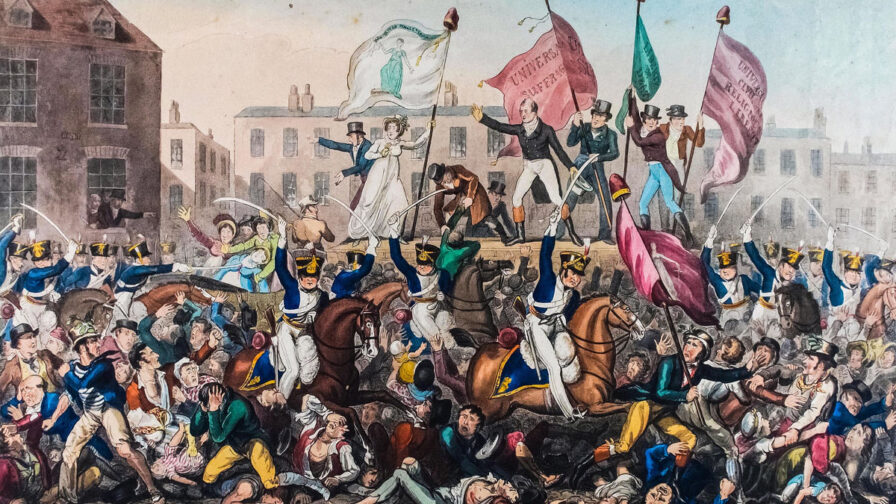 The Peterloo bicentenary weekend commemorations may be over, but if you missed them and want to know more about Peterloo, and its relevance to today, then Disrupt, Peterloo and Protest at the People’s History Museum is for you. With the current plans for prorogation of parliament, causing a crisis in our democracy, the exhibitions theme of ongoing struggle for democratic reform are particularly compelling. The exhibition includes original Peterloo artefacts displayed side by side for the first time, and a short film commissioned for the exhibition brings the story of Peterloo to life.

On 16 August 1819, over 60,000 people gathered peacefully in St Peter’s Field, Manchester, to protest for rights and representation. They came from all over Lancashire, dressed in their best Sunday clothes, marching in disciplined columns behind banners and flags to hear speeches calling for parliamentary reform.

For the vast majority of the working classes, things were going from bad to worse. Economic conditions were worsening in the midst of the post-Napoleonic depression. Unemployment was chronic and hunger was rife, exacerbated by the Corn Laws which enhanced the profits of land owners at the expense of higher food prices for everyone else. The working class had no representatives in parliament to fight their cause. Only 2% of the population (and no women) had the vote. Manchester, a city with around 100,000 people, did not return a single MP to Parliament.

On the day the protestors gathered on St Peter’s Field, yeomanry cavalry were ordered by the local magistrates to arrest speakers at the event such as Henry Hunt. But they did not confine themselves to seizing Hunt, they charged the crowds with sabres drawn making a deliberate attack on the protestors themselves. Eighteen died on St Peter’s Fields that day, with a further 654 casualties.

One of the first things you see upon entering the exhibition is an extremely provocative drawing called Universal Suffrage, printed in July 1819. It depicts ‘Revolution’, a many-headed monster, with fanged jaws and breathing fire, standing menacingly on top of a pile of cherished British institutions – a sceptre and crown representing monarchy; the scales of Justice and Magna Carta; a plough; a palette and brushes; and two British flags. “An Allegory to demonstrate the fatal consequences of ‘Radical Reform’ in plain English Revolution,” warns its caption.

The drawing shows us what the Peterloo protestors were up against. Warning of the dangers of giving the masses too much power over their lives, it perfectly encapsulates the ideology of authority at the time; of the political establishment’s dread of universal suffrage, their fear of the spectre of ‘mob rule’. Above all, it provides an explanation of the authorities’ motivation to mow down the Peterloo protestors: radical reform with widespread public support has created a monster that threatens to destroy the status quo and must be met with force. The exhibition succeeds in framing the protest as a brave act against the odds, while capturing the hostile environment created by a political establishment resistant to democratic reform.

In the event’s wake, the UK Parliament passed the Six Acts, a draconian set of measures designed to outlaw freedoms of speech and assembly. Resistance was widespread and many flouted the Six Acts to express their outrage in print. In ironic reference to the military triumph of Waterloo four years earlier, the Manchester Observer dubbed the event ‘Peter Loo’. Most famously, the massacre prompted Percy Bysshe Shelley’s The Masque of Anarchy, where he urges the working classes to rise up against injustice:

Rise like lions after slumber
In unvanquishable number—
Shake your chains to earth like dew
Which in sleep had fallen on you—
Ye are many—they are few.

In ironic allusion to the infamous acts passed in Peterloo’s wake, The Six Acts to Reboot Democracy campaign aims to harness the widespread disillusionment of our political system in society today in order to address its issues. It is designed to crowdsource ideas for rethinking democracy, and their website is still open to submissions for ideas to reform democracy.

The legacy of Peterloo has been contested for centuries, conservatives contend that it was practically non-existent. Peterloo was a tragedy, they claim, but it was not a turning point in our history. England’s ‘successes’ were engineered in the centres of privileged elites, far removed from the people. A Times editorial just last week concluded that Peterloo “had no wider historical significance and did not change Britain”. David Finkelstein wrote last year, “Britain’s modern history was shaped in factories and parliament… not on the street.”

The implication of this reading of Peterloo is that Britain’s political elites granted us our rights out of generosity, in the absence of any popular struggle. This could not be further from the truth.

Peterloo saw people articulating a new vocabulary of rights for individuals, handed down from the French Revolution in 1789. The ideas of liberty, equality and fraternity which emerged from it did not create revolution in England. But the English working classes clearly articulated the language of the French Revolution to critique the political system under which they were living. The only known surviving banner from Peterloo, currently held in Touchstone’s Museum in Rochdale, is embossed with the words “Liberty and Fraternity.” The evidence points to the fact that the Peterloo Reformers died promoting the idea that parliament should respect the rights of the individual and represent the people, not vested interests.

The People’s History Museum Peterloo exhibition therefore teaches us that the concept of political rights of the individual were as much a creation of the grassroots as it was of those in positions of power. By occupying public spaces, the working classes demanded radical reform to engineer liberty. Michael Powell, Programme & Learning Officer at the People’s History Museum, emphasised this point to me when I asked him about the exhibition. Peterloo, he said, showed people that they could play “a leading role in shaping and setting the national conversation on the fight for equality.”

Under-examining dissent and disruption has potentially disastrous consequences for public consciousness. The absence of a counter-narrative of protest allows for establishment apologetics; the notion that our freedoms and rights have been granted out of the kindness of those who govern us.

It is important to remember that many before us sacrificed so much for us to have rights and freedoms. “Power concedes nothing without a demand,” the African-American abolitionist Frederick Douglass famously pronounced. “It never did and it never will.” Dissent and protest from the bottom up are necessary preconditions for democratic freedoms.

British democracy today is facing serious challenges, and doubts as to whether our parliament really represents the interests of people who voted them in. Theory dictates that legitimacy in a democracy comes from the people, and yet our new Prime Minister Boris Johnson has been elected by less than 0.01% of the population.

Johnson wishes to implement no deal Brexit, a policy which was never a proposition during the Brexit referendum campaign; and plans to suspend parliament, by prorogation, to get his way. He also says he will refuse to quit if he lost a no-confidence vote. Johnson’s plans have been widely condemned as “anti-democratic”, and were the cause of mass demonstrations against Johnson across the country last weekend.

His appointment of the most right-wing cabinet ever (with four of the five authors of Britannia Unchained, a paean to deregulatory libertarianism, now in cabinet) signals to us that our rights to consumer protection are secondary to the interests of big business. Individual’s rights are subordinated to vested interests.

There are also structural issues at play too in popular disenfranchisement. With the House of Lords and our electoral system remaining unreformed and not fit for the 21st century.

Despite the many reforms that have been made to our democracy, inspired by the actions of protestors at Peterloo, recent events around Brexit have highlighted the fact that we have a long way to go still to get a truly representative democracy. The PHM Peterloo exhibition accommodates this ongoing struggle for reform by including a Protest Lab, a creative space which individuals, communities and organisations can use to develop and share their ideas for collective action.

With politics Professor Paul Whiteley describing the UK as a “flawed democracy”, and even the mainstream Economist saying that our political system is broken, it appears parliament is deaf to the demands of large sections of the British public, just as the elites in parliament were two hundred years ago.