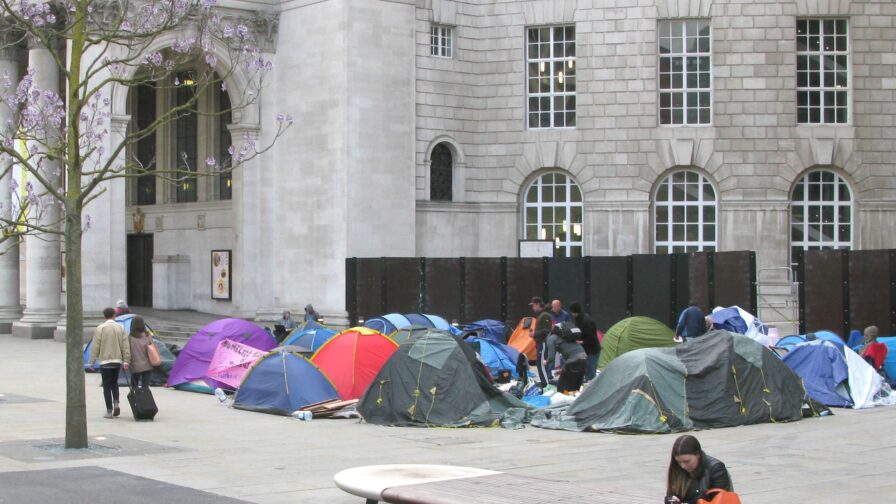 Manchester City Council launched a consultation yesterday to ‘promote a safe and welcoming environment across Manchester city centre’ – by introducing a Public Space Protection Order, or PSPO, to ban ‘Occupying a tent or other temporary structure…’, ‘Aggressive or intimidating begging’ and ‘Continuing to obstruct a building entrance/exit, stairwell or highway after being asked to move’.

Salford City Council already has six Public Space Protection Orders, or PSPOs, in place, making it an offence to do everything from taking more than six dogs onto kids’ and sporting areas and memorial parks and gardens, consuming alcohol when asked to stop in virtually the whole city, using an alley way off Dudley Street in Broughton (except to get to school), and ‘propelling objects’ in Weaste…

There’s also the infamous PSPO in Salford Quays that makes it an offence to swear, ‘deposit’ an animal into the water and hanging from a bridge. *

Anyone guilty could be hit with a £100 fixed penalty or £1,000 if prosecuted in court. The interpretation of these ‘prohibitions’ would be incredibly subjective and the final three offences could be seen as targeting the homeless and protesters.

“PSPO powers would not be used indiscriminately, only where they were the most appropriate option” states Councillor Nigel Murphy, Deputy Leader of Manchester City Council “It’s important to note that these restrictions are targeted at specific anti-social behaviours, some quite general in nature, not at particular groups of people. It must be stressed that our absolute priority remains to support anyone who is in need to connect them with services which can help them improve their lives…No decisions have been taken. This consultation will be crucial in shaping whether we proceed with proposals, and if so in what form.”