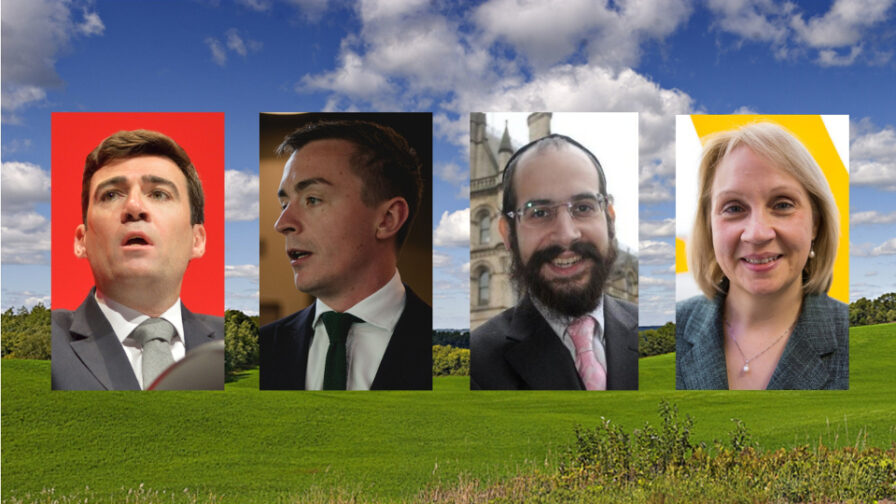 Air pollution produced in Greater Manchester (GM) has both local and global effects. Air pollutants such as nitrogen dioxide and particulate matter, which are produced in vehicle exhaust fumes, contribute to the ill health and death of many in the region, while the carbon dioxide produced as a result of travelling in vehicles or using energy to heat/power our homes contributes to global climate change.

If you want to clear your lungs of the urban exhaust fumes, get a breath of fresh air and take in some natural beauty, GM is blessed with a high proportion (47%) of easily accessible green belt land. The Greater Manchester Spatial Framework, a document setting out land for housing and industrial development, plans to reduce the amount of green belt land in GM by 8.2%, due to housing and industrial developments.

Air pollution in the UK is linked to 40,000 early deaths a year, and an estimated 5.9% of deaths in Manchester in 2010 were attributed to air pollution.

Our national government has been dragged through the courts twice in the last two years by ClientEarth, activist lawyers campaigning for environmental justice, over their abject failure to tackle the issue and adopt suitable plans to reduce air pollution levels to below EU set levels. The government has been ordered by the courts to deliver an effective plan, by the 31 July 2017, to tackle air pollution in the UK.

The Devo Manc devolution deal for Greater Manchester offers the elected GM mayor an opportunity to address the environmental problems such as air pollution within the region, and also make sure GM contributes to the fight against global climate change. The mayoral elections for GM are on 4 May 2017. This is the fifth of six questions asked of the candidates. Details of the other questions can be found at the end of this article.

“Greater Manchester is currently in breach of legal limits on nitrogen dioxide. This is a pollutant mainly caused by road transport and congestion. Exposure to unsafe levels of nitrogen dioxide can cause a range of respiratory problems – and experts say it costs thousands of lives each year.

We need a bold plan to improve air quality in Greater Manchester. That means more reliable and affordable public transport to encourage people to use our buses, trains and trams as an alternative to cars. For shorter journeys, we need to make cycling or walking the obvious and safe choice.

We also need to protect our green spaces. That’s why I’ve said the Spatial Framework needs to be radically rewritten, and if possible we should set the target of no net-loss of green belt.

I’m also calling for new powers from the Westminster Government to allow us to set up a Clean Air Zone in Greater Manchester to discourage the most polluting vehicles from entering the parts of our city-region where the air quality is poorest.”

“The green belt is a recognised planning policy that offers significant protection against development and I do not anticipate the government watering it down anytime soon. But this policy has to be balanced against the need to build more homes. There are a number of things that will help increase the density on sites that need to be regenerated. Look at how land owners accumulate land and then don’t bring it forward for development. How can you encourage that to happen?

The government last year announced a £2.3bn infrastructure fund. If it is a former factory site, or a site you can’t build on because there is no road going to it, you can bid for money from this fund to build the infrastructure so that site can come forward for development. I would make sure GM gets its fair share of that infrastructure pot.

All of that should be done first, amongst other things, before taking a look at where your green belt development goes. How do you phase development so that if green belt land is allocated for development you minimise the amount used, and time its development to encourage the market to go where it needs to.

Will I ever say you can never ever, ever, build on green belt? No, because that is the position the green belt is in today, the position where we are at the moment. None of the councils in GM at the moment meet their 5 year land housing supply targets. We have to prove that we have enough land to build the homes that we need for the next five years.

If you are a developer or landowner you can come and speculatively put an application to build homes anywhere. If you want to control where development goes and offer greater protection than what we do today to our green belt you have got to go through the Greater Manchester Spatial Framework. . The debate has become about individual sites and green belt in general, rather than how do we offer greater protection to our green spaces, provide more jobs, create a wealthier city, bring forward brown field sites. Nobody is talking about that. In this election I am going to tell people that these are things that we need to discuss and apply the same pragmatic, consensual approach that I have previously.

This then has a knock on effect with air quality and congestion in GM. Because if you don’t plan you don’t control where economic growth happens. You end up like Bristol, Bath, Cambridge or London, where your housing crisis, congestion, air quality and cost of living gets worse. It then rapidly becomes an issue that people want to be resolved.

We have a choice in GM about do you plan to allow your city the space to grow, so you can have a real discussion about how do you make communities greener, get buses that are more environmentally friendly, encourage the use of cycle lanes, have a new road infrastructure so we are alleviating pressure on the M60 and other roads. To be able to do that you need to have a very clear view about what we mean with that and we need to be bold enough to take a decision.

If we don’t allow the city the space to grow it gets squashed, you see it in Chorlton and Didsbury. Homes that were previously family homes are now six or seven flats in a house. You just squash the city make it a less desirable place to live, I don’t want that to happen. But that means you have got to come out and say what you will do about it.”

“With the rest of your questions [referring to this question on environmental issues and two other questions] it wouldn’t be fair for me to tie the hands of my members and the public who are assisting me in drafting our manifesto. I’ll have comprehensive answers mid-March.”

“I will fight to protect the greenbelt from over-development all I can. It isn’t acceptable that we are sacrificing our greenbelt across Greater Manchester when there are so many empty and underused buildings and derelict sites in our towns and cities which should be developed first. Pollution is a major problem. I will ensure that we measure it properly – which we don’t at the moment. Over the next decades we will need to be bold: both to reduce the journeys people need to take and make those journeys in less polluting forms of transport. The first can be done by avoiding the urban sprawl and greenbelt development, and instead building more in our existing towns and cities so people live closer to shops, offices and amenities. The second requires us to find ways to move towards cleaner transport like electric vehicles, trains, trams and cycling.”