Mayoral candidates for Greater Manchester on xenophobia and multiculturalism 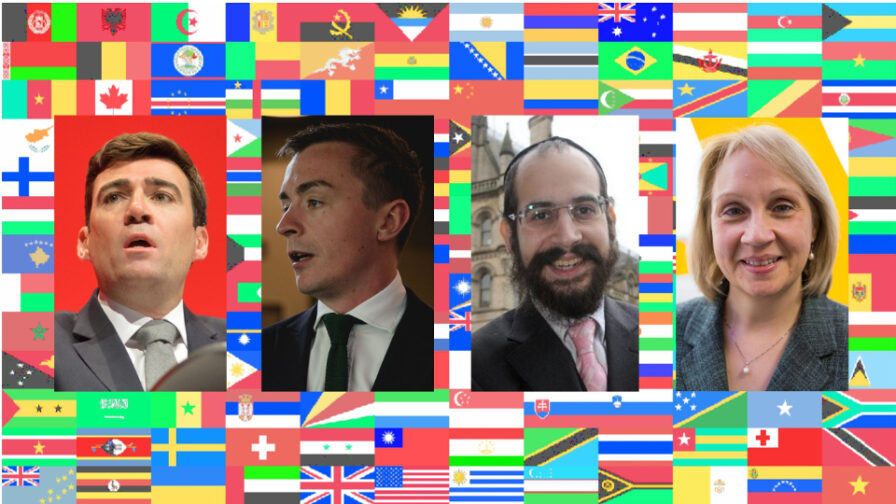 Since the EU referendum on 23 June 2016, when the majority of UK voters chose the ‘Brexit’ option, there has been a worrying rise in xenophobic abuse in Greater Manchester and across the UK. Far right individuals and organisations are increasingly questioning the benefits of immigration and our multicultural society.

Manchester was horrified at video footage of three young men racially abusing and throwing beer over a US army veteran on a Manchester tram. Robert Molloy was last week sentenced to six months in prison for this vile attack. Another man was arrested for submitting a mixed race passenger on a Salford bus to an extended tirade of abuse. In the attack, which occurred on the 3 February, the abuser threatens to “bounce this can in your face’ and calls his victim ‘a dirty little black c*nt’.

A video produced by The Meteor post Brexit in Manchester captures the moment where a Greek woman, in a public area, is told to “f*ck off to where you are from” by a passing abusive xenophobe.

Britain First is one of the political organisations spurred on by Brexit to promote their far right agenda, in which opposition to multiculturalism is embedded. They have recently been active in Oldham, which they describe on their website as “infamous as a nest of Islamists and extremists”. The rise of far right political parties is a story that is being repeated across Europe, the Front National in France and Alternative fur Deutschland in Germany being prime examples.

The Devo Manc devolution deal for Greater Manchester offers the elected GM mayor an opportunity to protect the diverse communites within GM from a rising tide of xenophobia. The mayoral elections for GM are on 4 May 2017. This is the fourth of six questions asked of the candidates. Details of the other questions can be found at the end of this article.

“The world does feel pretty insecure right now. We’ve seen politicians on the extremes rise to prominence around the world. And closer to home, the country still hasn’t come back together following the divisive and disruptive debate at the EU referendum.

I don’t believe that people who voted Leave are in any way xenophobic or racist. The vast majority of people in Greater Manchester are welcoming, tolerant and generous people. We have always welcomed people from different cultures to live here, work here and make our city-region their home, and we should be proud of that.

If elected Mayor I will work to bring people back together, and develop policies based on hope, not hate.

I will commit to ensuring that representatives of all communities in Greater Manchester are involved in the work of the Combined Authority, and I will work to improve representation in our key pubic services, including our police. We also need to do much more to reduce the inequalities that still exist in some communities.

But above all, I will be a Mayor for everyone who lives in Greater Manchester. I won’t try to divide people, or set people against each other. It’s by working together that we can make our city-region an even greater place to live and work.”

“A fundamental part of the mayor’s role is the civic leadership of the city, to say what type of culture we want in GM. There are 2.7 million people live here and we are stronger because of our diverse communities. But they can’t just sit alongside each other, where everyone just sort of rubs along alright. They have to actually try and understand everyone’s different perspectives and respect them and be tolerant. I think we all need to be saying that we have our individual strengths but we are stronger together. If we want to be a place that is open, tolerant, respectful and has common values across our city then we need to be having someone who is prepared to try and promote that themselves.

I sent out a statement to Trafford after the referendum results that said ‘look, whatever you think this is not going to be what defines us. What will define us is our response to creating the type of society and culture we want to see’. These communities that I know have great assets and strengths; they had a view of the world where they wanted to leave the EU. They are perfectly entitled to that view. We need to understand what we can do to make a success of leaving the EU, and how do we make sure that people from GM feel that all parts of GM can benefit from its growth from the assets and strengths that we have so they are able to get good quality jobs, that the city is easier to get round on public transport, that you can live in homes that are decent.

You would want your kids and grandkids to get the education that they deserve. Forty five percent of our young people in GM leave secondary school without GCSEs that they are expected to get or are work ready. Why is it that if you are a young person growing up in Trafford, 96% of our young people go to good or outstanding schools, why can’t that be the case across the rest of GM? I think that the environment that we create goes to the heart of whether we create a tolerant and inclusive community.”

“With the rest of your questions [referring to this question on xenophobia and multiculturalism and two other questions] it wouldn’t be fair for me to tie the hands of my members and the public who are assisting me in drafting our manifesto. I’ll have comprehensive answers mid-March.”

“For Greater Manchester to succeed economically, we must be open to the rest of the world. I have already said many times that I will fight against this government’s aggressive Brexit agenda every stroke of the way. I still believe we should have remained and I will continue to fight for the closest possible relationship with the EU.

Companies will not invest in a city that’s closed and xenophobic, but will in a city that’s international and welcoming. The vast majority of people across Greater Manchester are just that. We judge people on who they are, not on the colour of their skin, their religion or the country they come from. There is a small minority of people who do not, and the Brexit vote has given some of those people a green light to be more vocal in their views. As Mayor, I will not for one second give in to those people. I will stand up for the decent, law-abiding, caring and compassionate majority and oppose hate and racism wherever it appears.”

This is the fourth in a series of six articles that record the GM mayoral candidates’ answers to questions put to them by The Meteor. The other five are on the subjects listed below, which will be hyperlinked when published: