‘Explore the past, change the future’ at the Working Class Movement Library 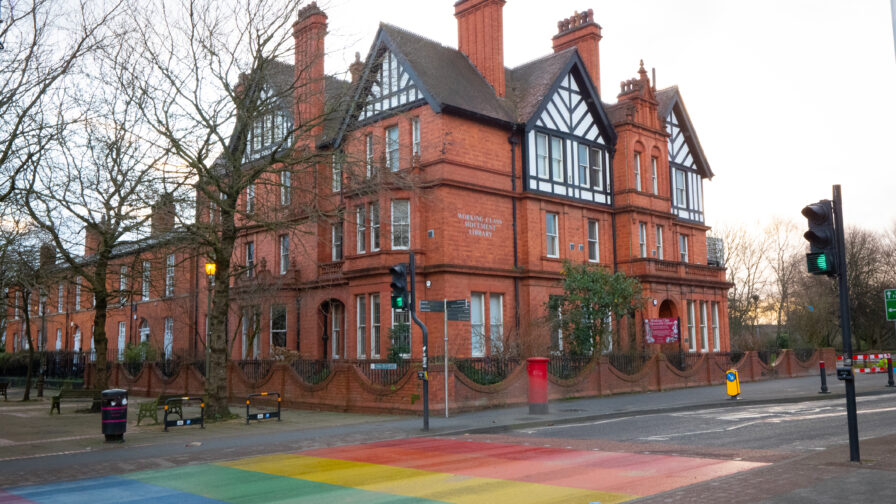 The Working Class Movement Library in Salford holds a unique record of Greater Manchester’s radical past that resonates with current social issues and the continuing fight for justice.

Anyone travelling out of Manchester through Salford, on the A6, may have their attention grabbed by the impressive red brick Peel Building which is home to Salford University’s school of Environmental and Life Sciences. They would be forgiven for overlooking the more modest building red brick building, across the divide of the throughway, even though both buildings were born from the same Victorian architect Henry Lord.

From the University side you cross the A6 on a rainbow walkway, to enter the Library via a side gate and a domestic style doorway. “Queen Jubilee Nurses Home” is embossed on the side of the building viewed when approaching from Manchester. The Wall of the building facing the road bears the name of the Library in unobtrusive lettering, which perhaps would have ruffled the feathers of the deceased architect Henry Lord who, in his day, was a staunch member of the South Salford Conservative Association.

Lynette Cawthra, the library manager explains, “The Library’s strength is its diversity.  I’ve come across no parallel institution anywhere else, in the UK or beyond. Thanks to the enthusiasm and political drive of our two remarkable founders, which subsequently drew in generous donations of extraordinary material, the WCML collection holds a remarkable range of books, pamphlets and objects relating to politics and campaigns, from Peterloo in 1819 and Chartism in the 1830s to the 1926 General Strike and more recent protests. The collection includes individual activists’ archives, as well as drama, literature, music, art and leisure”

One of those individual archives concerns Benny Rothman, a key figure in the Kinder Scout mass trespass, a key event leading to our right to roam areas of countryside previously forbidden, the 90th anniversary of which we’re about to celebrate on 24 April. The story of how this collection came about bears testimony to the devotion of a couple bound by an ideological conviction to help alleviate the injustice working people suffered, and their passion for collecting historical activist books. Eddie and Ruth Frow met at a Communist Party Summer school in 1953 and soon discovered their mutual passion for political and historical books as well as each other.

Following their marriage and the merging of their individual book collections they set up home in a three-bed semi in Kings Road, Old Trafford, Manchester. The subsequent decades saw the pair fastidiously seek out and acquire books, emblems, banners, ceramics, prints and other memorabilia all pertaining to the struggle of the working classes over the years.

Like an archival snowball the collection gathered a momentum of its own with word of mouth bringing donations of items, including entire collections, to arrive at their doorstep. By the 1970’s a charitable trust, the Working Class Movement Library, was formed and the collection continued to grow with Eddie and Ruth’s modest home packed ceiling high with historical documents and artifacts.

In 1987 a new building was required, to continue expansion and the entire collection (along with its founders Eddie and Ruth) was moved, thanks to the generosity of Salford City Council, to its current home at Jubilee House. Here this unique collection is housed growing and evolving to this day for both public and academic use with a small dedicated team, which included Ruth until her death in 2008. 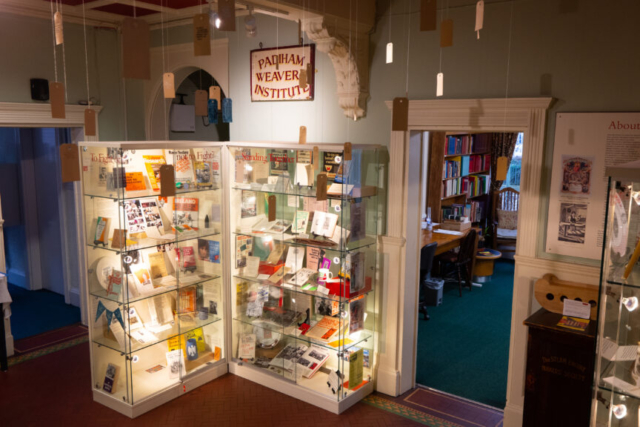 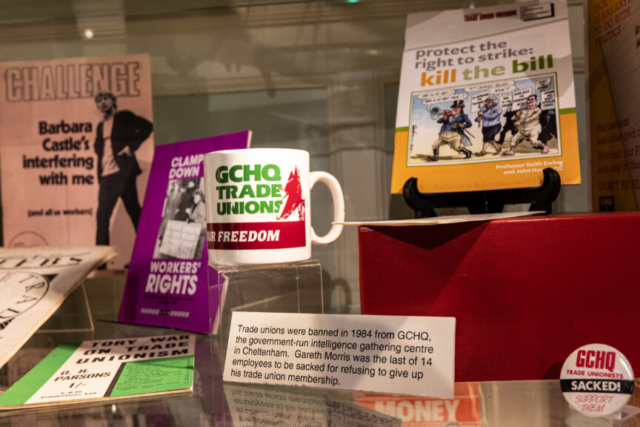 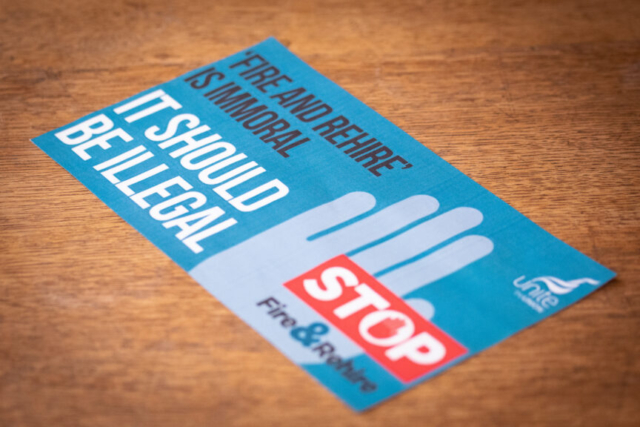 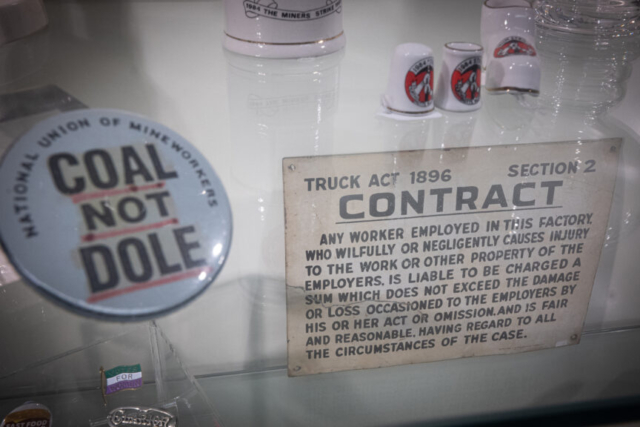 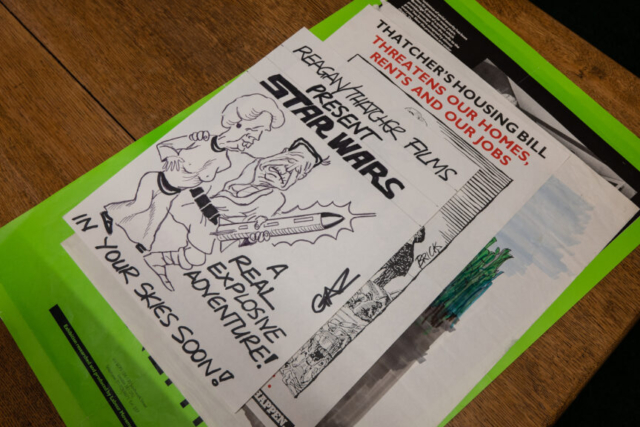 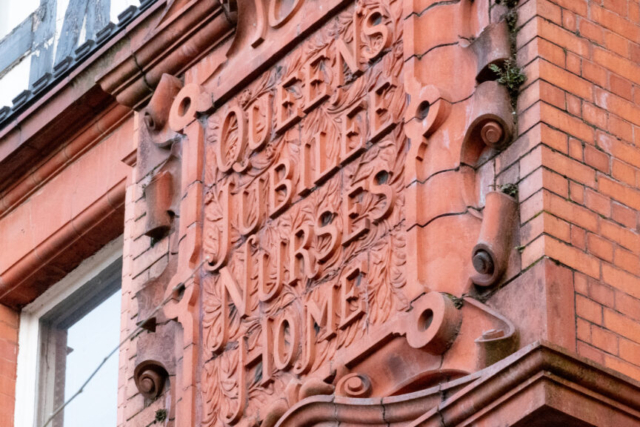 Once inside the library the ground floor, which is open for public access, is segmented from a central vestibule filled with glass housed display items which in turn leads to an additional ceramics room, a reading room and an exhibition and events room. The remainder of the house is an additional four floors (including the basement) which harbour the majority of the collection which can be retrieved by request for examining in the reading room. For this reason any visitors with a particular item or area of interest are advised to check the online library catalogue via the website to make requests prior to their visit. However, for the more casual visitor there is plenty on permanent show to occupy an hour or two of careful perusing.

Walls are adorned with campaign posters and heroes of the Labour movement, such as Tony Benn, with display cabinets full of items telling the stories of previous and ongoing struggles for workers rights and social justice. Unlike many such collections the cabinets do not conform to a progressive timeline but appear to be compiled in a thematic layout with the issues binding similar causes and items together. This makes the collection relevant to even the youngest viewer with artefacts which herald from the present day mixed with items dating back hundreds of years. Lynette says:

“It’s terrific to see people’s faces as they open an archive box of material in our reading room and discover the eclectic range of treasures inside – often ephemeral material like, say the 1930s anti-fascist campaign leaflets which quite simply exist nowhere else.

“The enthusiasm which our collections inspire in our readers often leads to major steps forward in academic research, but can equally translate into activist action. The words writ large on our front window say ‘Explore the past, change the future’ – and the great thing is that we’re open for everyone to come and do so, entirely free.”

“Some of our oldest items relate to Thomas Paine (1737-1809) who was a revolutionary writer and radical political thinker. He is honoured more in his adopted country the USA than in his native Britain.  Far ahead of his time, Paine wrote against slavery and poverty and in favour of Amerindian freedom.

“He also championed old age pensions, family allowances, maternity benefits and free education. His ideas were a source of inspiration across two continents 200 years ago and are still an inspiration today. Needless to say he was the great hero of the Library’s founders Eddie and Ruth”.

The collection is not restricted to dry political tomes, containing items such as badges from the Women’s Social and Political Union in the enamelled evocative green and purple hues of the cause, alongside campaign posters and the explanation of the emancipation struggle.

Lynette outlines the significance of the badge. “The suffragette badge reminds us of the importance of Manchester in the fight for women’s right to vote.  The Pankhursts are of course the most famous Manchester family associated with the suffragette campaign. Manchester was also an important focus for the suffragist movement. Unlike some suffragettes, who used militant and civil disobedience tactics, other suffragists such as Manchester’s Margaret Ashton were determined to use only non-violent, constitutional methods. In Manchester, suffragists backed campaigns as wide-ranging as school clinics, municipal health visitors, a Babies’ Hospital and trade union organisation for women workers”.

Political iconography, cartoons and posters will interest the viewing artists and those involved with graphics. “We are not teachers we offer pieces of history; it is up to the individual to decide what they make of them we do not attempt to steer them” says Lynette.

The collection however, does not allow the thoughts, comments and actions of previous eras to be easily forgotten. A simple mug bearing the quotation from William Hague (now Baron Hague of Richmond) that “The minimum wage is the height of irresponsibility” is an item, I think, he would wish not have been preserved for posterity.

One of the more unusual of the unique treasures in the library is a scrapbook, compiled as part of author Roy Whitfield’s detailed fact-finding, about Engels’s domestic and working life in Manchester and Salford. Lynette explains:

“The scrapbook contains copies of documents including census returns and marriage records which helped Whitfield track down addresses linked to Friedrich Engels. These are linked to Mary and Lydia Burns who acted as his guides through the 1840s Mancunian industrial slums and include maps and photos of the many different parts of the city. In some cases pictures of the actual houses where Engels lived are persevered.  However, sadly the vast majority of these buildings, like the Ermen & Engels factory itself, the Victoria Mill in Weaste, Salford, are no longer standing”.

The library is funded via a grant from Salford council and also affiliated trade unions as well as a “Friends of the Library” group. Everyone can join, either remotely or in person, the events and talks held at the library, which are mostly free. Lynette adds “People tell us we are unique. There is no other collection quite like this. In some ways that’s the odd thing we are known better worldwide than in Salford!”

For those of a more inquisitive nature the sheer breadth of the catalogue allows you to track back to historic landmarks and find them in today’s modern city scape. If locating the various whereabouts of working class events in greater Manchester such as the exact site of the Peterloo Massacre is your interest then the library is a rich source of knowledge. Items such as a preliminary scale model for the Manchester Martyrs memorial sculpture (never completed) are a stepping stone into a history and story ready to be told by the library’s collection.

Depending on your particular vintage the display will simultaneously evoke personal memory whilst enlightening you with the historical context. Women’s suffrage, the 1984 Miners strike, the Spanish Civil War, Black Lives Matter, the works of Thomas Paine, Fire and Rehire, the Manchester Martyrs, the Kinder Mass Trespass, Kill the Bill all are represented and doubtless are only the tip of the iceberg for those who want to delve deeper into the catalogue describing what occupies the other four floors. Lynette explains the “Cabinet displays are laid out to help connect the relevance of historical items to current working class issues”.

For anybody that questions the relevance, in our modern-day digital economy, of a Working Class Movement Library think of anytime that you, a friend or family member have felt aggrieved in the work place through discrimination or any kind or bullying, have been unfairly passed over, unrepresented, ill-treated or exposed to danger and injury. If those situations ring a bell with you, then maybe a visit is worthwhile to pay homage to those that have struggled before you and those that continue to seek a more just society for working people. Lynette, with a smile, said:

“When Tony Benn visited the library he gave us all a pep talk. He explained that ‘The State would not want the information, held in the library, to be preserved and because of that Lynette you are a very dangerous woman’ that’s going on my headstone.”

Visiting times and upcoming events can be viewed on the Working Class Movement Library website.

Featured image and all in article photos: Gary Roberts