Mayoral candidates for Greater Manchester on the housing crisis 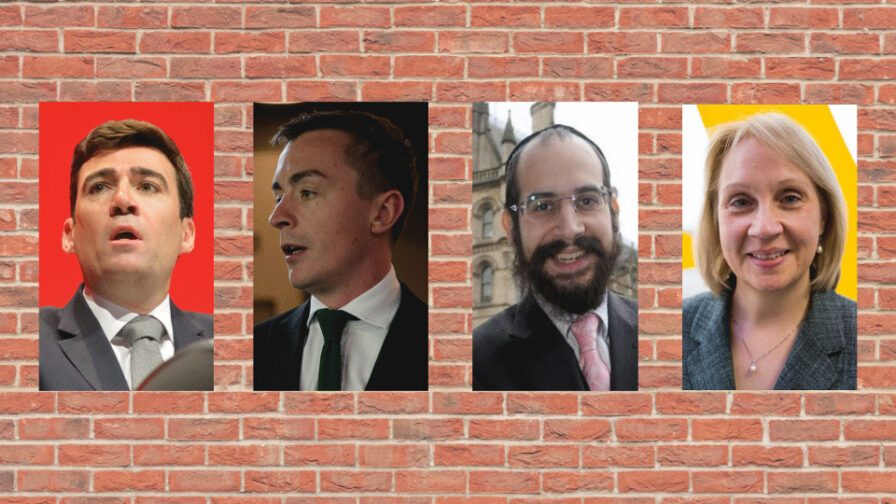 Housing is a basic human right. Yet for many across Greater Manchester (GM) that right is not being met. Increasing numbers of people are falling through the UK’s’ social security safety net and becoming homeless. Poor housing conditions and rocketing rents are rampant across the region, and there is a severe shortage of new homes being built. The Devo Manc devolution deal for Greater Manchester offers a chance for the elected GM mayor to address the housing crisis in the region. The mayoral elections for GM are on 4 May 2017.

“A secure place to call home is a basic human need but for thousands of people in Greater Manchester that is something they are having to live without.

If elected Mayor, housing will be a top priority for me.

We urgently need to start building more affordable homes, and we need a proper plan for where we build those homes that is sensitive to both the local environment and the needs of local communities.

I want to be able to use the Mayor’s Housing Fund [£300m revolving fund for housing across GM] to provide loans and guarantees to our councils and housing associations – enabling them to build the affordable homes we desperately need, including new rent-to-own schemes. And I want to do more to protect tenants against unscrupulous landlords.

Finally, we should set the ambition of eradicating rough sleeping in Greater Manchester by the end of the decade. I will work with our councils, voluntary organisations, faith groups and businesses to ensure no one is forced to spend a night on the streets. To support this, I have said I will donate 15% of my salary on an ongoing basis to kickstart a new Mayoral Fund to tackle homelessness and rough sleeping.”

There are a couple of ways we need to deal with that. One is the GM Spatial Framework [draft plan that allocates land to be used for housing and business use, currently includes green belt land] and I think I am the only candidate that is resolutely sticking behind the principles of that plan. We have got to plan for growth, new homes, new jobs, population growth and deal with the crisis that exists already for our existing communities.

You’ve had varying comments from the other candidates, that are all very nice warm words about much needed new homes, and how the needs are obviously paramount. All of them frankly are saying they would duck the decision that is needed. Because in order to build new homes you need to identify land to build them on.

The second one is you say, ‘well OK there are lots of funds available to support house building’. There is the £300m housing investment fund [HIF], which I think we need to look again at the terms that apply to that funding. It is designed to be a revolving fund [fund intended to be maintained by the repayment of past loans] so I don’t think it is ever going to be dishing out grants to build homes. But if you are a registered social landlord and you want to be able to build properties then the HIF certainly should be available for use.

One of the things I want to do with the HIF is treble its size. Because if you think about what it’s doing, since its inception in 2014 it has helped to enable 1500 new homes be started on sites that were previously stalled, so sites that had planning permission, but for various reasons they were not being implemented.

We also have the Homes and Communities Agency (HCA), the Department for Communities and Local Government (DCLG), local authorities as well have access to various funds that are available. Often, at the moment, these funds are for different purposes, so some of it is for: starter homes, affordable homes, bringing brownfield land [land previously used for industrial purposes] back into use, the private rented sector and for revolving funds. That needs to be cleared away so you get a housing pot for GM that is purely focussed on increasing supply.

We need homes for market sale, for the private rented sector, affordable homes, starter homes and homes for social rent. I am very relaxed about the principle that we have housing that exists across GM that meets the needs of our diverse population. I find it bonkers that people say that you would have one type of housing for a diverse population.

We need to think about how are we helping social landlords, such as Bolton at Home and Trafford Housing Trust, to increase supplies of their homes for people that need the type of homes being built, but also how we encourage them to have a diversity of housing. I sit on the board of Trafford Housing Trust and the National Housing Federation.

The GM Spatial Framwork has become a political football and a race to populism in order to get votes. I will not be the candidate that puts our housing crisis behind trying to win votes, that is not acceptable.”

“Transparency in public services is my top priority. We need a new spatial framework which has democratic accountability, is driven by residents needs, rather than large house builders profitability, and it needs to consult widely, beyond the usual suspects.

We need authoritative numbers, including just how much brownfield land is available, what return we are getting for public money we have pumped into private sector housing and take into consideration how our plans will change if – as expected – immigration drops post Brexit.

We need a transparency revolution in the housing association sector. Too many are failing their tenants and are effectively unaccountable, which has led to banker style wages for a very few at the top, irrespective of performance.”

“Housing in Greater Manchester is already under pressure, and it can only get worse as we’re ripped out of the EU. If our economy grows as we hope, more people will come from elsewhere in the country for jobs, putting more pressure on housing.

I want to see local authorities building more homes. Rather than rely on big companies that want to make big profits and always find an excuse as to why they can’t include affordable housing, the councils across GM – either individually or jointly – should be looking to set up their own house-building companies and get to work. Central government needs to play its part too – we need it to be easier to get these companies working and to build on brownfield sites in our existing towns and cities.

The rise in homelessness is a moral outrage and all too often we’ve seen councils trying to move the problem on or pretend it doesn’t exist rather than fixing it. As we build more homes – and build the homes that we need rather than the ones the developers want to give us – we can provide what we need to solve this problem. It takes different agencies and charities to work together, but we can do it – no one should be sleeping rough on our streets in 2017.”

This is the first in a series of six articles that record GM mayoral candidates’ answers to questions put to them by The Meteor. Five more will be published over the next week covering:

The answers of the mayoral candidates are presented in the order of the number of votes gained across GM, by their repsective parties, in the 2015 general election: Labour Party – 425,237, Conservative Party – 228,295, Ukip – 134,384 and the Liberal Democrats – 52,053. The sudden and untimely death of Deyika Nzeribe, the Green Party candidate for mayor, is the reason for the Green Party not being included in these articles. The same questions have been presented to the new Green Party candidate for mayor and will be published separately.