Eat out without selling out, at BOXCO 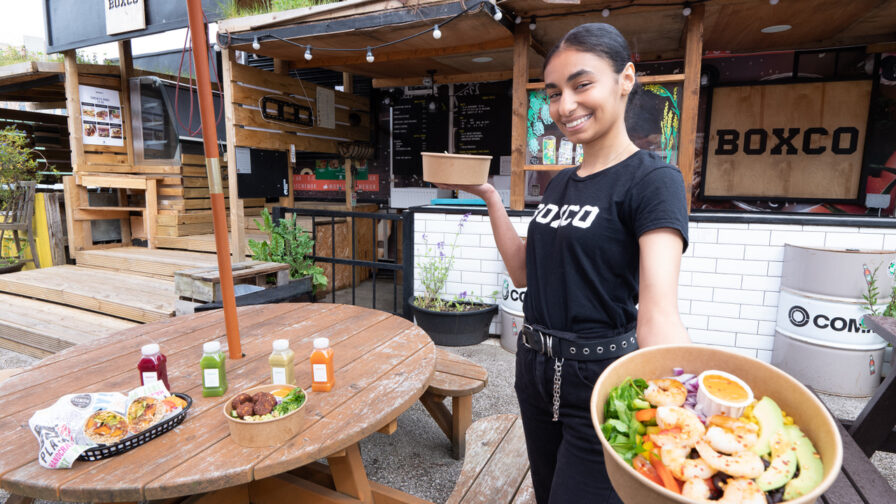 Gary Roberts reports on the rise of restaurants with a focus on sustainability in Manchester, and eats out at BOXCO which aims to provide ‘very tasty food that promotes health & wellness at an affordable price.’

Every week sees new restaurants opening in Manchester with the last three months of 2021 alone seeing an additional 2.5% increase in new venues, being added to the over 650 eateries already situated in the city. Often these “new” outlets are just London based companies venturing north to expand their national chains rather than local independent start ups.

Along with the fanfare of these openings, media restaurant reviews too often focus on novelty dishes, the swankiness of the interior decor and the celebrity clientele or patronage. If a new eatery boasts skyline dining, with gold leaf adorned dishes and a sprinkling of reality TV celeb visitors it’s certain to gain copy space both in print and online.

The promise of a Michelin star will also attract the media spotlight, with an associated menu which too frequently can only really be afforded by the most well-heeled Mancunians.

People are becoming increasingly sceptical of the hype that comes with new food venues and are asking more searching questions, before they venture out for a meal. A recent survey, by the Food Standards Agency, showed that 73% of people  surveyed said it was important for them to buy food that has a low environmental impact.

Despite this sustainability, social responsibility, carbon footprint, food miles and food origins are infrequently marked on menus or even discussed between diners and their hosts. The government’s recently introduced calorie count on menus, introduced in April, may help reduce expanding waistlines but does little to help an increasingly threatened planet.

Coupled with the growing cost of living crisis, potential patrons may require different criteria, from which to make a judgement, beyond Instagrammable dishes proffered by high cost establishments. Many Mancunians are currently economically excluded from entering many of the city’s venues and are seeking out alternative more affordable venues.

Greater Manchester has a long history of challenging conventional food consumption, hosting the Vegetarian Society’s first AGM in 1848, following Salfordian William Cowherd advocating a meat free diet in the early 1800’s. From the Diggers movement of the 17th century to the Kindling Trust’s pioneering farming techniques the city has continued its history of support for reducing the environmental impact of food production and promoting food access.

As Sacha Lord, the night time economy adviser for Greater Manchester points out.

“It’s no longer the case that sustainability is a marginal topic, and we must all play a part in helping the city-region on its journey to becoming net zero”.

Information on sustainability, from Manchester’s eateries, via menus, websites and reviews may aid customers to identify venues that promote good environmental practice. Together with the utilisation of local producers, helping reduce food miles, this will also support the local economy. Sacha explains:

“Customers are scrutinising operators more than ever in terms of their environmental practices, and rightly so. Through various initiatives, including GM Green City, we are providing guidance to venues on how they set positive sustainability policies, whether this is through ensuring less waste goes into landfill, increasing recycling of waste products, or refitting premises to reduce carbon footprint for example”.

“We source the tea for our brew from the local Cheshire tea company and we only use fresh cold-pressed juice that we produce at our Manchester site. Our clients are mostly independent small Manchester based venues and they are increasing asking us about where our ingredients originate from.

“We put sustainability at the centre of what we do. For local deliveries we drop off in returnable crates to reduce packaging. We also donate our used tea leaves and SCOBY’s to Platt Fields market Garden for them to compost. To save packaging at our brewery, we offer a refill service where you can bring your own bottle to fill with kombucha straight from the tap”.

GM Green City is taking action with its “Five Year Environment Plan” setting out the long-term environmental vision for the city to be carbon neutral by 2038. The plan lays out the urgent actions needed to be taken in the next four years to help achieve this goal including working with Manchester’s food service businesses. Sacha Lord says:

“If we are expecting businesses across Greater Manchester to be at the forefront of sustainability, it is key that we help them to do so as much as possible.”

The Meteor visited BOXCO, a Mancunian eatery which is striving to embrace environmental considerations in its outlets in Old Trafford and Hulme, in order to provide good, wholesome food to its customers alongside boosting the sustainable credentials of the eatery.

BOXCO began its life in Manchester three years ago. Founder, Chris Heteckery, explained the ethos of the organisation.

“We chose Manchester in particular due to the opportunities available to establish a business that at its core is about giving our customers choice focusing predominantly on very tasty food that promotes health & wellness at an affordable price”.

“Our location in Hulme has a diverse demographic, including a big student community who need and now demand better healthier options, especially plant based meals. We offer healthy, tasty, and low calorie food dishes. Cooked fresh daily on demand, we have Italian, Mexican and Asian ingredients that add variety and custom taste to our food”.

The Old Trafford site, nestled at the side of the of Empress business centre, even has a recycled construction with a combination of al fresco dining and covered booths partly constructed from recycled pallets. The covered area also supports a green roof which allows for home grown herbs, a feature shared with the Hulme venue, which are used in the freshly made dishes. It has the character of a beach bar with local Manchester brewery Shindigger beer on tap and a range of organic wines and soft drinks.

Chris explains how he stays local with his suppliers helping to reduce food miles and supporting local businesses.

“Our aim is to offer as much plant-based food on the plate but we also offer seafood and meat dishes. Protein comes in many forms, we give choice and taste for all. Most of our packaging is compostable and where possible we seek local sustainable options for all the food services we provide.

“We use Manchester based firms Brownie Owl and Black Cat Cakery for our cakes with our plant based ice cream coming from Fredricks in Chorley. We also produce our own Alkaline ‘Kangen’ water and have organic juices from the Organic Pantry based in Tadcaster both all of which are sold in recyclable bottles.”

BOXCO also reduces any waste by working with a company called “Too Good To Go” that helps sell food, that would otherwise go into the bin, offering a take away option for those on a tight budget.

On the Meteor’s visit we were served two plant-based dishes, a falafel bowl and a loaded jerk bean burrito by the restaurant manager, Fatima, who has been with the company since day one. Both dishes had enough spice to highlight the flavours but were not too fiery to blot out the taste of the crisp salad accompaniments. The meal was a triumph of plant-based cuisine, with hearty portions.

If you wish to sample the food offered by BOXCO visit their sites at 42 Hulme High Street in Manchester or The Empress Business centre 380 Chester Road in Old Trafford.