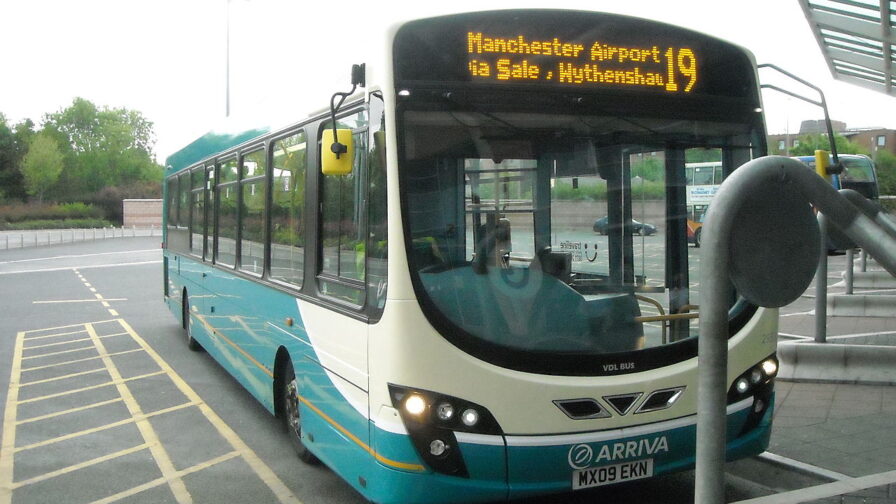 Arriva bus drivers in Greater Manchester are set to go on an all out continuous strike from 30 October, following a vote by Arriva North West drivers with 87% in favour of strike action.

Arriva bus drivers in Greater Manchester have voted overwhelmingly to go on strike, as talks between the bus operator and trade union officials collapsed.

Just under 2,000 bus drivers across Liverpool, Greater Manchester and the north-west of England were eligible to vote last week, with the majority voting for industrial action which is likely to begin this weekend. Of 1,845 drivers in total, 1,220 drivers (87.1%) voted in favour and 181 (12.9%) against, on a 76% turnout.

One hundred and ninety of the drivers operate out of Arriva’s Bolton and Wythenshawe depots. The strike is scheduled to begin on 30 October and it will be an all out continuous strike, meaning it will run for 12 weeks, at the end of which drivers must be re-balloted.

Unite, which represents the drivers and had been negotiating with Arriva North West, said the company was “responsible” for the likelihood of all-out strike action, due to its failure to offer a decent wage increase.

Unite general secretary Sharon Graham said: “The last thing our members want to do is cause disruption to the public, but they have been forced into this position by Arriva’s outright refusal to negotiate in good faith.

“They have the full backing of their union, Unite, in their fight for a pay rise that reflects their worth. Arriva still has time to avoid these strikes, which is why I am urging the company to table a much stronger offer.”

Pay negotiations between Unite and Arriva North West have been running since June. Like many frontline workers across the country, bus drivers in Greater Manchester have seen their wages squeezed by rising inflation.

Unite told The Meteor that Arriva offered drivers a 1.5% pay increase, and then upped their offer of 2% after the strike ballot. Unite will ballot members on the 2% offer this week, but told The Meteor it’s highly unlikely that members will accept it.

Due to the energy crisis and the pandemic inflation rose to 2.9% in September, meaning bus drivers’ wages would fall in real terms if they accepted a 2% pay rise. Although this higher rate of inflation could just be temporary, large price increases could last well into next year.

Greater Manchester’s bus drivers have also been subject to so-called “fire and rehire” practices, where bus companies terminate their employment contracts and re-employ them on worse terms to maximise profit.

An Arriva UK Bus spokesperson said last week: “It is very regrettable to hear that Unite members in Arriva’s depots across Merseyside and the North West have voted in favour of striking over rates of pay.

“While we understand concerns about recent increases to the cost of living, we believe the offer we put forward is fair and highly competitive.

“Arriva is very committed to continued dialogue and has already been involved in extensive discussions with our trade union partners. We had very much hoped to reach an agreement.

“Public transport remains under enormous pressure following the effects of the pandemic and it’s vital that we work together to build a recovery, while also providing continuity of services for local communities.”

Matthew Topham, a campaigner at Better Buses Greater Manchester, says the dispute exposes major problems with privatised bus travel in the city region. “The decision by Arriva North West to deny our hard-working bus drivers a decent pay rise after the stress of the last year is shameful. When private companies prioritise profit over decent pay, it understandably forces many drivers to quit.

“In this way, the costs of shareholder payouts are pushed onto passengers as operators respond to driver shortages by running fewer services on time and cutting the network.