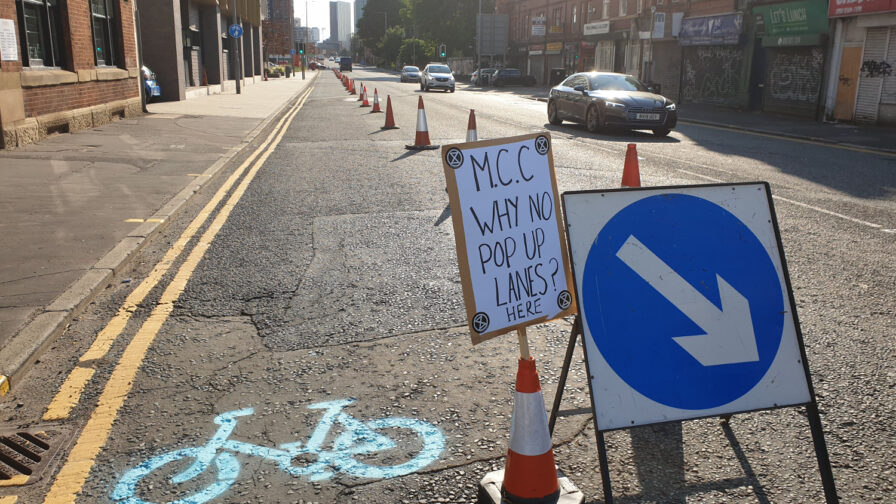 Three weeks ago, Manchester City Council promised to “work with” neighbouring councils on pop-up cycle lanes. The lack of follow-through has prompted Extinction Rebellion and A6 Cycle Action to stage protests this week for pop-up lanes to deliver a green and socially just post-lockdown recovery.

Protests to highlight Manchester City Council’s inaction on creating pop-up cycle lanes have begun. This morning Extinction Rebellion Manchester erected a pop-up lane with signage and cones on the A56 Chester Rd. It bridges the 300m gap between the Trafford border, where the neighbouring council’s pop-up lane from Sale ends, and Deansgate. This Saturday, a safe, socially distanced cycle protest is planned on the A6 to demand a pop-up lane there and across Manchester.

The protests come nearly three weeks after Manchester City Council (MCC) created uproar when it announced it would not be creating pop-up lanes, leaving a big hole in plans for a Greater Manchester network. The ensuing backlash from MP’s, councillors, and the public led MCC to announce they had bid for £600k for walking and cycling interventions as part of a region-wide bid, and to clarify they would “work with” neighbouring local authorities who created pop-up lanes to ensure the safety of all road users. Since then, however, no action has been taken by the Council. Most notably, Trafford’s pop-up lane that has been in place for weeks still came to an abrupt end at the Manchester border.

That changed this morning when Extinction Rebellion (XR) took matters into their own hands. Using cones and signage, the high profile environmental group created a safe pop-up lane in the style of Trafford’s lane. A spokesperson for the group says:

“I am appalled at Manchester City Council’s inaction.  This is a public health, social justice and an environmental issue. Approximately a third of [Greater] Manchester [households] do not own a car and, especially those from the East side of the city near the A6 corridor, have a no-win choice to make. Either they end up on overcrowded and unsafe public transport, or they take their lives in their hands and cycle on streets packed with cars with no dedicated cycle lanes.”

Due to social distancing, public transport will be running at 10% capacity. To accommodate the need for alternative transport options, the government has issued statutory guidance and made emergency funds available for temporary walking and cycling measures. XR say failing to create pop-up lanes is potentially illegal because it fails to heed Statutory Guidance to prioritise cycling infrastructure. MCC’s initial rejection of pop-up lanes led Lord Berkeley to raise the issue in the House of Lords, saying Greater Manchester’s plan “has one big hole in the middle because Manchester City Council won’t cooperate.”

XR believe cycle lanes are necessary to support a green post-lockdown recovery and address the on-going pandemic. Air pollution levels in many parts of the city and GM region pre-lockdown were illegal, and the group point to numerous studies linking high air pollution levels to Covid-19 vulnerability.

They say cycling is also crucial to reducing carbon emissions by getting people out of cars and onto bikes. Less driving will also save money spent on fuel that can be spent in the local economy. A spokesperson for the group said:

“The Covid19 crisis has created a unique opportunity to create the kind of safer, cleaner streets we all want to see in Manchester, and to reduce carbon emissions too. Reducing our carbon emissions won’t just benefit the planet, and make us all healthier, it will also save us money. Instead Manchester City Council is being hypocritical and not taking the situation seriously, and as a result is failing to protect its citizens.”

Following today’s action, a protest will take place this Saturday starting at 12pm along the A6. Starting at the Antiques Village in Levenshulme, protesters will make what is described as a “safe, socially distanced chain of people and bikes”. The protest is organised by residents and representatives of environmental groups across Manchester under the banner of A6 Cycle Action.

Residents who organised the protest also call MCC’s inaction a social justice issue, saying communities along the A6 are less likely to own a car and also include a significant BAME population, who are more at-risk of becoming sick from Covid-19.

A spokesperson for the group says:

“There can be no doubt whatsoever that this is a social justice issue. Communities who have already suffered disproportionately at the hands of Covid-19 are now having this injustice further compounded by the inaction of a council who are supposed to have their best interests at heart. We call on Manchester City Council to urgently review this decision – we will continue to make our feelings known until they do.”

A representative from the friends of Levenshulme Station added:

“We are sadly aware that trains, the sustainable transport choice for many living in South Manchester, will be off the menu for the foreseeable future. We strongly support action to ensure that Levenshulme’s commuters are able to access safe alternatives that do not contribute to the air pollution on our roads.”

The protest is also supported by Advocates of the Levenshulme Bee Network, a community partner group working on an initiative to create the first low traffic neighbourhood in Manchester. A spokesperson says:

“Advocates of the Levenshulme Bee Network supports the community led action of residents to reclaim space for people on bike and foot on the A6 and will be championing their efforts on Saturday.”