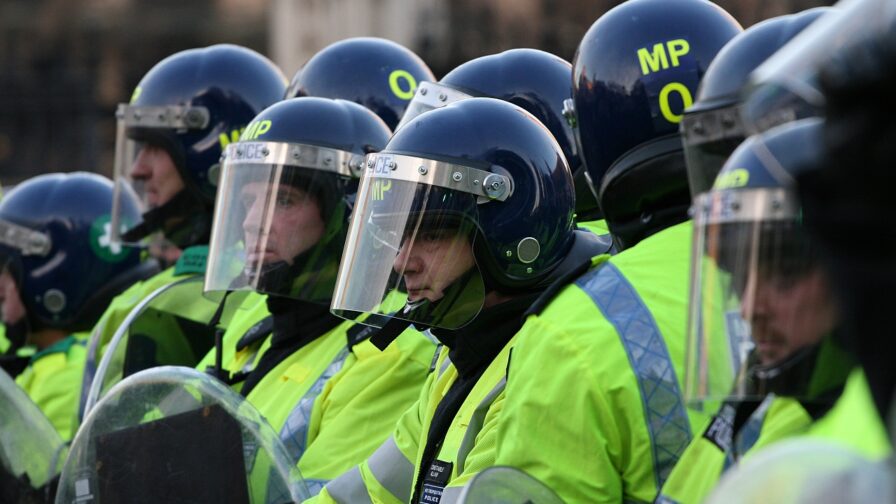 Policing of the pandemic "maintains racial injustice, further entrenches existing structural inequalities, and poses a threat to the safety and wellbeing of racially minoritised and working-class communities," the authors say.

New powers granted to the police during Covid-19 have worsened the over-policing of ethnic minority groups, a new report by academics at the University of Manchester says.

The report, published this week by the Institute of Race Relations (IRR) and authored by academics at the Centre on the Dynamics of Ethnicity (CoDE) based at the University of Manchester, contends that the pandemic “provides an easy entry point to pursue longer-standing forms of racialised policing, or indeed an easy alternative justification for a police stop when more traditional methods fail to yield results.”

New police powers granted during the pandemic “overlapped with existing policing patterns, structural conditions, and racial stereotypes which draw on myths of Black criminality,” the report authors argue, serving to “further exacerbate and enable the policing of ‘the everyday’ for racially minoritised communities.”

Drawing on studies of institutional racism in police forces across England as well as personal testimonies of those impacted in places like Greater Manchester, the report’s authors warn of the dangers of increased police power throughout British society.

The academics highlight that, while crime rates fell during the first lockdown, the use of stop and search in May 2020 was double that of the previous year, while the Use of Force by police rose by 12.5% between April and June 2020. Both these practices disproportionately target minority communities and other marginalised groups, the authors say.

“The Covid-19 pandemic ushered in a period of extraordinary police powers which arrived in a broader context of racist over-policing and police violence,” said the report’s lead author Dr Scarlet Harris in a statement. “This report draws on extensive conversations with people from racially minoritised groups and communities living across England over the course of the pandemic.

“The findings dismantle the myth that the police contribute to public safety. Instead, they demonstrate how policing such a ‘crisis’ has reproduced profound harms for those from racially minoritised groups and communities.”

One woman interviewed for the report claimed that the pandemic had effectively given the police a ‘golden ticket’ to ‘ridicule’ black communities, as ‘bored’ officers were given increased powers but fewer crimes to stop. Another woman recalled how a relative had been arrested for simply delivering food to an elderly relative; the police present at the incident were physically violent towards her and her son, while others at the scene were arrested and pepper sprayed.

Several officers cited coronavirus regulations “imprecisely and inconsistently” to apprehend members of the public, the report says. In one instance, a young man was violently arrested for possession of cannabis while visiting the grave of a deceased friend in a local cemetery. The social worker who arrived at the scene was then questioned on breaching Covid-19 regulations, despite him being a key worker and therefore allowed to leave his home to work. He was then arrested for a road traffic offence, for which the police had no evidence, and questioned about breaching Covid-19 regulations and threatened with a fine.

There are documented procedures for how the police should act in the event of a breach of COVID-19 regulations, the social worker said. “They can’t just jump to enforce, they had to encounter, they had to encourage you to go home… and then they enforce. But with us, they just skipped all those stages, and went straight to enforce.”

There are also repeated account of police officers failing to wear Personal Protective Equipment (PPE) and observe social distancing in the report. One pregnant woman was stopped by the police twice, and in both instances had to repeatedly ask the officers to observe social distancing. In such situations, the already traumatic experience of an encounter with the police is ‘particularly exacerbated by the risk of infection/contamination.’

“This research gives a voice to those who have had uncivil, discriminatory or brutal encounters with the police and points to the dangers that the public health model poses for ‘policing by consent’,” IRR Director Liz Fekete said in a statement.

Overall, while acknowledging that ill treatment of these communities is nothing new, the authors of the report conclude that the “policing of the pandemic… maintains racial injustice, further entrenches existing structural inequalities, and poses a threat to the safety and wellbeing of racially minoritised and working-class communities.”

The report comes in the wake of renewed focus on police brutality, raising further questions about the racial abuse of law enforcement agencies. Last year saw a wave of Black Lives Matter protests around the world due to the murder of George Floyd by white police officer Derek Chauvin in the United States. The Police, Crime, Sentencing and Courts Bill–labelled by the report’s authors as ‘an unwieldy and draconian bill’ and currently being scrutinised in the House of Lords–sparked a wave of demonstrations earlier this year on the basis that it would give the police increased powers to curb large scale protests.

There’s also been increased focus on the use of police powers locally. In July, The Meteor reported that Manchester city council scrapped school based police officers in light of growing pressure from campaigners and teaching unions.

Greater Manchester Police (GMP) accepted the findings of the 2021 Achieving Race Equality Report, which examined policing in the city region, that people of colour were more likely to be stopped and searched. But GMP Chief Constable Stephen Watson has insisted that the police force was not institutionally racist. Stop and search and tasers remain as “effective tools in our efforts to keep communities safe”, he argued in July, adding that “we have much more to do with partners across Greater Manchester to understand the root causes of inequalities.”

When asked for comment on the report, GMP referred The Meteor to the National Police Chiefs’ Council. In a statement the NPCC said: “We acknowledge the serious concerns raised around disproportionality and racial disparities and we will carefully consider the report’s findings. We are committed to building a fairer, more inclusive police service, by listening to and learning from people’s experiences.”

“This report contains complex analysis that needs to be interpreted carefully. The data available makes drawing definitive conclusions about disproportionality challenging and comparisons between forces are difficult due to their varying local contexts.”