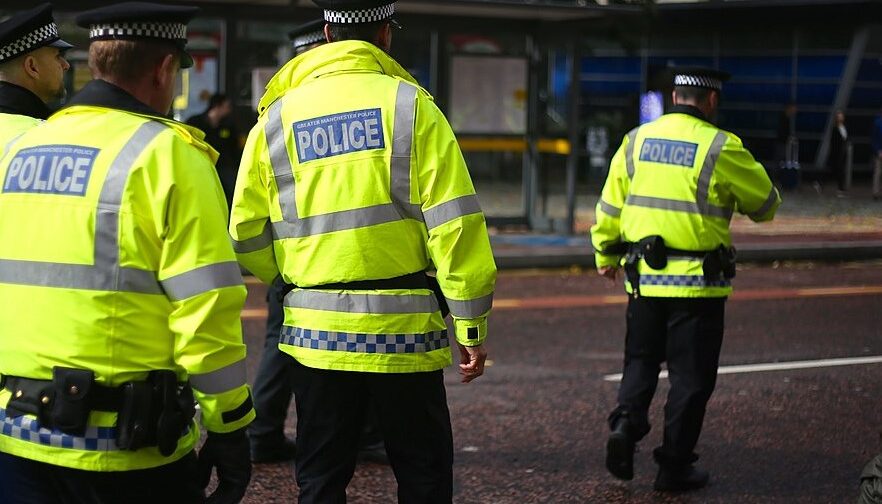 While anti-racism campaigners welcomed the move as “an important step”, they warn it “does not go anywhere near far enough” to remove police influence in Manchester’s schools.

Manchester city council has decided to pull police officers out of schools in the city, following a campaign to “decriminalise the classroom” which brought public attention to the issue.

An email sent by Manchester city council lead for Children and Services, councillor Gary Bridges, to all city councillors informed them the council would withdraw all existing school-based police officers (SBPOs).

In the email, sent on Friday 9 June and seen by The Meteor, cllr Bridges said police officers would be “linked to areas in the city rather than individual schools.” Cllr Bridges wrote:

“I understand that there are positives to closer working with Police, both to keep young people safe from being a victim of crime but also to identify early signs that a young person may go on to commit an offence and work with them to prevent it.

“However, I too have concerns about a model of Police officers being based in schools and about the potential problems if their role is not clearly defined and understood.”

The councillor said that he had raised the concerns with Greater Manchester Police, “which led to a conversation about a different model for the city.”

The model agreed upon will see police officers “linked to areas in the city rather than individual schools” as well as the “multi-agency Early Help Hubs” cllr Bridges said in the email. Manchester will be the first local authority in the country to deploy this model, teacher trade union sources said.

The climbdown comes after growing pressure from campaigners and teaching unions on local leaders to remove police from schools and is a rare instance of a councillor in the city region publicly opposing expanding police presence in schools.

Last year, The Meteor reported that several Greater Manchester branches of the National Education Union (NEU) passed motions calling on local authorities to “decriminalise the classroom” and endorse the community-led campaign No Police in Schools being led by Kids of Colour.

Kids of Colour produced a report, “Decriminalise the Classroom: A Community Response to Police in Greater Manchester’s schools”, in which they collected survey data from 554 students, teachers, parents and community members regarding SBPOs. A common theme that they saw in this data was the over-policing and the labelling of students from marginalised groups.

Responding to an opinion piece by Kids of Colour campaigner Mea Aitken in Manchester Confidential in April, Andy Burnham said he was “aware” of concerns but doubled down on stationing more police officers in schools, and went on to say:

“The truth of the matter is, it’s not a new policy. This is a long-standing Greater Manchester Police policy.

“I was a supporter of it because it wasn’t about enforcement, it was more about building a relationship between the officer and young people in school, and I think that sometimes it’s been misunderstood within the context of this policy.”

Billboards went up across the city region and a petition reached more than 1,700 signatures in opposition to the plans. In March, The Guardian revealed that more than 650 police officers were working in schools in the UK. The day after cllr Bridges sent the email Campaign group Kids of Colour issued a statement:

“While we take a moment to celebrate the movement we are building together, the fight is not over and we will not be complacent. Undoubtedly, racialised and working-class communities will continue to be the focus of this policing, and will continue to suffer the consequences.

“Of particular concern is that these roles will be tied to multi-agency early help hubs for multi-agency input to any problems that are picked up. This, an existing part of the role of SBPOs and police-school partnerships anyway, is not good news.

“We have seen the impact of police in multi-agency settings. SBPOs threatening students by saying that they will ‘get the housing in’ on their families if they continue to misbehave; community-based officers introducing racist narratives about ‘gang’ affiliations in social work meetings without evidence; and officers using domestic violence to construct racialised families as ‘unfit’, as opposed to ‘in need’.

“As Greater Manchester Police build a ‘youth watchlist’, these officers will no doubt be key to this discriminatory tool. Like all policing, these roles will still harm our young people, and remain fundamentally incapable of addressing the root causes of problems affecting our communities.

“In our report ‘Decriminalise the Classroom’, which surveyed 554 people from across Greater Manchester, we asked community members how they would like funding to be spent when it comes to education. The answer was youth workers, counsellors and more teachers.

“Despite making this clear in our campaigning, Manchester city council is still committing to policing as a solution. Policing is never a solution, and we will not stop until we see an end to the policing of our young people and meaningful investment put into keeping our communities safe.”

The Meteor contacted Manchester council to comment on what evidence was used to come to this decision of removing officers from schools and instead linking them to broader areas. The council did not respond by the time of publication.

Campaigners welcomed the move but argued it did not go far enough. Dr Remi Joseph-Salisbury, presidential fellow in ethnicities and inequalities at the University of Manchester, told The Meteor:

“Given the increasingly well-documented dangers and harms associated with the presence of police in schools, and the profound issues surrounding Greater Manchester Police, the withdrawal of SBPOs from schools in Manchester is an important step that should be welcomed.

“However, we need to be clear that the new arrangement for Manchester schools is still heavily reliant on policing. The problem is not only school-based police officers, but the presence of police in schools more broadly. As our report on police in schools demonstrates, people in Greater Manchester want to see more positive investment in schools, more teachers and pastoral support, not more police. This new arrangement, therefore, does not go anywhere near far enough.

“Additionally, it remains unclear whether this move will affect all the boroughs of Greater Manchester. This is something that GMCA really needs to clarify urgently. We are also yet to hear adequate recognition of the problems with SBPOs from the mayor’s office, and this has been a long time coming, particularly given GMCA’s apparent – but yet to be seen – commitment to racial equality.”