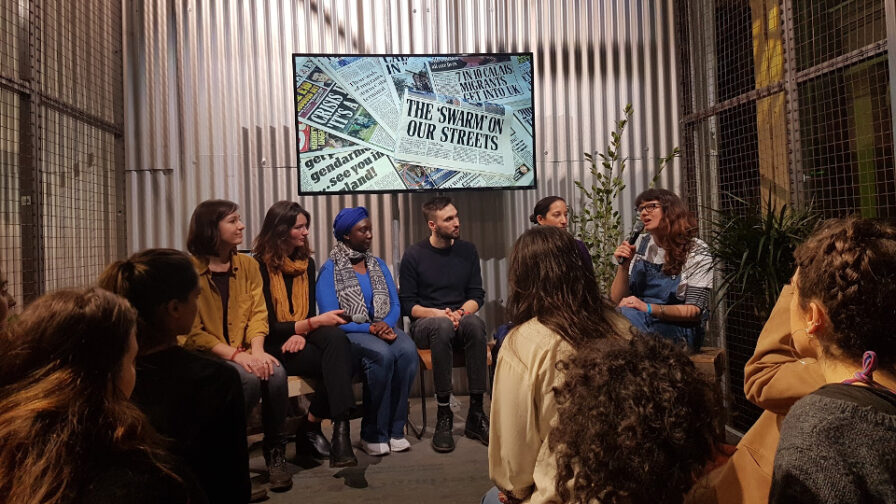 The ‘hostile environment’ for refugees and immigrants in the UK has seen state-sanctioned human rights abuses proliferate. The government has been aided and abetted in producing this toxic environment by the right wing media in the UK, who persistently demonise immigrants and stir up far-right outrage. With the number of refugees and asylum seekers likely to grow due to repressive governments, poverty, hunger, wars and the effects of global warming it is essential that we find a better way of portraying these people in the media. At the Lush Summit 2018, these issues were discussed by a panel of journalists, educators and campaigners: 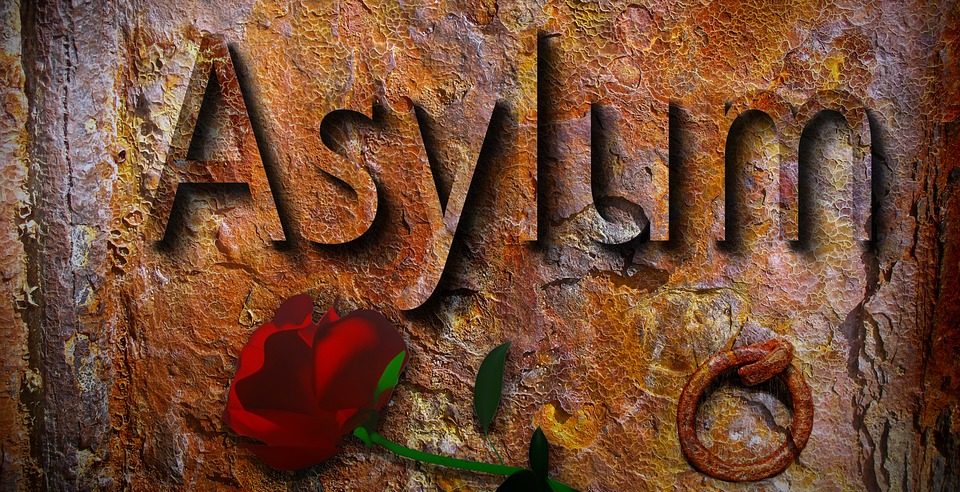 The language that has been used by the mainstream, often right wing media, to describe human beings in crisis is enough to make many of us shudder. When compared with other European countries in a study by Cardiff University, the British media was found to be the “most aggressive” in its coverage of migration.

But our media’s explicitly hostile treatment of migrants, including refugees and asylum seekers, is just the sharp end of a much wider problem of ill informed, incomplete and politically skewed coverage of the movement of people, with left leaning media outlets often pushing a more sympathetic but ultimately unhelpful narrative of a nebulous global crisis, leaving audiences feeling helpless and overwhelmed.

On the Migration Stage at the 2018 Lush Summit, a panel discussion explored this problem, drawing on the experiences of journalists, educators and campaigners in the portrayal of refugees and asylum seekers and its effect on public opinion.

Panel member Rachel Elgy works for a not-for-profit organisation called Equaliteach, which provides interactive training on issues of equality, diversity and inclusion for education settings. Through her work with young people she has seen “a real and genuine correlation” between what is in the press and the opinions of young people, as well as “black spots” of knowledge, around what different terms concerning migration actually mean. Rachel says:

“A young person who is very careful not to be offensive about Muslims will openly say things that are hugely offensive about immigrants because there isn’t that humanisation in the media – it’s all about ‘migrants’, and just one word is used to describe all these different kinds of groups.”

Broadcaster and journalist Bidisha works to humanise and individualise stories of refuge and asylum, explaining how our current coverage of these issues lacks a sense of nuance:

“I date the sociopolitical world we live in now to 9/11….Since then all kinds of different things have become conflated together into one thing. You had the war on terror… You had a series of failed or attempted peoples’ revolutions in the Middle East and North Africa region, which had varying degrees of success and varying results. You have massive refugee flow for all different kinds of reasons, not just Syria, not just Iran, not just places like that. Also internal migration due to climate change, due to failed states of countries that had wars three or four years ago. Somehow all of that has got bundled up together.” 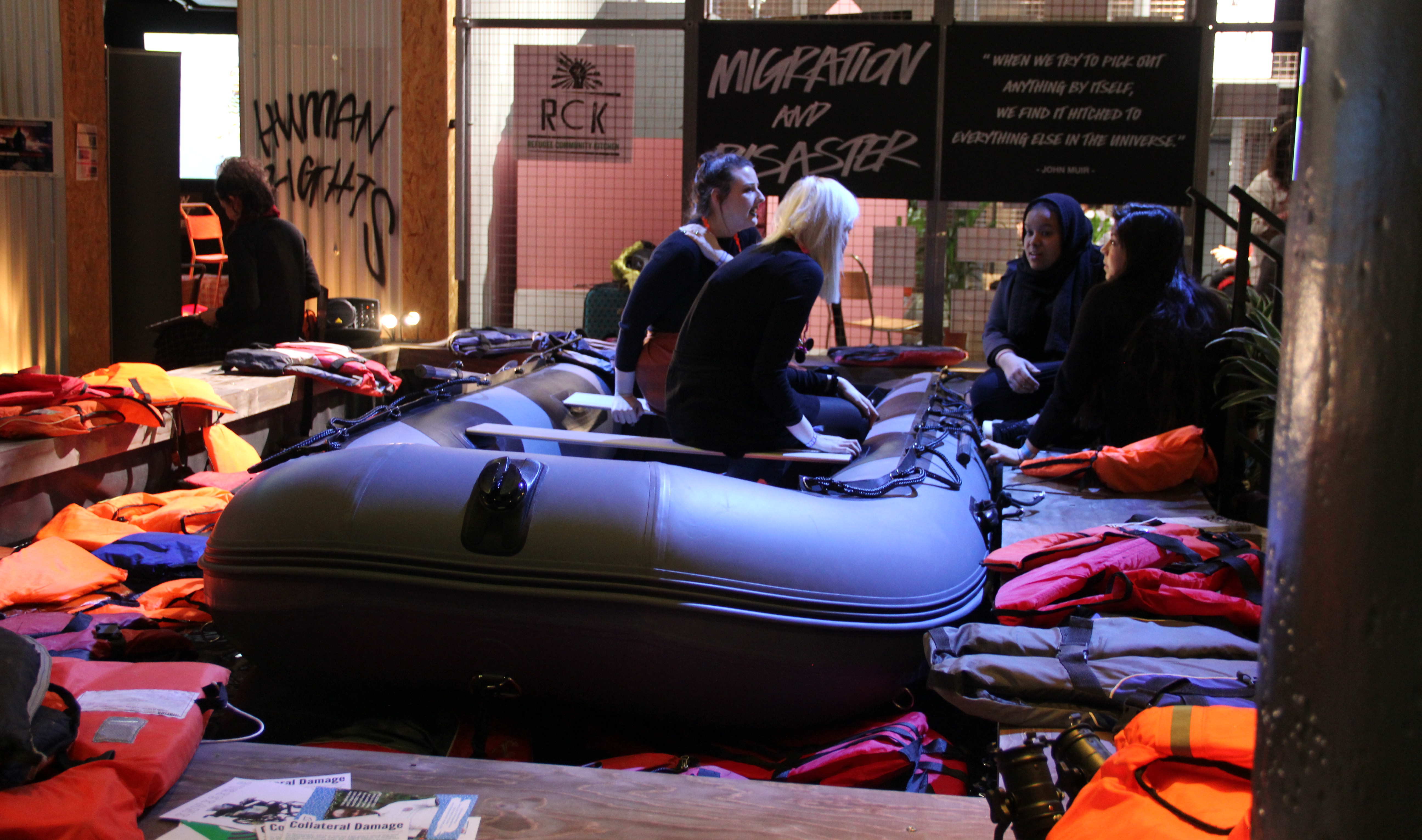 Tom Godwin, who works for the anti-racism organisation Hope Not Hate, has been listening to communities across the UK as part of The National Conversation on Immigration, aiming to uncover what the British public thinks about immigration. Their research found that while people were “aching for real information”, trust in the tabloid press is low, and there aren’t many other places to go for information, which leaves communities perpetuating the narrative of sources they themselves mistrust. Tom went on to say:

“People would regularly say ‘we don’t trust the media, we don’t trust what we read’. But they would then replicate the same stereotypes that come out of the media – they would say things like ‘scrounging asylum seekers’, they would talk about the ‘floods[of people]’. They would repeat the same language.”

So what are the alternatives?

One suggestion for tackling the damaging or incomplete narratives of the mainstream press was put forward by Sam Hudson and Elizabeth (not her real name) from Women For Refugee Women. This grassroots organisation works with the arts & media and holds public events helping female refugees tell their own stories:

“The media is not the only way for us to listen to people’s stories.” said Sam. “We can be engaging more directly, we can be going to these spaces where women are performing and sharing their own stories in a way that they want to. That’s a lot more powerful – you’re going to get a lot more nuance, you’re going to see the human face behind these numbers that make it sound like an overwhelming problem.”

Then there are journalists who, despite being turned away by mainstream media, have decided to go it alone to tell individuals’ stories locally. Like panel member Sue Clayton, director of ‘Hamedullah: The Road Home’, which documents a child refugee’s journey of being deported from his home in Kent, back to Afghanistan, where he had fled from as a child. Sue explained that this individual story had mobilised the local community of Kent, who were predominantly UKIP supporters, to rally around Hamedullah, and eventually challenge their assumptions about refugees and the immigration system. 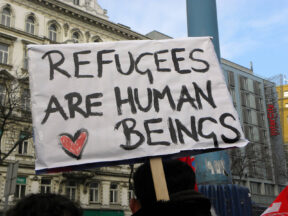 Tom from Hope Not Hate cited this as a positive story that came through in their work on the National Conversation on Immigration, and suggested that it was indicative of the different relationship communities have with local stories rather than national ones:

“One thing that came out that was interesting was the difference between local media and national media. Local media had a very positive effect….A lot of people mentioned local stories, so it’s quite heartening to know that those local stories can cut through the national stuff, which can be quite overwhelming.”

The commissioning editor at ITV refused to buy Sue’s latest film, ‘Calais Children: A Case To Answer’, because it is too critical of the government, so it was crowdfunded online instead. She takes hope in the power of the internet and social media, saying “who under 30 even watches TV now anyway?”

Though the term ‘fake news’ is most commonly associated with the rise of social media and digital technology, misinformation and bias in the media is anything but new, particularly when it comes to the stories we hear about the most vulnerable groups in society. The changing nature of the media landscape is opening up more and more opportunities for people to challenge dominant narratives put forward by traditional media and connect with each other at global and local levels over issues of migration, though vested interests will always seek to influence the debate.

The discussion on the Lush Summit’s Migration Stage suggested that aspirations around the representation of refugees and asylum seekers appear to be shifting away from the media’s ever elusive target of “neutrality” and instead towards “humanisation”. After all, behind the paralysing statistics and loaded language, lie the stories of children, families, friends and neighbours. It is these stories, when reported accurately and compassionately, that will reveal ‘The Truth About Fake News’.

RAPAR are a Human Rights charity in Manchester supporting refugees and asylum seekers. If you would like to know more – click here