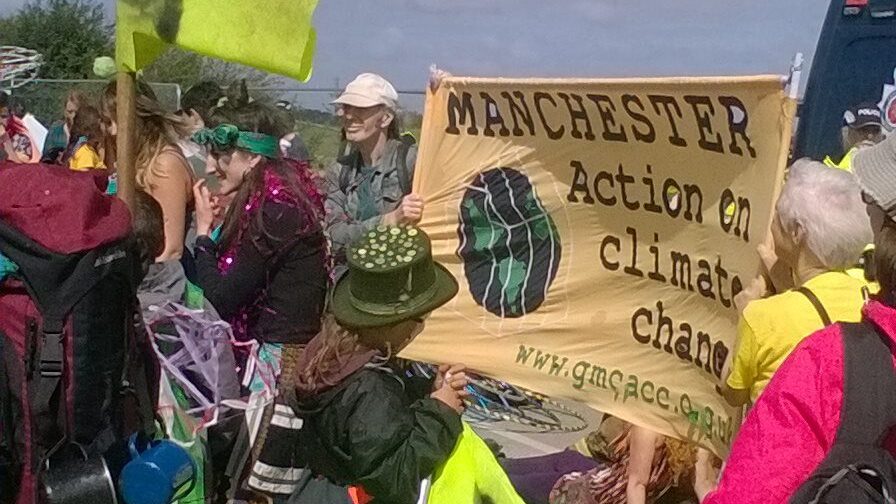 A month of rolling protest at Cuadrilla’s hotly disputed fracking site at Preston New Road in Fylde culminated in a Carnival For A Frack Free Future demonstration on Friday 28 July.

Amongst the diverse and colourful attractions at the Carnival were a larger-than-life hare, a Mr Blobby impersonator and a world record conga team – congaing all the way from Blackpool. A sizeable contingent from Greater Manchester was present, including anti-fracking stalwarts Bez, of the Happy Mondays, and Anne Power of Manchester Green Party showing their support along with many others.

Power, from Chorlton, was an anti-fracking fixture at the Barton Moss protests (2013/14) through rain or shine, despite being 82 at the time. She won the Local Hero Award from The Observer for her activities then, and told The Salford Star her opinion of fracking:

“It’s yet another con by the rich on the poor, destroying the whole environment. It’s totally outrageous because it’s backed by the Government in secret. They’re rushing it through, selling off England because they don’t care. There was one of them on the TV, gloating because the whole North West was ripe for fracking.”

Cuadrilla began construction of the site in January of this year and was expecting to have started drilling wells by now, in preparation for the controversial hydraulic fracturing process to extract shale gas.

However the company’s operations and those of its suppliers have been severely hampered by protests. On the day before the carnival, Cuadrilla had resorted to bringing in a drilling rig in the early hours of the morning, in breach of its planning conditions with Lancashire County Council.

Coralie Datta, an organiser of Friday’s demo from Reclaim the Power, commented: “Over the past month, hundreds of people  travelled from across the UK to stand side by side with Lancashire residents and resist fracking being forced on a local community that said no.”

Studies have estimated that as much as 80% of the world’s fossil fuel reserves (oil, gas and coal) need to stay in the ground to avoid a global temperature increase of 2C, agreed as an international target during the Paris climate negotiations. While fracking in the US has resulted in a decline in CO2 emissions in comparison to burning coal, the process has caused huge increases in methane emissions which is a far more potent greenhouse gas. In addition to fears over methane leaks, there are documented cases of domestic water supply being contaminated in areas where fracking is used.

Mark, who works in community renewable energy, had travelled over from Yorkshire to support the campaign and linked the fracking industry to his concerns about global warming: “We need to be stopping burning all fossil fuels now, massively reducing the energy that we use” he said, but reflected: “That’s not going to happen, it’s not going to be allowed to happen, there’s just so much vested in it.”

For Mark, the best that could be done was to try and limit the damage caused by continued fossil fuel burning.

There is also an ongoing legal battle, relating to Lancashire County Council’s original decision in 2015 to refuse planning consent to Cuadrilla. Sajid Javid, the Secretary of State for Communities and Local Government, overturned the council’s decision last year, giving Cuadrilla the go ahead to start fracking. However, Preston New Road Action Group have now been granted the right to appeal Javid’s decision in the High Court later this month. 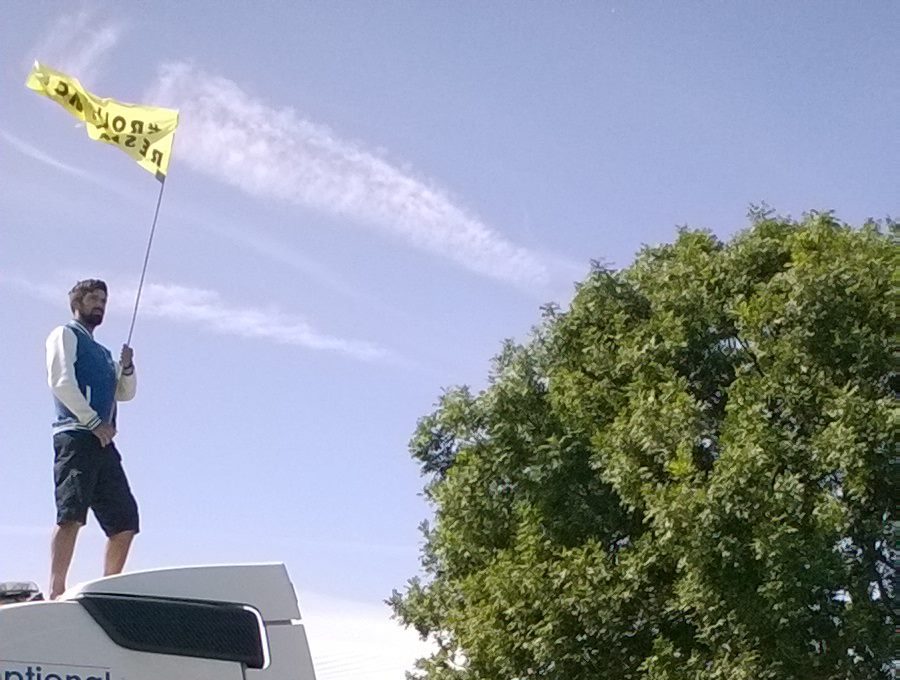 As the carnival got underway, a three day sit-in on the cabs of supply trucks was continuing, a further tactic protestors have used at Preston New Road to halt operations at the site. Three “truck surfers” had clambered on the cab roofs as a convoy carrying equipment to the fracking site came to a halt, and there the trucks had remained, creating a further partial roadblock. One of the surfers agreed to end their protest with news that the truck’s haulage firm L & M Transport intended to pull out of further work for Cuadrilla.

A statement from L & M Transport was read out to the crowd making clear their opposition to the fracking industry. It stressed that “this load was undertaken through a third party and if we had known this delivery was for the company Cuadrilla and to be used in the questionable fracking industry we quite simply would not have become involved.”

About 10 minutes down Preston New Road from Cuadrilla’s proposed drilling site is a camping and visitor complex on land at Maple Farm, provided by a local farmer opposed to the fracking industry. Anyone wanting to get involved in the protests or find out more is welcome in this space.

Fracking in Lancashire? No Thanks

Cuadrilla were contacted by the Meteor for comment but had not responded by the time of publishing. Nick Danby, a local resident and member of Frack Free Lancashire, considers the campaign a success. He told The Meteor: “Virtually every single day there’s been some kind of peaceful direct action”, adding that the public is increasingly supportive despite frequent disruption to traffic on Preston New Road.

Nick explained that Cuadrilla’s Preston New Road site is “the first of potentially hundreds on the Fylde” maintaining Cuadrilla CEO Francis Egan’s ambition is “to turn the Fylde into the largest on-shore gas field in Western Europe”.

The protests look set to continue as long as Cuadrilla, or any other company, plans to frack in Lancashire.