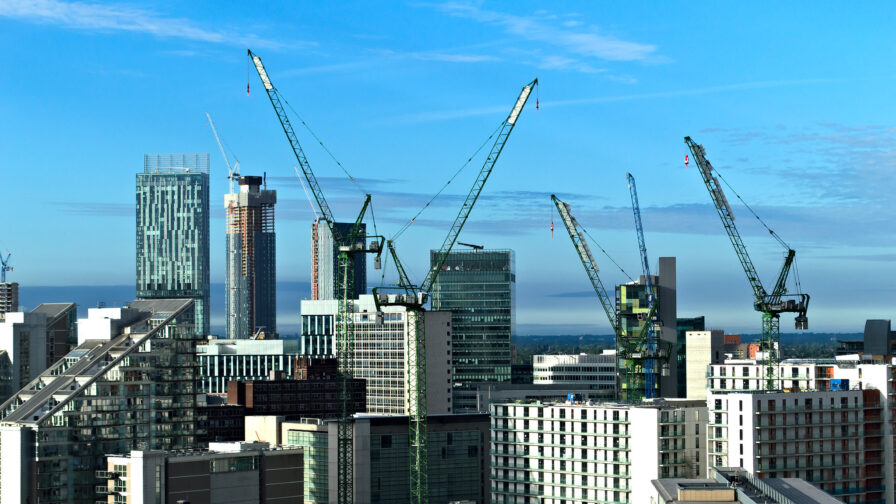 The passing of two controversial building proposals in Manchester raises the question – who does the city’s development model serve? A land commission for Greater Manchester could provide answers to that question and point the way to a more equitable use of land in the future.

Last Thursday, Manchester International Festival (MIF) made its long-awaited return, and, as we reported, beautiful participatory exhibits once again adorned the city’s streets. One of these was ‘Big Ben Lying Down With Political Books,’ a 42-metre replica of the iconic clock tower on its side in Piccadilly Gardens, coated with 20,000 political books ranging from authors like Margaret Atwood, George Orwell and Karl Marx. The monumental participatory artwork is “in some ways a response to the tussles and battles between Manchester and London, north and south, over the last year,” MIF festival director John McGrath noted. The exhibit celebrates Manchester’s independent spirit of dissent and disruption — the city’s long, proud tradition of showing two fingers to the powers that be.

On the same day, Manchester city council’s planning committee gave a figurative two fingered salute to the many Mancunians opposed to two extremely controversial planning proposals. With the first finger, it overturned its decision to stop the demolition of the 250-year-old derelict weaver cottages in the Northern Quarter; with the second it approved plans to build 850 student flats in a 55-storey “tombstone” skyscraper in Manchester city centre.

The accepted proposal in the Northern Quarter will see the total demolition of the cottages at 42-50 Thomas Street. Historic England identified the cottages as the former homes of 18th century weavers, and gave them Grade II listed status last year. There was also no affordable housing in the plans for developments to be built on the site of the cottages. The scheme was initially rejected last year. The demolition proposal was resubmitted this year, unchanged, to the council’s planning committee which considered it last week.

Bafflingly, the committee approved a scheme identical to one it had refused months earlier. The committee was advised by planning officers that this was, in fact, a “new” application. Councillor Angeliki Stogia approved of the removal of these monuments to the working class history of Manchester — what she called “eyesores” — to be destroyed for something more economically “viable”. Manchester’s future is steadily being deprived of the city’s industrial heritage. The city centre is becoming a high-rise mecca devoid of working-class residents, with a luxury skyscraper cityscape growing that mimics those of petrostate cites or financial centres in Manhattan or Singapore, while losing its individuality and the essence of what made Manchester. Renovation of heritage buildings is an option far too often overlooked, due to the financial gains inherent in new developments, which leave the city culturally poorer.

And then there is the infamous “tombstone” proposal, on the corner of Great Marlborough Street and Hulme Street, which the planning committee approved despite receiving 750 letters of objection against it. The University of Manchester also did not support the scheme, raising the serious question of whether Manchester needs the purpose built student accommodation the council insists on building.

This is not the first time Manchester city council has ignored a “tsunami” of objection. As we reported last year, 5,000 local residents signed a petition against development on New Islington Green, 94% of those responding to the public consultation also objected to the plans, and it was still passed. These latest decisions add to the widely held narrative that Manchester council does not care what local residents have to say about planning applications and that public consultations are a tick-box exercise masquerading as a meaningful participatory process.

There are those who say that Richard Leese’s strategy of “urban entrepreneurialism” – of embracing public-private partnerships to regenerate a city centre suffering from deindustrialisation – regenerated Manchester economically. And, on aggregate, Manchester is booming. But while unbridled development has created wealth, it has failed to distribute wealth. While Manchester is one of the most economically productive areas in the country, outside London, it also has the odious inequality accolades of having one of the lowest disposable household incomes, one of the highest rates of child poverty and the second highest rates of early death in England. And as members of Greater Manchester Housing Action explain, trickle-down economic approaches to development and placemaking have contributed to both the cynical commodification of Manchester’s rich cultural heritage and the burgeoning housing crisis in the city. One must ask, who does this economic system work for?

This brings us to one of the more pernicious aspects about planning in the city, a grim political reality in Manchester of the unconstituted authority of developers and consultants over local government and, by extension, us. The Tombstone tower planners are Deloitte Real Estate. This is significant because according to research by Place North West, Deloitte Real Estate was listed as advising on 80% of large-scale planning applications and development frameworks in Manchester city centre as of 2017. Not much has changed since. The East Manchester Arena, as we have reported, is being pushed forward by Oak View Group, whose partner is Deloitte Real Estate. Deloitte Real Estate also has a hand in the co-living developments, such as that on First Street and Water Street. In one day alone last year, Manchester council approved £500m worth of development for co-living accommodation backed by the planner. If this doesn’t raise eyebrows, the fact that Manchester city council’s former chief executive Sir Howard Bernstein has had a paid role at the consulting firm since 2017 should. Deloitte Real Estate is not the only corporation profiting from the planning bonanza, but it is seen as the council’s favoured planner for city centre developments, advising on the majority of significant projects. Why?

Issues with civic accountability and participation are not new. Andrea Sandor’s Civic Participation in Manchester series which we published in 2019 asked 19 local groups to describe their experience of engaging with Manchester city council — nearly all of them expressed concerns about the council refusing to listen to them. Sick of being stonewalled and ignored, these groups are beginning to fight back. Trees Not Cars’ successful challenge of a council planning decision in a judicial review earlier this year, where council officers were found to have “misled” the planning committee, show that residents are successfully opposing the council’s development model and can raise the resources to challenge it in court. If development in Manchester keeps following this current model, we can expect more such challenges in the future.

The release of the Liverpool Land Commission’s report yesterday shows that Manchester is not the only city with development issues. The report says that civic leaders should recognise “the true social purpose of land” rather than seeing it as just a “commodity”. Accordingly, land should be used to maximise its social, economic and environmental value, the commission said, and provides 13 key recommendations for achieving this.

Andy Burnham promised a land commission for Greater Manchester in his mayoral election manifesto, and housing campaigners have published an open letter to get him to keep that promise. Manchester city council have said they do not see how a land commission “would be any more transparent than is already the case” in regards to development in the city, while the report Who Owns the City shows there are many details about council land deals that are not publicly available.

With the continuing controversy around the development model being pursued in Manchester, The Meteor believes a land commission for Greater Manchester is essential to opening the debate around land use in the city region and pointing the way to development with greater transparency, public scrutiny and democratic accountability.