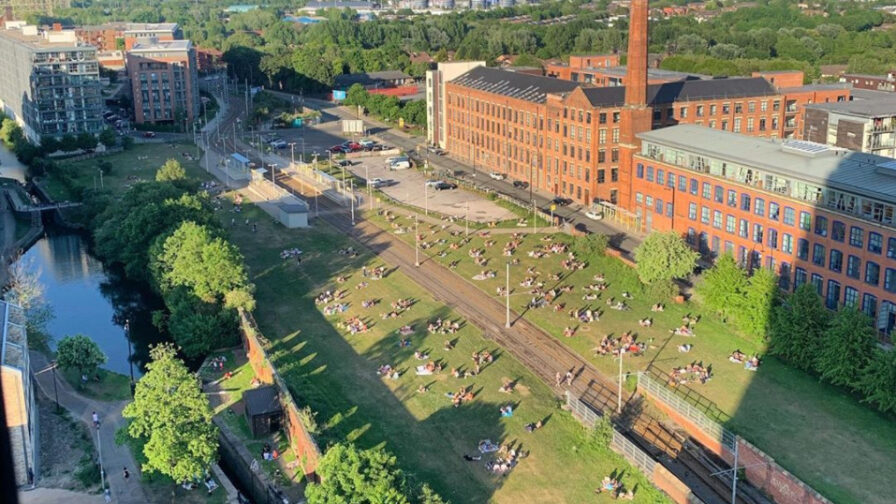 Yesterday Manchester City Council’s planning committee approved a proposal to build five offices on New Islington Green in Ancoats, despite 94% of those responding to the consultation objecting to the plans and 5,000 signing a petition against development.

The council’s decision, allowing a much-loved green space local’s refer to as “New Islington Green” (NIG) to be built on, has been met with fury and dismay by local residents who aired their concerns and disappointment online as the decision was made by the Planning and Highways Committee meeting yesterday.

The five acre open green space , which local residents have praised as a boon to them during the restrictions of the pandemic, will be built over with five office buildings of up to eight stories high. The plan put forward by the London based developer General Projects also includes a new £5m public park which will have 1.5 acres that will be grass covered and includes 55 trees.

Up until 2012 the site was an inaccessible brownfield site, earmarked for development by the council since 1999. The area, which surrounds the New Islington tram stop, was landscaped by the council and by 2014 it had become a regularly used and popular public amenity.

Planning proposals for the green have been vigorously opposed for over a year by a local campaign led by residents and supported by Alan Good, a Liberal Democrat candidate for the Ancoats and Beswick ward. Good spoke against the proposal at the meeting via video-link, raised the widespread opposition to the plan with over 700 local residents contacting him over the issue.

Good challenged the committee about the price the land was sold for, likening it to a “sweetheart deal with developers” and said, “In 2018 New Islington Green was valued at 2.38 million pounds, this is a 4.5 acres site. The year before the council spent £37m buying back the central retail park 10.5 acres. This is seven times more per acre.”

Good questioned why this deal had been done in the middle of a pandemic when people are moving to working from home. He said that over six million sq ft of office space had been approved in the last two years, and suggested nothing would be lost by waiting to see what the medium term impact is on working culture due to pandemic changes. Good also pointed out that no cycling infrastructure had been included on Great Ancoats St to accommodate the six hundred cyclists that were predicted to use the site. Good also aired his concerns around the consultation responses to the proposal:

“What proportion of consultation feedback needs to be objections for the committee to reject it. Because if this application is approved then apparently 94% of objections from nearly 600 residents isn’t good enough… We are told this council cares about what residents think but time after time they are ignored. We are told that the council cares about protecting and expanding green infrastructure, but then of all the brownfield sites this public greenspace is flogged off to developers… Please reject this planning application today. Show people that consultation works and give people faith in the planning process.”

Jacob Loftus, founder of General Projects, told the meeting of the benefits the development could bring to the area. He estimated that 3,500 jobs would be gained in east Manchester and that up to 200 SME businesses would be attracted to the hub created which is predicted would add £165m gross value to Manchester’s economy yearly. Loftus promised all buildings would have “openable windows”, seemingly a must have since Covid. The development also includes a community and social impact programme, which would see £8 million go into the local community over the first five years of the project. Overall Loftus said the project would be “transformative” for east Manchester and provide “unprecedented economic and social value.”

Local Labour councillor Emma Taylor presented evidence to the meeting and objected to the planning proposal due to the loss of green space and the adverse knock-on effects to residents’ health and wellbeing. Taylor said her colleagues cllr Dar and cllr Battle had also received lots of correspondence from residents across Ancoats and New Islington that were opposed to the proposal.

The planning and development manager of Manchester City Council Dave Roscoe refuted the claims made by Good that the proposal went against the councils core strategy as the proposal had to be considered against the core strategy “as a whole” and not against “ individual policies” and that he believed that “on balance it does agree with core strategy when you take it as a totality”. Against Good’s allegations of “sweetheart deals” due to the low price the land was sold for Roscoe said that the price of the land was not a “material planning issue” and so should not concern the councillors on the committee when considering the proposal but added that the “council should seek best value.” Roscoe said the job opportunities and “economic gains are an essential component of the application” and that local businesses are supportive of the application.

Natasha Johansson a resident of one of the nearby residential blocks with dangerous cladding that is yet to be removed, referring to the NIG proposal said:

“Here’s hoping the committee puts the lives of human beings – unable to move due to cladding – over developers who’ve ruined our lives and keep on hurting us… Mr Loftus – you’ve not listened to anything we’ve said. 94% people object. Listen to people who live here! We don’t want this. Our human rights are important!”

Callum Davies said in the chat. “This committee will shortly demonstrate whether they care more for local residents or more for developers… In the designs, the developer but [sic] rowing boats in the canal. That’s everything you need to know about this application.”

Councillor Joan Davies said she “totally” sympathised with locals who have adopted this green space as their unofficial park, and called for a much more active management and provision of green space in the city. Davies said that historically the city had wealthy benefactors who would donate land to the public to use as parkland and concluded “we need to find more new ways of doing this.”

In response to the council’s decision to approve the proposal by eight votes to three, Alan Good said after the meeting had concluded:

“Every day during lockdown this park was used by local families, and individuals to meet up, relax, and play, especially those who live in unsafe buildings. “This has become our village green. It is vitally important for our collective mental health, for our physical health and wellbeing. A bit of concrete landscaping in the middle of office blocks is not a suitable replacement. Over 700 local residents have made that very clear to me and to the Council…

“The people of Ancoats and New Islington were failed by representatives, and are not having their concerns listened to. This needs to change.”