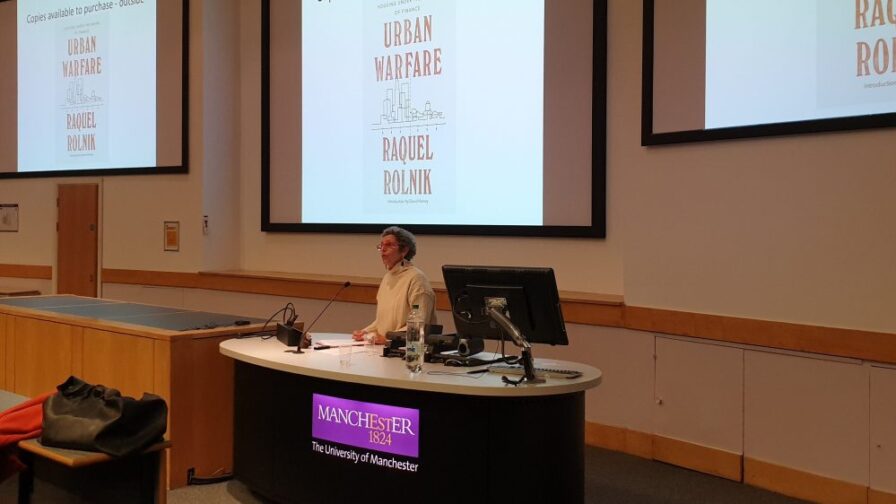 Professor Raquel Rolnik, a former UN special rapporteur, condemned the financialisation of housing provision in cities across the world, which she says is responsible for rising rents, increasing evictions and homelessness in many countries. Rolnik says neoliberal economic philosophy underpins this radical change in housing provision, which is failing to provide housing to those most in need.

Professor Raquel Rolnik, a former UN Special Rapporteur on adequate housing, condemned the globalised housing development market for its failure to provide housing for those most in need, at an event held at the University of Manchester on Monday.

Rolnik is an urban planner, architect and a professor at the University of Sao Paulo in Brazil, who originally got involved in housing issues to oppose the oppressive policies of the military dictatorship that ruled Brazil from 1964 to 1985.  In her role as UN special rapporteur in 2013 she visited Manchester and other UK cities, to report on the housing situation. The investigations led  her to criticise the lack of provision of social housing and the impact of welfare reforms, particularly the bedroom tax, and said the UK was “going backwards in the protection and promotion of the human right to housing”.

That backwards movement in housing provision has continued in the UK since 2013, and her scathing condemnation of the ongoing failure of the globalised housing market to provide decent housing for those in need took examples from her recently published book Urban Warfare: Housing under the empire of finance.

“Financialisation… covers such a range of phenomena that it is difficult to define precisely. The most cited definition, from Gerald Epstein states:

‘Financialisation means the increasing role of financial motives, financial markets, financial actors and financial institutions in the operation of the domestic and international economies.”

Excerpt from the Transnational Institute’s Introduction to Financialisation

“Neoliberalism or neo-liberalism is the 20th-century resurgence of 19th-century ideas associated with laissez-faire economic liberalism and free market capitalism. While it is most often associated with such ideas, the defining features of neoliberalism in both thought and practice have been the subject of substantial scholarly discourse. These ideas include economic liberalization policies such as privatization, austerity, deregulation, free trade and reductions in government spending in order to increase the role of the private sector in the economy and society. These market-based ideas and the policies they inspired constitute a paradigm shift away from the post-war Keynesian consensus which lasted from 1945 to 1980…”

The book explores how financialisaton is detrimental to cities and housing systems around the world. Rolnik contends that the process of financialisaton is a root cause of higher rents, increasing evictions and homelessness and includes examples from the UK, US, Chile, Brazil and Kazakhstan. Neo-liberalism is the ideology that underpins the financialisaton of housing across the globe, according to Rolnik, who provides examples of how this has been detrimental to households across the globe and how they are fighting back.

At the event in Manchester Rolnik condemned the process of financialising housing as having caused a “radical transformation of housing policies worldwide… creating housing as commodities or assets”, rather than providing housing for those most in need.

She described the big financial players exploiting the global housing market, mainly western companies, as creating a “colonial empire” that was “faceless and flagless”, that used IT systems to conduct their transactions through an “electronic cloud”, which further distanced themselves from the countries and housing developments they were involved. The majority of these transactions will take place through tax havens. These tax havens, or secrecy jurisdictions, often hide the ultimate owner of the shell companies set up in these jurisdictions to facilitate the massive financial flows passing through the offshore financial sector.

Tax havens, secrecy jurisdictions and offshore finance are generally terms that overlap, and can be applied interchangeably to a jurisdiction (a country or a region of a country, and its laws) depending on what you are trying to emphasise.

So for example the British Overseas Territory of the British Virgin Islands (BVI) can be described as a tax haven, because a company registered there will pay no corporations tax or any other kind of tax there. It will also pay no tax on profits transferred to this company by companies or individuals in other countries such as the UK. In 2017 research showed that BVI companies control $1.5 trillion in assets. The BVI comes top of the 2019 Corporate Tax Haven Index, complied by the Tax Justice Network (TJN).

The BVI can also be described as a secrecy jurisdiction, according to the TJN, due to:

“the BVI’s lax, flexible, ask-no-questions, see-no-evil company incorporation regime, which allows owners of companies to hide behind ‘nominees’ to achieve strong secrecy, and to set up companies quickly and at low cost. This supposed ‘efficiency’ of incorporation has translated into carte blanche for BVI companies to hide and facilitate all manner of crimes and abuses worldwide.”

The secrecy provided to the ultimate owners of companies registered in the BVI has led to it becoming the world’s leading centre for company incorporation with over a million companies incorporated since 1984. In 2017, there were 417,000 companies incorporated in the BVI, two-thirds of them corporate subsidiaries.The British Virgin Islands comes in at 16 (out of 112 jurisdictions listed) in the 2018 Financial Secrecy Index compiled by TJN.

Offshore finance applies to the BVI because it is an island in the Caribbean, offshore from the UK and the many other countries where people and corporations have decided to incorporate a company or trust in the BVI. The term “offshore financial centre” (OFC) is one that the BVI uses to describe itself as it doesn’t hold the negative connotations of tax havens and secrecy jurisdiction. However many jurisdictions, such as Luxembourg and Hong Kong, that offer OFC perks such as tax avoidance and secrecy are not located on islands, although the largest users of these centres are usually from overseas, so the OFC is “offshore” to them. [/expand]

These financial flows, often flowing out of the country where the housing is situated, also have another primary direction of travel, says Rolnik – from the public sector to the private sector.

Building of housing by private companies in Chile, for which the state provides subsidies for people to buy or rent, and the privatisation of public housing in East Germany, are two examples provided by Rolnik of this flow of public money to private interests.

Another prime example of this used by Rolnik, is the Conservative Party PM Margaret Thatcher’s Right to Buy policy in the 80s, which saw council houses, built with public funds, sold to tenants with large discounts to the market valuation. Promises to replace council house losses due to Right to Buy were broken, and the number of council houses dropped from 6.5 million in 1980 to 2 million in 2017.

Almost 40% of the homes sold under Right to Buy were shown to be being let in the private rented sector, with some rents being up to seven times the cost of average council house rents. The public purse losing out on the rents paid to local authorities and any housing benefit payments involved in supporting the tenancy. The Conservative Party, which likes to call itself the party of ”home ownership”, has seen the home ownership rate fall from 70% in 2011 to 65% in 2018.

It is facts like these that Rolnik says reveals “the inconsistencies of neoliberal narratives” that say relying on market forces to determine housing provision would allow everyone to own their own home. Rolnik attributes Margaret Thatcher’s policies in the UK, and Ronald Reagan’s in the US, to starting this “global process of change” in housing provision.

The use of Public Private Partnerships (PPP) is another means of transferring public assets and wealth into private hands, says Rolnick, generally through the use of public land in these developments. This issue is particularly relevant to Manchester where the city council is involved in two controversial and huge property development PPPs.

One of these is the £1 billion business partnership with the state of Abu Dhabi, through the Manchester Life Development Company. The other is the partnership of the council with the Far Eastern Consortium for another £1 billion development known as the Northern Gateway, the largest residential development in Europe. Both deals involve transfer of public land to private companies, with full details undisclosed, and social and affordable housing provision is expected to be minimal through both PPPs. Manchester City Council has also sold off more public property than any other local authority in less than five years. In total 673 properties were sold between 1 April 2014 and 31 July 2018.
source?

Inadequacies of housing are often seen as a problem for the Global South, but Rolnik reports that her investigations into neoliberal theory driven financialisation of housing, with a preference for building rented sector housing, has increasingly shown that it is a growing problem in Global North countries such as the UK and US.

But this financialised model of housing has spread from its starting point in the Global North to countries in the Global South, to exacerbate their housing problems and extract rent from the poorest of the poor. This process, Rolnik says, has been aided by “financial capital’s hegemonic force over nations” which in turn has been assisted by the “World Bank and International Monetary Fund (IMF) getting behind the [financialised] rental model in the Global South.”

The rise of a financialised, primarily rental, housing market has come about by design rather than accident, says Rolnik. She described speaking to government officials during her fact finding tour to the UK in 2013, who said they wished to promote rental housing after the financial crash of 2008.

Rolnik’s talk was organised via a collaboration between the University of Manchester’s Global Development Institute and Greater Manchester Housing Action (GMHA), a campaign group tackling the multiple issues that make up the housing crisis. Issac Rose, a co-ordinator with GMHA, addressed the audience after Rolnik to describe GMHA’s work since 2015 when they established. He spoke of organisations that inspired their formation such as Focus E15 mothers, and the Radical Housing Network.

Describing  their work as “part of a political battle about who our cities are for” Rose then spoke of how much of their work was aimed at altering council policy regarding housing development, and highlighting their dubious business dealings, including that with the abusive state of Abu Dhabi. Rose said that there were huge amounts of wealth flowing into the city, but that:

“The council is unwilling to capture that wealth to provide social housing, collect Section 106 money from developers, or use public land for social housing.”

To wrap up her talk Rolnik spoke of the many, new and varied campaigns that were fighting for better housing and against the financialised model of rented housing. Squatting is a major tactic in Rolnik’s home city of Sao Paulo in Brazil, tenants unions are on the rise in the UK and Spain and in other countries there are very strong movements for social housing. Rolnik said:

“So we are talking about a process of displacement versus a process of emplacement. Emplacement means community building, it means creating landscapes for life and not landscapes for rent… it’s about time to end with the idea that public spaces are the private property of the government. Public spaces are our common property, of the citizens… every space which is taken out from the playground of financial capital today, is a place of resistance and it is very meaningful and very important.”

Read other property development stories by The Meteor here.

The next Global Development Institute event, which is free and open to all, is with Prof Anthony Shorrocks – Wealth Levels, Wealth Distribution and Wealth Inequality: A Global Perspective. At the University of Manchester, 17:00 -18:30, 23 Oct 2019. Full details can be found here