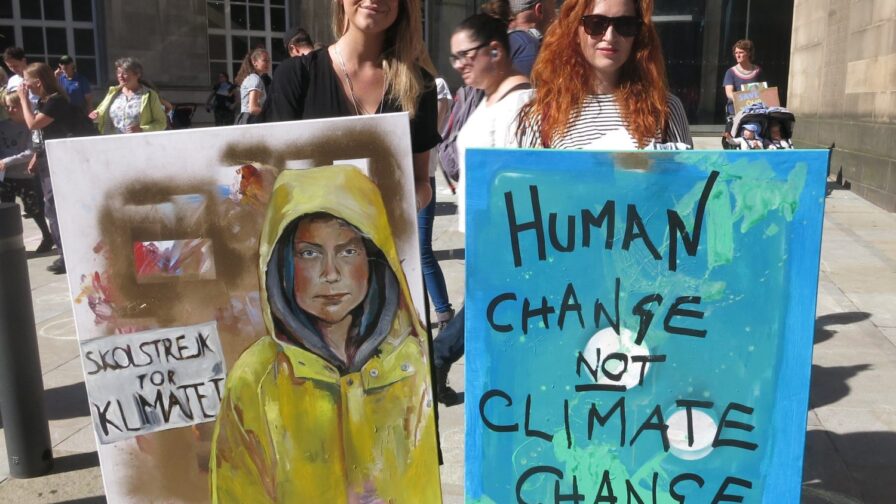 On Friday the people of Manchester participated in the largest climate strike in history, joining 150 UK and 2,500 worldwide demonstrations critiquing government inaction on climate change.

St Peter’s Square took on a different shape during the event – it became a place where the voices of young people were heard as they got on the microphone one by one to speak truths about climate change that the current government appears reluctant to hear.

UK Student Climate Network (UKSCN) organised 150 events across the UK, to pressure the government to take tougher measures to address the climate crisis. The Manchester protest connected the local to the global – supporting the campaign to stop an unused site in Ancoats being turned into a car park, and demanding a green space instead.

UKSCN research reveals that 82% of the British public believes the UK government needs to change its approach to climate change. The UK Strikers have four demands, which include the implementation of a Green New Deal, and placing the ecological crisis as a priority on the national education curriculum. They also want to lower the voting age, so that the views of young people – who have the biggest stake in the future – can be incorporated.

The global strike is inspired by the school strikes that began in Sweden and spread across Europe, commonly associated with schoolgirl and now prolific climate activist Greta Thunberg. Thunberg went on strike from school for 30 days, sitting outside of the Swedish Parliament to protest the lack of action on climate change. Thunberg’s call for governments to “wake up” to the realities of ecological crisis culminated in Friday’s mass protest.

Friday’s strike was timed to coincide with the UN Climate Action Summit, which takes place in New York today. Participants of the 2015 Paris Agreement – a landmark agreement on climate change, now ratified by 185 countries – are expected to present their new plans for addressing climate change at the summit.

The global climate strike’s overall objective is getting governments to commit to tougher climate targets, and faster transitions to renewable energy, right now. As Thunberg says, “I want you to act as you would in a crisis. I want you to act as if our house is on fire. Because it is.”