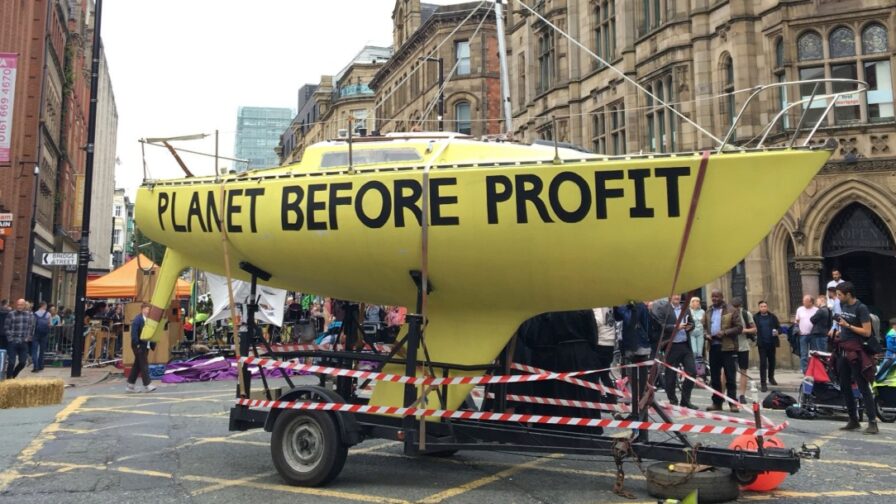 Extinction Rebellion gave a powerful demonstration of peaceful civil resistance last weekend. By occupying Deansgate they stood in the best of Manchester’s traditions of protest. Manchester Momentum and Manchester Labour for a Green New Deal are proud to stand in solidarity with these campaigners and call for the election of a Corbyn government to bring about the political shift necessary to address the climate crisis.

The actions during the weekend’s ‘Northern Rebellion’ were a real demonstration of the power in the climate movement. The past year has seen sweeping changes in the UK’s attitude towards climate change and nobody can doubt the role that Extinction Rebellion (XR) have played in this. By putting themselves on the line in order to convince our leaders to take action they have lit a flame beneath the climate movement. In doing so, they have reached out to millions of people in a way that climate politics has failed to do in recent memory.

The group’s inventive and creative non-violent disruptions have been refreshingly frank in the face of a world which has repeatedly denied, ignored, and watered down the threat of climate breakdown. All of us who want a liveable future owe XR a huge debt of thanks.

However, XR cannot be the whole story. By themselves, they will not be enough to rewire the system that is destroying the planet. Climate breakdown is the product of capitalism, and whilst many members of XR might recognise this, without a model of change they are not equipped to tackle it themselves. XR have not connected the system’s destructive relationship with the planet to its multitude of other failures. It is just as disastrous for workers, immigrants, and the disabled. This is why tackling climate change needs the labour movement, and the labour movement needs to tackle climate change.

The Green New Deal is crucial: it will unite the groups suffering under our unequal system and build a sustainable future for all – with green unionised jobs, affordable public transport, and properly funded public services. A Labour government with a radical socialist manifesto will work to deliver this future.

Yet to achieve this, XR and the wider climate movement are essential. XR have lifted us onto a new plane of discussion which assumes the impending threat of climate breakdown. Their continued action means that the severity of the issue will not be lost in policy discussions. The pressure needs to remain, even if the Labour Party wins a general election with a Green New Deal agenda – because this issue isn’t going away.

XR’s opposition to our economic system and its destructive relationship with the planet is naturally compatible with the message of Corbyn’s Labour Party. This Labour leadership are the most responsive and supportive of the climate movement in the party’s history. Already Jeremy Corbyn and Diane Abbott have spoken to XR about their duty to recognise the climate emergency, and recently John McDonnell defended the group in court. Corbyn also made the step of creating a Shadow Cabinet position for climate justice who will directly liaise with Extinction Rebellion.

Only a government unbeholden to the interests of fossil fuel lobbies and billionaire tax dodgers will be able to bring about the necessary restructuring of our economy. A Conservative or centrist-led government will always be seeking to return to ‘business as usual’ as soon as possible, just as London Mayor Sadiq Khan said in response to XR’s blocking of bridges in the capital. This attitude is everything the activists want to put an end to; the idea that somehow the normal operations of a corrupt system should have priority over recognising the crisis we face. A Labour government under Corbyn will not be so afraid of change or challenge.

A powerful climate movement from below and Corbyn as Prime Minister will be necessary to tackle the climate breakdown. Neither can succeed alone. The coming General Election will give us the opportunity to bring about the change we so desperately need.