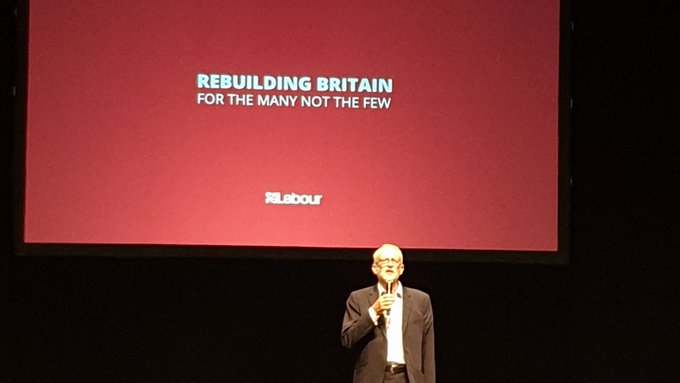 On Monday 2 September, the Labour Party held a rally at the Lowry in Salford. I’d only received notification of it the night before, but even at such short notice it was an opportunity not to be missed. A snap general election is likely, and Labour is getting their message out while the current government is engaged in an internal battle. With big names announced in the speakers’ line-up, it seems that Labour is using this rally to get attention and high attendance numbers in a city that’s traditionally supported Labour.

Like the last election, Labour are counting on social media and word-of-mouth to get their message across. The Conservatives underestimated the power of grassroots campaigning in 2017, with both seats and vote share lost to a Labour Party that they expected to crush at the polls. While the mainstream media has given more exposure to Conservative policies and politicians, left-leaning voters are exploring other outlets for their news. The responsibility for countering the Establishment-approved media messages lies with us, the independent media and the grassroots activists. Events like Monday’s rally are a call to Labour activists to get organising.

Hundreds of Labour supporters were led into the Lyric Theatre at the Lowry Centre. While we were getting seated, we were treated to some mood music that was reminiscent of Blair’s “Cool Britannia” vibe. Perhaps this was an unexpected choice for a Corbyn rally, but it certainly got the crowd warmed up and allowed a little levity in these very serious days. The inevitable performance of “Oh, Jeremy Corbyn” occurred when Seven Nation Army came on. It would seem that Labour’s PR team know exactly what audience they’re playing to.

The proceedings started with an introduction by Salford’s deputy mayor, John Merry, and we were treated to talks from Angela Rayner, Rebecca Long-Bailey, Diane Abbott, John McDonnell, and finally, Jeremy Corbyn. The main theme of the talks was social justice and the economic reforms needed to support it. Austerity was derided as being “about attacking the living standards of the poorest,” by Corbyn, who went on to say “the Tories are very good at transferring wealth – into the wrong places”.

Regarding an upcoming election, many of the speakers mentioned the announcement made earlier that evening – while the rally was being set up – that Johnson had “bottled it” on calling an election. We were all expecting him to call Labour’s bluff with a snap poll, but he decided against it. Compare that with this week’s headlines in the mainstream press calling Corbyn a “chicken” for abstaining on the motion to hold a general election on 15 October, and it would seem the mainstream press think the electorate have very short memories. However, the timing of the election is part of the strategy, as is the media manipulation. Corbyn can only win if the public see beyond the headlines and Johnson’s bluster, and recent polling data still suggests a Conservative majority.

Both McDonnell and Corbyn emphasised the importance of Labour activists connecting with other people. “We’re winning the arguments in parliament and we’ll win the votes,” said McDonnell. But he warns the campaign will be a dirty one. He said he couldn’t think of any politician smeared as much as Corbyn, and it’s likely that the mainstream press will target other left-wing figures. But sticking together and not allowing the right to divide the working class was one of the event’s key messages. And that division could come from anywhere. Corbyn noted regional inequalities that can only be overcome by proper investment, and then there is the spectre of Brexit that has ripped the soul out of this country – when what the public were really angry about was the state of the UK, not the EU. Labour needs to heal these divisions and unite the working class, which it intends to do by repairing the damage of nine years of Tory rule.

The other key points from the rally were focused on strengthening social protections: pensions, housing, a £10 living wage, the NHS and education. Rayner, Long-Bailey and Abbott spoke of how the labour movement gave them the opportunities to succeed – opportunities that they would not have had without the support provided by the welfare state and public services. The stability and security of a council home, free higher education and benefits in times of need – all things that have been stripped from society’s most vulnerable.

Their stories are the type of messages that ordinary people can relate to, and that was the point. The Conservative government is filled with MPs with a private education and a detachment from the concerns of ordinary people’s lives. Having shadow cabinet ministers from working class backgrounds demonstrates that Labour actually represents the working class, rather than just saying that they do. Corbyn spoke of his engagements with the public: “over the past month, I’ve done about 40 events all over the country. And people are angry.” This is the type of political engagement that the mainstream press aren’t covering, and it’s the strategy that Corbyn’s Labour is sticking with. Listening to ordinary people and creating policies that will positively affect their lives, but relying on support through direct engagement rather than creating an idealised impression of Labour’s values in the media.

McDonnell and Corbyn outlined the changes necessary to redistribute wealth to ordinary people, and set out specific policies that Labour would pursue in power. These were all things already stated in their manifesto; no surprises at a last-minute rally. The novelty was in the speakers’ delivery of their speeches and the reaction of the crowd. Diane Abbott notably received rapturous applause before she’d even spoken a word, and McDonnell thanked her after her speech not only for her words that evening, but for her persistence in spite of the disproportionate abuse she has received in the media and online. It was clear that she had the confidence of the audience on Monday evening.

Labour positioned their social justice goals as “not about whether you voted Leave or Remain, it’s about what sort of country you want this to be”. Diane Abbott asked, “do we want to be a country where homeless children are living in shipping containers? Do we want to be a country where when Donald Trump says ‘jump’, our PM says ‘how high’?” Labour’s stance is being positioned as a matter of standards and social progress, rather than of our divisions over EU membership. Corbyn wants, and needs, to unite the country to begin the process of repairing the damage caused by Brexit and austerity policies.

Unlike his early days as Leader of the Opposition, Corbyn’s performance was eloquent and sharp, yet he retained his authenticity and principles. Unfortunately this is not the image of him portrayed in much of the media, and many people will remember him as a quiet and unready politician with no new evidence to counter that. Corbyn and the other speakers presented a clear and consistent message, and galvanised support. We were asked to take away a message of hope – that things will be better under Labour, and I could really feel the hope within that room. The question now is whether it can be successfully conveyed to the electorate.

The high note at the end of the event was complemented by the surprise arrival of far-right protestor James Goddard outside the venue. Alone but for a megaphone and a couple of supporters, he was yelling mostly incoherent bile at anyone walking to get the tram home. I didn’t even know who it was until I checked the Manchester Evening News later that evening. Apparently Goddard was arrested after yelling at Corbyn’s car – the far-right literally shouting at traffic.

What a time to be alive.