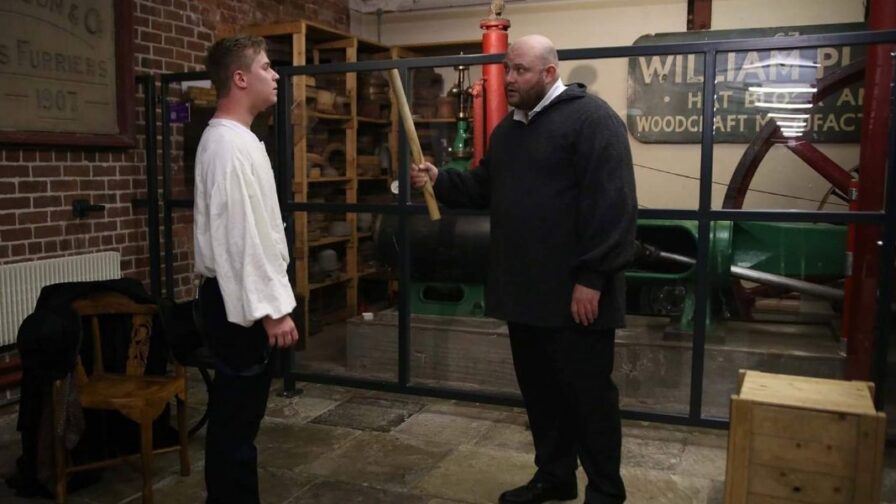 The lessons of the Peterloo Massacre have not been learned and those campaigning for reform decades later are still being slaughtered by government forces. Review of The Riot Act by Rob Johnston, performed as part of the Greater Manchester Fringe 2019.

The year 1842 was one of great hardship for workers across the north west of England. High bread prices and reduced wages for workers and the dismissal of calls for universal male suffrage by Chartists led to strikes and disturbances in the summer. In this new play writer Rob Johnston has chosen Preston to tell the story of workers and mill owners, as the political situation reaches boiling point.

It is the night before a planned mass protest by striking workers. Two actors, Jake Talbot and Christopher Ward, play both the mill owners and the weavers. It is 23 years after Peterloo: two weavers meet and discuss their lives and what could happen the next day. The older weaver (Christopher Ward) counsels the young man over using violence and his hopes for a better future. But George who cannot read or write, played by Jake Talbot, feels he has nothing to lose. He believes that the soldiers are just workers wearing uniforms, and thus pose no threat.

Talbot and Ward then take on the roles of the mill owners. Samuel Horrocks, played by Ward, is also the Mayor of Preston and wants to use force to get the workers back at the mills and rejects the liberal ideas of his peer Denholm. Challenged about using the army to attack the workers, Horrocks proclaims he has no scruples about reading the Riot Act.

The scene is set. On 12 August 1842 the Riot Act was read in Preston: four men were killed and many injured. It was the only time during that year that the military were used to attack workers with bullets.

Johnston, for his play Dark Satanic, was previously longlisted for the Royal Exchange Bruntwood Prize and was winner of the Best Drama category at the 2017 Greater Manchester Fringe Festival 2017. The Riot Act was performed by the Breathe Out Theatre company as part of the 2019 Greater Manchester Fringe and Manchester Histories Peterloo 2019 dramatic offerings this year; which is 200 years since the Peterloo Massacre. This last performance listed in the current run was performed at Manchester Central Library on the 20 July.

Johnston’s play is a relief from the constant imagery of passive workers that has been flogged to death around the Peterloo commemorations. I particularly liked the referencing of women and children defending themselves by hitting back at the police and army with stones.

Riot Act is a wordy and worthy play, that stands out from the Peter-lite that has been served up so far as part of the 200 year commemoration of the Peterloo Massacre. I give it a well-deserved full five stars. We need more plays like this that recover the revolutionary nature of the 1840s and the workers who made that leap forward in working class history.