Manchester’s media co-operative takes wing: we need your help to make it soar 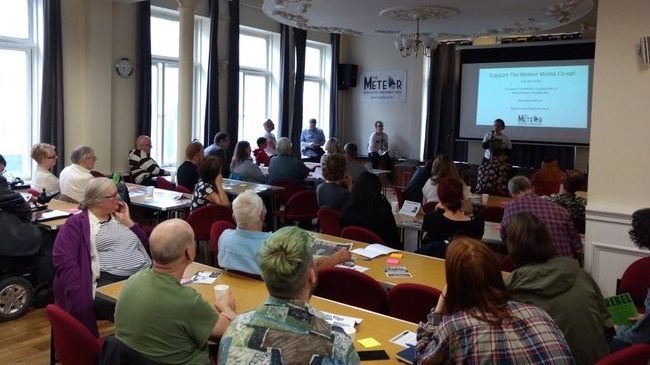 The Meteor media co-operative was launched on Thursday 4 July, a date we have adopted as Manchester’s media Independence Day. Manchester’s citizens and community organisations gathered at the Methodist Central Hall for an evening of performance, celebration and active discussion on the current state of our local media and how together, through a co-operative model of ownership, we can alleviate some of the problems it faces and increase the diversity of stories told and the voices telling them.

Traditional media is in crisis. As The Meteor set out in our previous editorial, a shrinking number of corporations control more and more of our media as they try to survive the IT revolution. Journalists are laid off and titles closed, as the media corporations protect their bottom line and shareholder payouts. This relentless attrition of the press results in the reduction of high-quality public interest journalism and a “democratic deficit”, as identified in the Cairncross Review.

There is a growing movement towards establishing new models of media ownership which seek to overcome this crisis, such as the Bristol Cable, The Ferret and New Internationalist. All of these outlets have gone beyond a superficial subscription model to create collectively owned publications that are more democratically accountable to their contributors and the wider community they serve.

The Meteor believes the time is right to challenge the dominant form of media ownership in Manchester and seize the opportunity present in this crisis to provide a democratic media that will best serve the interests of the communities we report to.

This crisis, which within it holds the potential for a radical reshaping of our local media scene, was the context for our event entitled ‘A democratic media for Manchester.’ During the evening, attendees heard from a panel who shared their insights on local media, democracy and sustainable ownership models, as well as spoken word artists Eddie McAlpine and Jackie Hagan who shared poetry about a range of issues affecting the people of Manchester, from the NHS to disability to class.

Panel members for the discussion included Alice Toomer-McAlpine – co-editor of The Meteor, Steve Kingston – editor of the Salford Star, Petra Morris – co-operative development manager at Co-operatives UK, Chris Rea, – chair of local National Union of Journalists branch, and Allan Wort – financial director at The Media Fund. Following the panel members contributions, the room engaged in a discussion about both the challenges and opportunities presented by the crisis our local media is facing.

Some of the key challenges noted by the panel and in the resulting discussions included:

Despite these challenges being huge, it was clear throughout these discussions that the inevitable breakdown of traditional local media models is clearing a path for those who want to do things differently. One attendee described the situation as a chance “to start fresh in a new era”. Opportunities identified in the room included:

In order for The Meteor to be able to not just deal with, but be an active a part of, the rapid change our media landscape is going through, we need to work together with Manchester’s diverse communities, sharing knowledge and resources, and enabling active and constructive conversation around and alongside the work we produce. The Meteor is committed to involving our community in these conversations every step of the way.

Our co-op journey began last summer with a public meeting where we looked at different media co-operative models and listened to people’s views on how we should move forward with our plans. Since then our team of volunteers explored governance models and legal structures, developed a business plan, secured support from Co-ops UK and mentoring from the Bristol Cable and we are now a newly incorporated Community Benefit Society (a type of co-op), meaning both workers and wider community members can become members of the co-op, giving them voting rights at our members’ meetings and the ability to elect and stand as members of our board of directors, which will be made up of both worker and community members .

Help to kickstart the co-op: donate to our crowdfunder and sign up for co-op membership

We have now been granted co-operative status and are in the process of setting up our membership systems. In order to do this, we are running a crowdfunder to raise the money needed to set up these systems on our website, as well to fund a co-working space for our team and further investigative work and community journalism training courses.

We are currently taking pledges from those who wish to join our co-op, so if you want to join please register your interest here, and donate to our crowdfunder to kickstart the co-op.

In response to lots of positive feedback about our performers Jackie Hagan and Eddie McAlpine, The Meteor will be hosting an open mic night on Sunday 11th August, at Gullivers Pub in Manchester’s Northern Quarter, for local musicians and spoken word artists to come and share their stuff. If you would like to perform at this event, please get in touch.

We also had lots of people at the event expressing an interest in contributing their time to The Meteor, and are inviting them to join us for an informal volunteer meet up on 29 July in Manchester City Centre. If you are interested in regularly contributing your time to The Meteor, whether that be through producing content or supporting the development of our organisation, and would like to join us on the 29 July, send us an email introducing yourself and why you want to get involved or call 07504331959.

We were overwhelmed by the support and solidarity shown by attendees of ‘A democratic media for Manchester’, and are continually grateful to be a part of such an exciting scene of passionate Manchester citizens, who want to see positive change in their city and beyond. We look forward to working with you all as we grow and develop The Meteor media co-op over the coming years, for a locally rooted, collectively owned and democratically accountable media for Manchester.