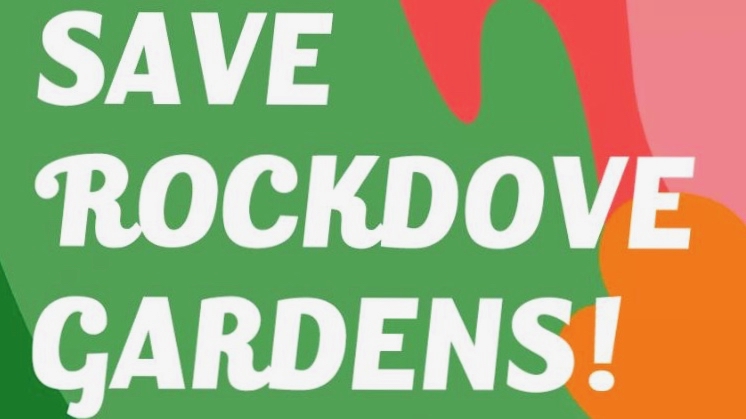 Residents of Hulme’s Bentley House estate – popularly known as the Redbricks – are organising to halt the destruction of a much-loved community garden.

The current plans will see 24 trees cut down and a new pedestrian pathway running along the back of then exposed flats. The estate, on the edge of Mancunian Way, is situated in one of Manchester’s most severe pollution hotspots.

The estate is managed by mixed tenure landlord One Manchester, who has agreed the sale of land, on which the gardens were located, to Manchester City Council for the expansion of the nearby roundabout.

The works were planned more than a year ago but residents say they were not informed or offered a chance to formally object to any of the plans.

Public events detailing the plans in the form of non-consultary drop-in sessions have only recently been held, the first being on 11 July while the last will be held on the 23 July, around the same time preparatory works are slated to begin. Neither consultations appear to offer residents the opportunity to formally object or request changes to the development.

Local councillors Annette Wright and Lee-Anne Igbon were made aware that plans involved the development of Rockdove Gardens only when residents brought it to their attention.

“Resident are right to have lots of concerns. At best, the communication has been very poor. At worst, the legitimate issues the residents have raised, are being ignored. We will continue to push for proper consultation and communication on this scheme which may be for the whole of Manchester, but which has a direct effect on people living in this part of Hulme”.

Apart from offering an oasis of greenery for residents to enjoy, the garden along with mature trees in the central reservation and in the roundabout serve to mitigate, to some extent, the effects of air pollution. This is important not least for the children of St Philips School who endure some of the poorest air quality in the region.

Pollution monitoring conducted by Friends of the Earth on Claremont Road, just 100 metres away from the school entrance, found levels of Nitrogen Oxide (NO2), a dangerous pollutant linked to the development of asthma, far in excess of legal limits.

The Clinical Commissioning Group for Central Manchester reports one of the highest rates of emergency admissions for asthma while data from Public Health England revealed that deaths from respiratory disease among Hulme residents were 50% higher than the national average.

Resident Sarah Salem is one of many who are acutely aware of the garden’s role in minimising air and noise pollution.

“This garden is vitally needed to reduce the known negative effects of the busy motorway junction on the physical and mental health of residents. It is a community asset that provides a home to many species of trees, food for pollinators and is home to much wildlife including bats, wrens, wagtails and hedgehogs.”

The development represents a further encroachment on green space in Hulme after the park along Leaf Street was used for a luxury flats development.

Please sign our petition to help save our gardens and trees. http://chng.it/BPjZkYbs

“We recently lost the adjacent green space to a luxury flats development. HGV trucks were driving over flower beds. They felled established trees with a legal obligation to plant new trees ….

The trees are vital. Pollution is so bad in our area that I can taste the metallic effects of it in my mouth and suffer a permanent cough.

We have to protect our green spaces because no-one else will. We are angry and are ready to take direct action to prevent the loss of yet more green space.”

Residents are asking supporters to sign a petition, which has so far gathered over 1200 signatures, and to follow them on @RedbricksOnline and share tweets using #saverockdovegardens.

One Manchester was reached for comment, stating that the ongoing sale of Rockdove Gardens was agreed after Manchester City Council confirmed: “that the scheme would aim to improve pedestrian safety, connectivity, improve cycle routes, and create shared green spaces.”

They state that the responsibility for communication with residents rests with the council, as a stipulation of the sale was that Manchester City Council would “undertake all resident communications and consultations regarding the improvement scheme.”

One Manchester say they will be attending the final drop-in event on 23 July.

“The design process for the scheme is still ongoing.  A drop-in engagement event for local residents and businesses was held at Z-Arts on Thursday 11 July with a further event due to be held at the same venue on Tuesday 23 July. The final design will be informed by what we learn from residents at these events.”

At the time of writing, residents have taken it upon themselves to d-lock the gates to prevent contractors from gaining access to the site.

You can find the petition here

To find more information about the works, go to www.manchester.gov.uk/pmroundabout

Article was modified on 24 July 2019. The Meteor originally published that MCC had organised ‘consultations’. MCC has not offered events where residents would be consulted over the design. The events held were drop-in sessions where residents were not consulted and did not have the opportunity to influence the design process.