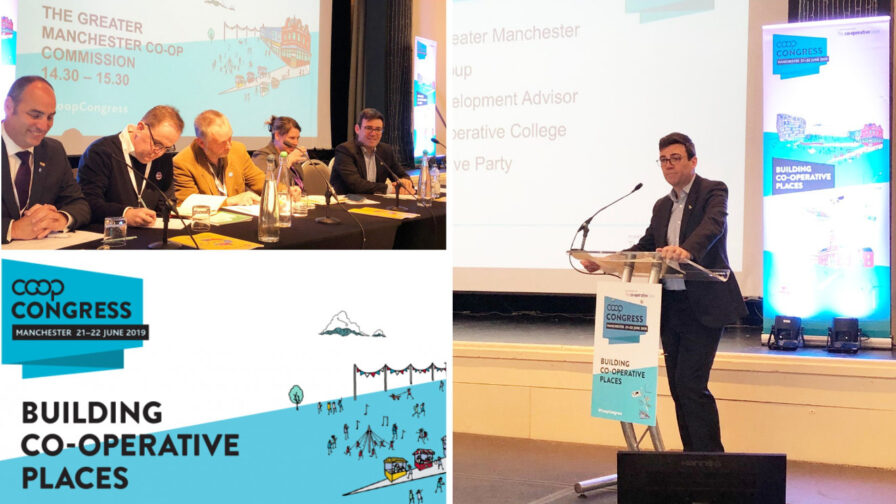 Mayor of Greater Manchester Andy Burnham has criticised the dominance of the “mantra about the free market” in shaping local economic policy and committed to pursuing a more co-operative economy for the region that sees industrial progress going hand in hand with social progress. He believes developing the “new economy” can be done while supporting the ambitious climate crisis objective of establishing a carbon neutral Greater Manchester (GM) economy by 2038.

Burnham’s speech at the Co-operative Congress in Manchester on 21 June laid out his hopes for the future of the economy in the region and explained how the GM Co-operative Commission (GMCC), could provide the answers on how to boost the activities of co-ops in the region.

At the launch of the Commission in August 2018, Burnham, a member of the Labour and Co-operative Party, promised to make GM “the most co-operative region in the UK”. The Labour Party manifesto also commits to doubling the size of the co-op sector in the UK, and the New Economics Foundation has produced a report on ways that could happen.

Greater Manchester is the birthplace of the co-operative movement, started by the 28 Rochdale Pioneers in 1844. From here the co-operative movement has spread across the world. Burnham recalled the history of the co-op in the region which complemented other struggles for social justice such as Peterloo, the women’s suffrage movement, the birth of the Trades Union Congress and the organised opposition to slavery of the regions mill workers.  Burnham said the region had championed social progress back through the centuries:

Burnham then proceeded to criticise the market failures and poor policy behind the housing and homelessness crisis affecting people across the region and called for a “new economy”, claiming that the country is not working for everyone:

“We have a situation where the market, the free market, hasn’t given us solutions and hasn’t given all the people who live here solutions. For instance the housing crisis, it’s a situation where people have been left without homes that they can afford; they can’t get on the housing ladder; they can’t have a place that they can call home that is secure.

“The most visible expression of it is the homelessness crisis we see on our streets: new thinking is urgently needed in my view in regard to housing, and how we take profit out of it.”

The next market failure on his hit list was transport. Burnham recalled Margaret Thatcher deregulating the buses in 1986; prior to that the majority of bus services in the region were run by a public body called the GM Passenger Transport Executive. Thatcher, however, did not deregulate the buses in London the same way, which led to the service offered diverging:

“We had this experiment inflicted upon us. What has happened in those 30 or so years? Bus usage has declined year on year, almost in every single year. That’s because we have had a situation where the interests of private companies have predominated over the public interest. It’s created a situation where we have very heavy focus on particular routes, but then some routes have nothing at all…”

Burnham then went on to describe the “perverse situation” where it can be cheaper for a group of people to pay for a taxi rather than take the bus, and raised the problems people face relying on buses to commute to work. An affordable public transport system was also highlighted by Burnham as being important in achieving the region’s climate change objectives.

Paul Gerrard, Campaigns and Public Affairs director at the Co-operative Group, is a commissioner on the GMCC and was also a speaker on the panel with Burnham. Highlighting the four areas the Commission is taking evidence for – housing, transport, digital and co-op business development – he called on anyone with experience in, or setting up, a co-op to go on to the website and submit a statement detailing their learnings and observations. The Commission is open for submissions till 5 September.

The Commission has already collected a range of submissions, which include information on what issues people thought were preventing co-operatives becoming a more integral part of the economy. The low profile of the co-operative movement has been one issue raised that Gerrard, who was previously a civil servant in Whitehall, has also experienced:

“I spent twenty years in government before I joined the Co-op. I was in and around the Treasury for twenty years. In twenty years around budget submissions I never, never referenced the co-op movement, that’s one of the big issues…”

Gerrard believes that incentives are another key issue for promoting co-operative development:

“There is a real opportunity… in GM to incentivise co-operative development and co-operative businesses, delivering particularly in the context of public services. At the minute I am not sure those incentives are there [in UK], but I think if you look elsewhere in the world they are undoubtedly. The co-op model is incentivised, and it isn’t here.”

The UK is the birthplace of the co-operative movement, yet other countries have proved better at promoting this shared form of ownership with ethical values and principles built in. Consider the number of worker co-ops counted in a 2015 report: Italy had 25,000, Spain had 17,000 yet the UK only had about 500 to 600.

Two other factors Gerrard thought important were scale and support. Larger scale co-ops were more likely to achieve sustainability and he suggested more support for co-ops setting up across GM was needed.

Another panel member was in complete agreement with Gerrard on the lack of support for co-op start-ups in the region. Mark Simmonds is a co-operatives development advisor with Co-op Culture and a member of Platform-6, a worker’s co-operative, who is due to give advice to the GMCC within the next month. He spoke at the congress about the poor availability of advisors:

“In Greater Manchester you can probably count the number of professionals who are delivering co-operative advice… on one hand.”

He explained that he and the other advisors were delivering advice across the country, and that he himself delivered more advice on co-ops in London than he did in Manchester; much of that advice is delivered by this small group of advisors free of charge due to lack of funding. Simmonds, who is 55-years-old, said the key problem of lack of funding is also exacerbated by the lack of capacity:

“I am probably one of the younger people delivering co-operative development at the moment. Many of the others are getting close to retirement. Even now, without really starting to try and double the size of the co-op economy, we struggle to meet demand”.

Simmonds also said the lack of awareness of the co-op option among groups considering starting up a business was also a significant problem, echoing Gerrard’s concerns, albeit in a different sector.

During question time after the panel discussion, Burnham committed to putting more funding behind co-operative development in GM via government funding expected to support the GM Local Industrial Strategy that has been recently signed off by the government, though this does not yet have a funding figure agreed for it. Burnham believes that the localisation of industrial strategy is a big opportunity for the co-operative movement, and said that reference to co-ops was scattered throughout the document, which contained:

“A clear commitment in there that Greater Manchester and government will work together to create the optimum conditions for social enterprise and co-ops to thrive.”

An economy based on insecure work and insecure housing were other key issues affecting people in GM that Burnham addressed during his speech. To combat insecure work the Mayor’s office is bringing through a Good Employment Charter that aims to target public procurement so that companies will not be able to benefit from public contracts unless they are a good employer. Burnham suggested that this would benefit co-ops because of their inherent ethical stance on employment.

Responding to a question from The Meteor about his plans to tackle insecure housing, the Mayor referred to the recently published draft of the GM Housing Strategy, which he said: “Makes a commitment to building 30,000 homes for social rent over the next decade”. He added that there would be an additional 50,000 affordable homes overall (this figure includes the 30,000 previously mentioned) built under the plan using the GM definition of “affordable”, which the strategy paper says has yet to be defined. Manchester City council’s definition of affordable currently works out less than the generally accepted 80% of market rate.

Burnham also raised a new model of housing being developed in the region to help the vulnerable:

“Paul [Dennett, mayor of Salford] and I recently laid the foundation for a new development that will offer all-in housing for people who have been homeless. So it is like a weekly payment that covers absolutely everything to help people to manage their finances.”

There were more innovative models to reduce housing insecurity “bubbling through”, Burnham said, including a Good Landlord Charter, which could possibly identify unscrupulous landlords and then “transfer some of those properties out of the private rented sector”. Again he said that the housing strategy could be a big opportunity for the co-op sector in the region and he hoped the GMCC would look into the strategy and take forward the ideas within it, and perhaps take the lead in building some of the 50,000 new affordable homes promised.

Its currently Co-operatives Fortnight 24 June – 7 July. You can follow whats going on using the hashtag #CoopFortnight