Why we students should back our lecturers on strike 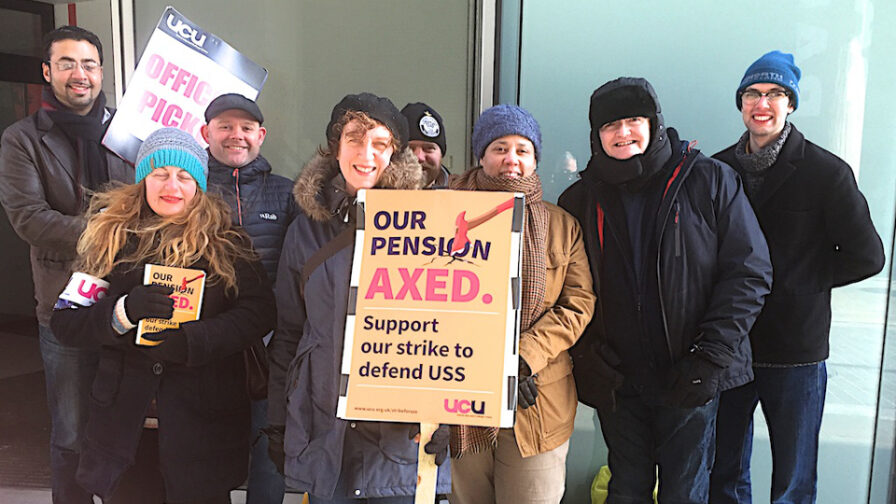 If ever there was a situation when students and academics should be thinking as one, this is it. Coverage of the dispute between university tutors and management is focusing on the proposed cuts to pensions. But what is largely being overlooked is that the whole situation is a result of the creeping commodification of higher education, and that this is an ongoing situation that is likely to get worse. It is high time that people started looking at the bigger picture and where higher education is actually going.

If what you want is ‘McEducation’ with zero hours, sub-standard academics delivering ‘bite size’ lectures online and sky-high fees then so be it. But if you really care, like I do, about the future of higher education then this strike needs to be supported.

It will be the next generation of students that will suffer if we allow the steady chipping away of pay and conditions for academics. A cut to academics’ pensions is an attack on their security and their pay, as it means a larger slice of their wage needs to be saved for their retirement. Staff at sixty-one universities are coming out on strike because the average lecturer who will lose a chunk of their pension when they retire, under the proposed changes. This could mean a £10,000 cut for the average lecturer in their Universities Superannuation Scheme (USS) pensions, say the University and College Union (UCU); the union of the striking academics. The UCU also calculates that since 2009 the average pay of university lecturers has declined in real terms by 15 to 20%. While the pay for university vice-chancellors, those backing the decision to cut pensions, has gone through the roof.

Lecturers, with the help of support staff, are educating our next generation but if you want this current cohort of students to come back and be the next generation of lecturers, you need to provide decent conditions of employment. Say you have someone who wants to teach computer science, and the University of Salford has a position on offer but when you look at the pay, pension and working conditions you see that all are better in industry. Why would you come to a university? The University of Salford wants to attract people from industry and yet every attack on pay, pensions and working conditions is making it a very unattractive move for them.

Jan Bradbury who is a team leader within technical services at the University of Salford says the strike has been called for fourteen days, spread over the next four weeks. So, there is an awful lot of people who are taking a big hit on this one in terms of salaries. Bradbury, who was on the picket lines on the first day of the strike, says:

“Yes you lose pay, all fourteen days’ pay, but it’s important to stand up. A lot of people who are on strike are not actually in the USS pension, because you have to be on a certain grade to be in a USS pension. There are other staff, professional services staff, who are in local government pensions and… they feel that if the USS pension is going to be effected then they may go after the local government pensions scheme. No pension is safe really, so its solidarity.”

Bradbury is concerned that there has been a break down in dialogue between the UCU and the Universities Superannuation Scheme (USS) the organisation in charge of the pension fund. But she hopes the planned 14 days of action will get them back to the negotiation table, saying:

“The UCU will talk at any point, all USS have to do is to name the day, name the hour, name the venue and we will be there to talk and USS are not doing it. Hopefully all this demonstrating at 61 universities, who are taking part [will change that]. As far as I know…no date has been set to get around the table and start discussing it, but I think people feel really strongly about this. For every University that voted to come out and strike, I think it was over 90%-that voted to come out.”

As well as getting overwhelming support from university staff the industrial action is also indirectly applying pressure on university management to sit down at the negotiating table. Nearly 100,000 students have signed a petition demanding financial compensation for each class cancelled due to the lecturers’ strike. Smaller petitions at universities across the country are asking for reimbursement for cancelled lectures, one targeted at the University of York is demanding £300 for every lecture lost.

We students have every right to request this money back from our very high tuition fees of £9,250 per year, which are currently being reviewed due to concern over excessive debts piled up while studying. The USS should consider the effects this dispute is having on employees and the students that they teach, by coming to the negotiating table to settle it.

Bradbury expressed her disappointment that students education may be affected by the action, but was buoyed by the support from the students saying:

“I think it will affect students and we are sorry about that, we don’t want to. Lecturers want to teach, nobody wants to go on strike but it has got to this point and the National Union of Students are supporting UCU in their actions, which is absolutely brilliant. There are lots of Universities where Students are actually on the picket line as well which is absolutely great.”

The University of Salford’s press office was contacted to enquire if they had any information from the strikers’ employers. However, I was advised that they won’t comment on the industrial action being taken by the lecturers.

To attract good lecturers you have to reward them fairly. Pensions are a deferred pay. You pay into your pension pot and you want that out when you retire, that’s what keeps you going. If it’s going to be cut, cut and cut again, then why are they going to do it?

Ultimately students come to University because they want to get a Degree. And it is the educators at University who enable us to achieve that goal. It’s the lecturers, the hard-working lecturers, and professional service staff who support them, that help us graduate and they just want to be rewarded adequately.

Alan P Whittaker – is a student at the University of Salford