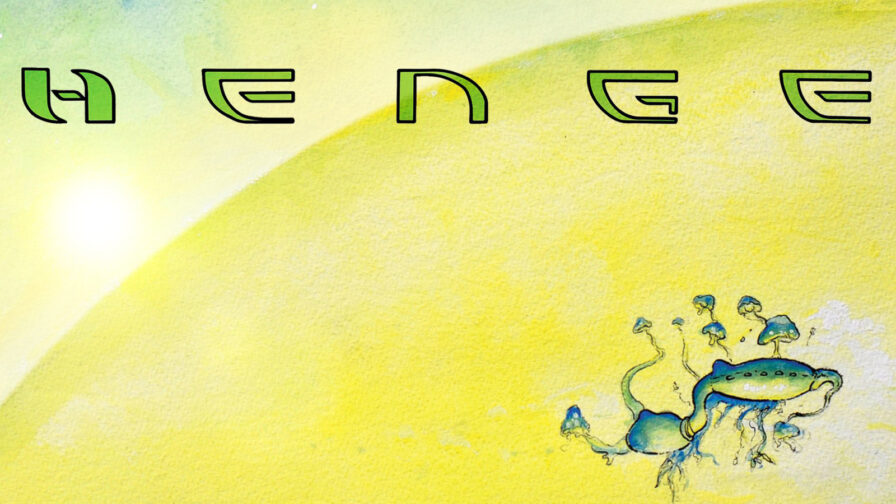 Fresh on the heels of a full summer of festival appearances, local Manchester band Henge release their first album, Attention Earth! How does their frenetic and psychedelic cosmic dross fare when transported from sweaty, heaving festival tents to more placid domestic situations?

The psilocybin-spiced mothership Mushroom One shimmers into existence, teleporting in from the frontier reaches of the cosmos. Dreamily reverbed guitars and ominously prophetic messages of the future abound, as the psychedelic spores of infectious rhythms take hold and set the scene for the rest of the album.

Cursory introductions completed, Moon waxes into view, creating an ever-building drama and tension. A sense of anticipation and urgency is carried along by layers upon layers of rising synth work, ultimately leading to resolution and an almost lunatic crescendo, the track deftly channelling the chaos and atmosphere of Jeff Wayne’s musical version of War of the Worlds. Ullla!

Then it is time for Indigo Dust, the single released as a precursor to the full album release. A lyrically ambiguous paean to the joys of creating art, this is the album’s love song; a space ballad of devotion and joy. Analogue synth lines flex elegantly as hypnotically rhythmic drums sharply snap, with electronic machinery burbling away in the background.

“And with every stroke I’m picking up such an incredible

The reassuringly familiar In Praise of Water is next up, in digitally distilled and crystal-clear form. With all impurities removed, the technoid manic-miner bleeps and sliding square-wave bass deliver the track’s message in tonally perfect focus. Henge’s trademark change of pace towards the end elicits the feeling of teetering on the edge of a descent into the abyss, but somehow returning back from the brink. This is the central message of cosmic dross; a musical metaphor to teach humanity the errors of its ways before it’s too late.

Then, in what is my clear highlight of the album, Henge seem to have awoken the Monolith from 2001: A Space Odyssey to deliver its message to the uncontrolled experiment that is humanity. Translated hieroglyphics are accompanied by middle eastern sounding instruments and vibes, the lyrics challenging us to pay attention to our activities and potential as humans:

“You have the propensity for pure machine telepathy”

Warning us of the perils of complacency:

“You have the technology, by now you should be automatic”

Machine Landscape is the calm before the storm; a brief interlude envisaging relaxed moments dropping coins into arcade machines at the end of the pier, with vintage automata playing melodic electronic piano as a wistful robotic vocoder voice washes over you.

Heralded in by a deceptively simple but infectious Kalimba melody, the album closes out as Henge’s festival gigs do, with the emphatic anthem Demilitarise. This clarion call to unarm is, entirely appropriately, the least ‘produced’ sounding track on the album. If not completely recorded from a gig, it certainly feels like elements of it could have been; this gives it the energy and power the track deserves, even demands.

All too soon, the album and experience is over, the journey swift and enjoyable. With its changes of pace and energy, you come out of it feeling like you’ve had a workout; a high intensity interval workout for the feet, the mind and the soul. The combination of different musical styles and elements fuse well, and you find yourself with many an ear worm as the tracks burrow into your mind and take root.

At a shade over 39 minutes, the album is short, and leaves you wanting to experience more Henge. It occurs to me that this album would fit snugly on to one side of a C90 cassette (perhaps a Space Cassette?). If the album is one side of the cassette, then perhaps seeing Henge live would be the other? To this end, Henge will be spreading their message of cosmic dross far and wide by touring the UK throughout November into December. They end on a double bill at Gorilla, Manchester on Dec 8, including a family-friendly matinee gig.

Attention Earth! is available to listen to and buy now from all the usual suspects