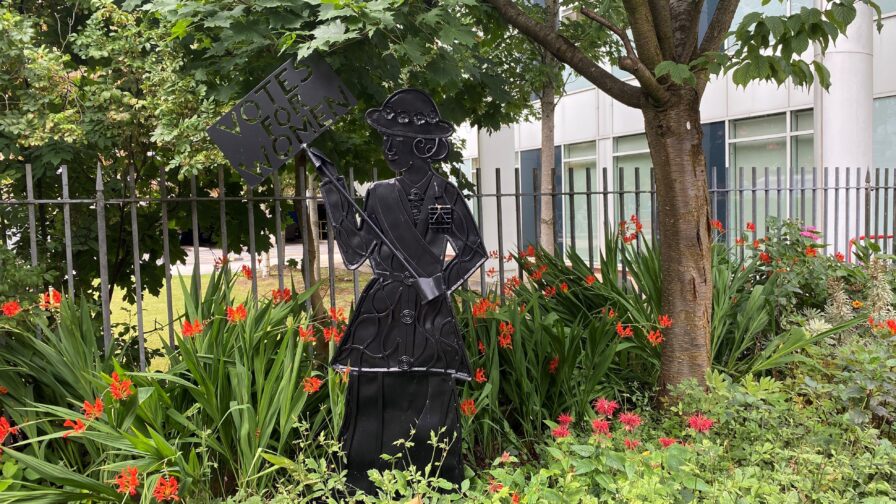 New exhibition to celebrate the lives of the Pankhurst family opens to the public on the 29 August, at The Pankhurst Centre.

Alexandria Slater takes a preview tour round the exhibition and is blown away by its revelations.

Women’s influential deeds and campaigns in Manchester have shaped the social and political fabric of this country and have resonated globally. On a mission to celebrate and continue the cycle of radical feminism, the Pankhurst Centre opens its new exhibition, At Home With The Pankhurst Family, to shed light on the past battles for equality and the patriarchal issues which continue to oppress disadvantaged women to this day.

On a journey back into the early twentieth century of radical and working-class Manchester, the 142 magic bus carried me down Oxford Road on a typically drizzly Sunday morning and dropped me off a minute walk away from 62 Nelson Street, where an ornate, Edwardian house, stands proud amongst the Royal Infirmary surroundings. From the triumphs of the Suffragette movement to the tragedies of their personal lives, beyond the red brick exterior of number 62, lay the legacy of the Pankhurst family’s lives.

I was greeted by a friendly group of women volunteering to prepare the Pankhurst Centre for the opening of their new exhibition on the Pankhurst family, which is open to the public from 29 August. One of those women was Ruth Colton, heritage manager of the Pankhurst Centre, who warmly welcomed me through the forest green front door before briefing me on the history of the country’s only museum dedicated to female suffrage and explaining the centre’s goals:

“Our aim is to give visitors the chance to discover more about the family behind the Pankhurst name and how they became both change-makers and historical icons. The exhibition’s striking boldness reflects the strength behind the campaigning of the suffragettes, and yet we are also reminded that this began from the setting of a family home.”

Alongside it’s role as a museum The Pankhurst Centre is partnered with a group of organisations supporting victims of domestic abuse within the community. The right for women to vote was achieved in 1918, and since then opportunities for middle and upper class white women have increased. But, oppression of BAME and lower working-class women still blights the lives of many.

Women’s aid reported an estimated 1.6 million women across England and Wales experienced domestic abuse in the year up to March 2019, and research shows, women facing destitution or risk to immigration status find it harder to seek help when they suffer domestic abuse than women from more privileged backgrounds.

Despite the great strides made by previous campaigns, inequaility for women is still a systemic issue that needs tackling with the same passion that fuelled the suffragette’s militant tactics, riots and hunger strikes (which government tried to counter with the ‘Cat and Mouse’ act) to achieve women’s liberation.

The Pankhurst Centre is the birthplace of the Women’s Social and Political Union (WSPU), Emmeline Pankhurst was an influential founder of this organisation in 1903 that fought a long and hard campaign that was ultimately successful in pressurising government into giving women the right to vote in public elections, in 1918. Yet despite the history made within the walls of the Pankhurst’s home, an application to demolish the derelict and abandoned building was received in 1978. Echoing the inherent strength and resilience of the Suffragette movement, women fought against the demolition and female workers restored the building into the awe-inspiring centre that we can stand in today. The Pankhurst Centre states:

“The exhibition enables visitors to get to know the people behind the iconic Pankhurst name; their lives, influences, tragedies, resourcefulness and the factors that turned them into the campaigners that they became. This includes how they used their skills, notably Sylvia as an artist, and how their campaigning meant that their own aspirations were sometimes left unfulfilled, Adela’s career dreams of being a teacher put to one side to join her mother and sisters in their work to achieve the enfranchisement of women.  It also includes looking at the influences from both within the family and the radical city of Manchester in which they lived.”

The exhibition, designed by Mather & Co, consists of three main rooms, all as immersive and captivating as each other. Unlike a grandiose museum where exhibits of flora and fauna may tell the broad story of evolution, room one at the Pankhurst exhibition consisted of items that revealed minute details of their personal lives, such as Emmeline’s job as a Registrar of Births and Deaths rather than their protests, which brought life and relatability to the Pankhurst’s.

The tragic loss of Emmeline’s husband, Richard Pankhurst, in 1898 caused the family financial hardship. Learning this triggered a moment of realisation, which shattered my naive and romanticised perception of the Pankhurst family’s lives. They were working women who, while carrying the weight of women’s issues and participating in dangerous hunger strikes and militant tactics, experienced personal suffering too.

As I ponder the intricacies of their family dynamic, Ruth takes me through room two, which has visceral audiovisual films playing featuring sounds of jeers and chants that played over graphics of quotes from Winston Churchill, politicians and members of the Anti-suffrage movement who ridiculed the WSPU, labelling them as “silly girls”. Black and white images of protests on Stevenson Square, showing the ruthless brutality enforced by the police in attempts to silence women fighting for liberation, are projected onto two walls simultaneously.

Now fully immersed within the extreme reality of the movement, Ruth walks me into a less intense yet equally, if not more, powerful and significant, room. It is furnished with a mahogany dining table, fireplace and wooden chairs and the walls are covered with a daffodil yellow floral wallpaper – a traditional domestic setting at first glance. However, the Edwardian parlour was not just a place for food and dinner-table talk. The first Suffragette meeting for plotting and planning took place within the same four walls and was a refuge for suffragettes like Annie Kennedy, who stayed with the Pankhurst’s once she was released from prison. Upon closer inspection of the objects and the historical insight provided by Ruth, the room turns from a standard dining room to a vessel of radical political change.

The hairs on my arms began to stand, and a desire to advocate for women’s issues brewed inside me as I stood amongst the room infused with the memories of the radical ideas that changed the course of history.

But the pessimistic side of me couldn’t ignore the frustration also residing within me. I had learned more about the nuances of the Pankhursts in the first half hour of the tour, than I had during the five years studying British history in high school. And the disappointing reality that the Pankhurst Centre is the country’s only museum dedicated to women’s suffrage, despite the monumental impact they made, makes it difficult to believe that justice for women is at the forefront of the country’s priorities today.

The exhibition’s ability to evoke such profound thoughts through minor subtle objects is admirable, and perhaps the favourite aspect of my visit to The Pankhurst Centre. The beauty of radical feminism also lies in its simplicity which is conveyed through the “pick me up” boxes arranged around the parlour. Mather & Co designed these cuboid shaped objects as part of the dining room’s decor, to be interacted with by visitors. Representing the feminine items used by suffragettes for protest, each “pick me up” box featured it’s own image of a handbag, or sewing machine.

As if feminism and femininity are mutually exclusive, a performative and harmful narrative held by some modern-day liberal feminists implies that femininity is a barrier to personal and career success rather than an enhancement.

Female empowerment is seen by some as abandoning any form of femininity to disassociate from obnoxious and unintelligent stereotypes placed on overtly feminine female characters in film and television. In the employment sector female empowerment is packaged as claiming a seat at the table with the men and becoming the next “girl boss” CEO of a company.

“Why do you think handbags were useful to suffragettes?” was printed on the side of one of the “pick me up” objects.

These feminine objects represent the potential we have in changing society. Ruth explained that the suffragettes used these everyday accessories in riots. The idea is that the most extreme radical changes have come from the simplest and most domestic settings and objects. Like the handbags the suffragettes used to carry rocks and hammers with, and the sewing machines used to create campaign banners and sashes, women should weaponise the skills and traits we carry in our activism. Whether that be our ability to paint, sew, write, or debate. And like the suffragettes, women can fight against the system which upholds injustice to this day – without compromising our femininity. Gail Heath, CEO of the Pankhurst Centre, said, “the history and heritage of the place will help us make change now.”

As Ruth led me into the Pankhurst Centre Garden, blooming with the classic suffragette colours of green, white and purple, she shared the future plans for a school programme set to start on 22 September, Christabel Pankhurst’s birthday. The influence of the Pankhurst family has carried through for over a century, and the Pankhurst committee is committed to instilling the same passion and motivation into our next generations. Ruth adds:

“It’s so important that children learn about the movement and the importance of the suffragettes because whilst we have achieved a lot for women, there’s still a very long way to go.”

Public bookings for the Pankhurst Centre can be made now for slots from Sunday 29 August.Opening hours will be Thursday and Sunday, 11.00am to 4.00pm.

Entry will be FREE with a suggested donation of £5. For further information and to book tickets – click here

Featured image and all in article images (unless otherwise stated): Alexandria Slater