Domestic abuse led to life on the streets for Julie 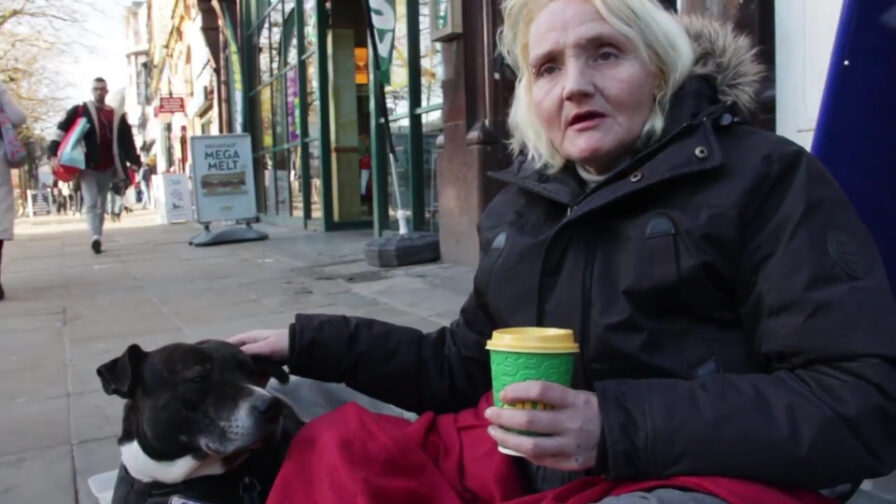 Julie is 44 years old and has been living on the streets of Manchester for seven years. Sat at her usual spot with her dog Marley, collecting money for a £25 B&B, Julie appears just the right mix of warm hearted and thick skinned that’s needed to survive on the streets. The odd passerby from the sea of legs that can be seen from her level let on and smile at her. Some stop for a chat, others give her change and food, unclear whether they are friends or strangers. Despite the pain she suffers from arthritis, Julie seems active and friendly, engaged and attentive, but ultimately, restless. She begins to talk about her old life as a chef and how all she wants is to return to work:

“I started helping out at a restaurant near Manchester Cathedral. Then after a few years I starting helping out at all the restaurants around town and became a chef. I used to do the nights, getting all my qualifications.”

Most people work to keep a roof over their heads. For Julie, the idea of a home is simply a route back to working at the job she loved, as a chef:

“I miss it so much now. I’m bored, all I want is my job back. But you can’t become a chef if you’re on the streets because you’re dirty, your hands are dirty. And I’ve got to get my teeth done now. Who’s going to employ you when you’ve got no teeth? It’s been ages since i’ve cooked anything, it’s been years. But I love it, me. I can spend all day in the kitchen.”

Julie’s future as a chef seemed bright, and while pursuing her career she met the man she was going to marry, who used to pick her up from work when they first met. But then Julie explained how her career, along with her friends and family, were taken away from her after she got married:

“When I first met my husband he was brilliant, but as soon I married him he turned on me. He took my job off me and everything. He took all my family away, I couldn’t see my twin sister. He took everything away from me.

“As soon as we got married, the next day, he turned around when I woke up and said ‘I own you now. You’ll do as you’re told.’ And that was it – my job went down, he stopped me going out to work, stopped me seeing my family. Beat me. ‘You clean this house, you do as you’re told’. That was it.

When Julie finally found the strength to leave her husband, she quickly realised that she couldn’t stay in the area she was from. The streets of Manchester city centre ended up being the place where Julie managed to find sanctuary from her husband:

“I left him. I’d been leaving him for a few years but he used to come and find me if I stayed with family and friends. So it took me staying on the streets for him to not find me, and he hasn’t found me yet.”

Julie has asked Manchester City Council for help, but for years they advised that she could only seek help in the borough she was born in, which isn’t an option for Julie. “Manchester’s my home, it’s been my home for more than twenty odd years. So I want to know why they wouldn’t give me a home just because I was born in Tameside.”

Though sleeping rough proved an effective measure to escape a violent home, it became clear that Julie had simply traded a one form of abuse for another, when she was sexually assaulted by a man she trusted:

“I thought he was my friend, like you do. Cuddled down for the night and then he jumped on me and tried to rape me. Eventually I told the police and they found out that he had record and was known for it. They put him in jail on remand. When I was telling my story I kept throwing up, it took my nearly all day to do the interview. And then when it came to it I said I can’t go through it again, I just can’t. It made me ill telling it once.”

Julie argues that more needs to be done to ensure the safety of women on the streets:

“The council need to protect the women. We want to be treated equal, but at the end of the day when it comes to sleeping rough, who’s the one that’s going to get attacked first? The women.”

Julie’s claim is backed up by studies conducted by both Crisis and Westminster Homeless Action Together, which found a higher proportion of women reported experiencing violence on the streets than men in 2016. “I hate being out here at night after everything that’s happened to me”. The experience Julie describes of law enforcement has been at best dismissive, and at worst disdainful:

“You don’t get listened to. Especially if you want to report a crime. And when the important people come into town, all the police come in and move us out. It happened last year. If we came into town again after they’d moved us, they’d ban us from town for 24 hours, and if we did it again we’d get locked up. So that when people come it looks like we don’t have homeless and it’s all clean – well it’s not like that.”

Despite all of her experiences, Julie still manages to stay upbeat:

Things may be looking up for Julie, as she has recently been offered help with accommodation by Manchester City Council. But as Julie points out, it took a set of truly dire circumstances for her to become enough of a concern to help:

“I ended up getting raped and robbed before they finally said they’d help me. After seven years.”

After such a long time on the streets, Julie has a long road back to her old life and independence. “They said if I get a home, I can claim benefits – I don’t even know how you do that now. I was 18 years old last time I did that.”

But when Julie spoke about where she sees herself in a year’s time, there was just one goal on her mind. “All I want – I just want my home, so I can go back to work. Get my home, get my furniture, get my teeth done and go back to work.”

If you would like to find help for people who are homeless, and see what you can do to help, check out Street Support Network: www.streetsupport.net