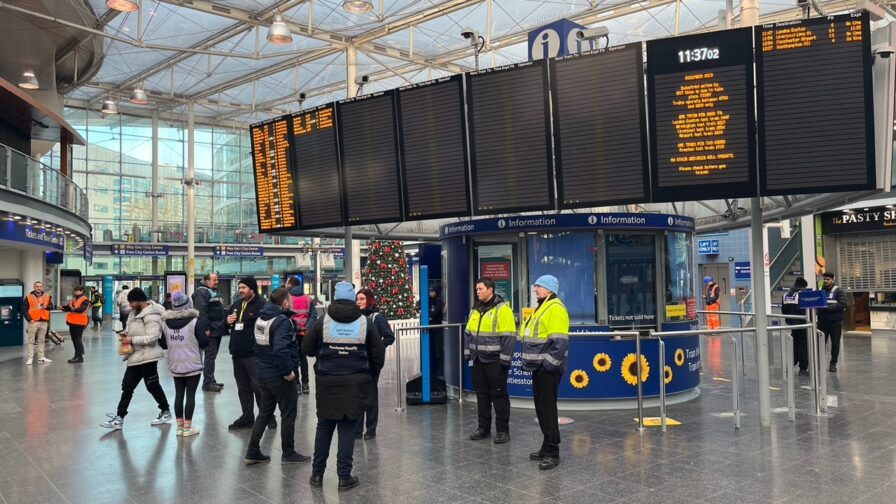 The Meteor visited striking rail workers at Manchester’s Piccadilly Station on Friday 16 December to find out why the employees are so determined to win their struggle.

On a bitterly cold morning, a surprisingly upbeat crowd of rail workers wrapped up against the sub-zero temperatures, and waved flags and banners on Piccadilly’s Station approach as part of the ongoing dispute with the rail companies. Michelle, a rail worker of over thirty years experience, expressed her reasons for joining the picket line.

“Everybody goes on about the train drivers pay being about £45,000 to £55,000, my rate of pay is £23,600. Somebody fought for my working conditions, such as decent time off to spend with my family. The new proposed working conditions are about withdrawing all that, and making me do more roles that I am currently not trained to do, for the same or even less pay.”

It is clear that although the cost of living crisis is driving the dispute, with an  attempt to keep workers pay in line with current inflationary pressures, experienced rail workers like Michelle are also concerned about the future work conditions for new rail employees, the level of train services and the safety of the travellers.

“Conductors often have to get up at 3am to start the trains off. The railways are a 24/7 job.”

“They want to introduce flexi-work and longer shift hours. There are a lot of young faces out there and we are fighting so they can have the same career as what I’ve had. It is maybe not the best pay or the best hours but it was a job that I knew I was secure in. These cuts will decimate safety on the railways, the safety will be gone. Anybody who travels on the trains will be taking their own safety in their own hands. To have just one person at the front of the train isn’t enough. The safety of the train should be with a trained railway guard [conductor].”

The striking workers stress that they’re not against modernisation in general, with changes such as ticketless travel being introduced, but the current proposals are considered a change too far. The rail workers understand that the public may not fully comprehend the implications and motivations of the new proposals as they are outside the industry. Everyone on the picket line that The Meteor spoke to expressed their regret at taking strike action, for the inconvenience they are causing passengers as well as their own loss of earnings. Most rail workers face losing at least eight days wages with the current and planned walkouts.

Clayton Clive, the Branch secretary for RMT Manchester South, explains why he thinks the ideology of the government is leading to the dispute.

“The main points of the dispute are that we have not had a pay rise for about three years and workers need a pay rise that keeps up with inflation or otherwise it’s a pay cut. Alongside that they are using the excuse of the pandemic to cut staffing levels on the railway. All the costs of the railways are fixed apart from the staff. That means staff are the only cost they can cut. The government wants to reduce subsidy to the rail industry by cutting the railway staff. For decades the companies have relied on overtime due to low staffing levels, so we cant have a full service even when it’s not a strike day.”

Clive, in common with all those attending the picket in Manchester, stresses how these cuts will lead to a compromised safety level on the region and nation’s railways.

“Network Rail wants to cut about 2,000 maintenance staff and also reduce onboard jobs, removing conductors from trains across the country. They want to cut catering services, close booking offices and remove station staff. This combination is toxic and we know this as the Association of British Commuters published a report a few weeks ago showing that in the regions in the south, where they have introduced these changes, disabled passengers are unable to use about 11 percent of the train services due to unstaffed stations.”

The dispute is clearly beyond just the matter of pay levels as the branch secretary concludes.

“It is obviously a time when we need to invest in the railway. Something in the region of every pound invested brings four to five pounds back to the economy. We face a climate crisis. It’s time to invest in the green industry of the railway network. It is not the time to be attacking it for the sake of private profit. The Treasury and the Department for Transport have a very London-centric view of the railway. The commuters may not be all coming back down in London but in Manchester and the northern regions you see the trains are full.”

With the latest figures showing train travel nationally returned to 80.3% of its pre-pandemic levels, (with 5 strike days, and the associated disruption, included in these figures), train travel looks set to rebound. It’s now a question for the Manchester region and the country as to what level of service and safety it wants on the tracks.