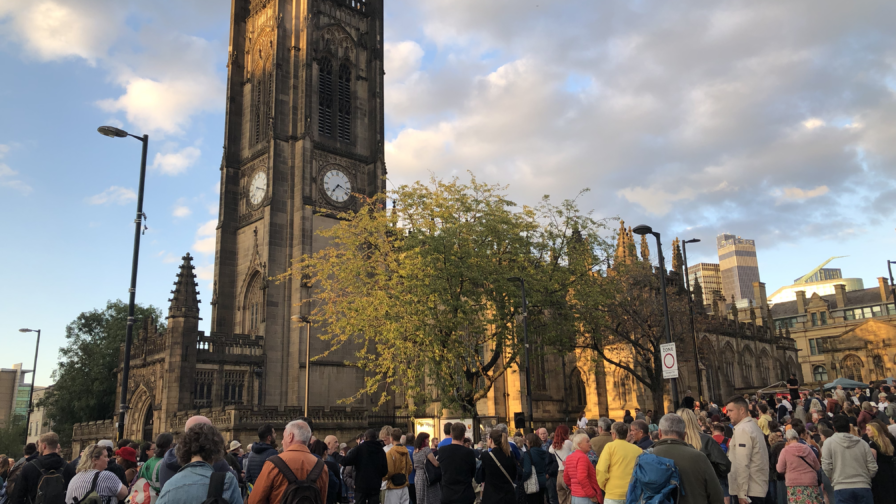 Enough Is Enough campaign launches in Manchester with thousands joining together to hear rousing speeches from union leaders, MPs and community groups.

Over one thousand people gathered in Manchester Cathedral, with an estimated 5000 outside, to launch Manchester’s Enough is Enough campaign.

Enough is Enough is a campaign to fight the cost-of-living crisis which has gained over 500,000 signatures, and whose supporters include Mayor of Greater Manchester Andy Burnham who spoke at the rally and called for pay cuts for the highest earners.

A recent poll by Survation found the vast majority of people agree with the campaign’s demands of capping energy bills (84%), raising pay (76%), creating decent homes for all (73%), ending food poverty (83%) and taxing the rich (72%).

An attendee of the event, Stuart Graham, said: “it is getting to a point where something has to change, and it’s urgent. I think the possibilities of rioting on the streets are getting more likely.”

Shannon Thompson added: “It’s encouraging to see so many people that don’t even have tickets, let alone people that have managed to get them.”

There was a palpable energy around the Cathedral as people gathered to show support for the campaign and vent their frustration with the government’s lack of response to the cost-of-living crisis.

The most rapturous applause of the evening came during Eddie Dempsey’s empowering reminder of the collective strength and unity of the working class which was greeted by a standing ovation.

“We cannot be distracted by people who divide us. We cannot be distracted by people who make you feel like you don’t have any power. You do. If the rich and powerful vanish tomorrow the trains would run, the buses would run, the hospitals would still look after the sick, but if we don’t get out of bed in the morning it all stops. We have got power. Us.”

Calls of solidarity with those on strike up and down the country were greeted with rapturous applause. The Openreach workers, barristers, postal workers, rail workers, refuse workers and bus drivers were all showered with support. Chair of Acorn Manchester Jake Johnson gave thanks: “You’ve spent the summer having each others’ backs and showing the rest of us how we, when we act collectively, can use our power to take back from the greedy few.”

“You’ve shown how the working class wins,” he added, “and have generated the energy and hope that’s in this room tonight and all across the country.”

Other speakers included Maxine Looby and Jo Brady of the UCU, who have balloted to go on strike at Manchester College next Tuesday and Wednesday, Dave Ward of the CWU, actress and comedian Sophie Willan, UNISON President Andrea Egan and Labour MP Ian Byrne.

Throughout the speeches lay a common thread of remembering and being empowered by working class history. The campaign has gained the support of faith leaders and Rogers Govender, the Dean of Manchester Cathedral, opened his speech by sharing a chapter of the history of the Cathedral.

“In 1787 the Cathedral was perhaps as full as this, when Thomas Clarkson was rallying up in the north of England, campaigning for an end to the slave trade. It was great that Clarkson was able to gather people in the city, who in their day said, enough is enough to slavery. And we are repeating that here today.”

Local organisations 0161 Community, Cracking Good Food, Manchester Central Food Bank, Get It Done, ACORN and Greater Manchester Tenants Union unified under the Enough Is Enough campaign and had stalls outside the Cathedral, showing their support and talking to attendees of the rally.

Tracey Thorley from Cracking Good Food CIC echoes this sentiment of solidarity. “Sometimes you’ve got to put aside [differences] and respond to what the needs are. This is regardless of what affiliation you have, this is people who are actually needing support here and so that’s why we’re here, most passionately, to support people as we do in our everyday activities.”

Cracking Good Food is a social enterprise that goes into communities and teaches people how to cook good food from scratch.  “We know that the issue is just exacerbating, [we want to know] how and what we can do to support people.”

Matt Stallard from Manchester Central Food Bank shared some of the work they’re doing to help people through the cost of living crisis. “We’re asking people today what an anti-poverty community looks like to them and how the cost of living crisis is impacting them. We’re really interested in working with all the groups here today, but also people of Manchester and really have that big conversation as a city.”

Iona Taylor added: “What is important at this point in time is making sure that whilst we’re meeting people’s needs on a day-to-day basis, we’re also looking forward to a future where we can be imagining better for everybody.”

Get It Done shared the stall with Manchester Central Food Bank and engaged the campaign supporters through an activity called community mapping. Ella Marshall explains: “One of the things that we’re doing today is asking people what is it about the cost of living crisis that scares them the most or what they’re most worried about, trying to map out how the public is generally feeling, and also have a think about how we can all help each other in different ways.”

As the rally drew to a close the audience were advised the best way to help the campaign is to sign up and to join picket lines and trade unions. Head of communications at CWU, Chris Webb, ended the night with a rallying call to action. “We’re not gonna win it by sitting around tweeting. It’s gonna be bloody hard work so we need you all out of your seats, on to your feet and out on the streets. Enough is enough.”