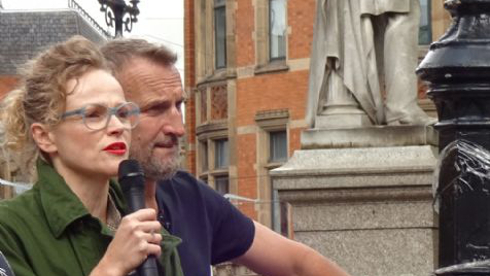 Hundreds of people gathered in Albert Square, Manchester, for the annual commemoration of the Peterloo Massacre.

Christopher Eccleston was loudly booed as he read the Riot Act from a window in Manchester Town Hall, while Maxine Peake relayed a message from Salford director Mike Leigh, who is currently making a film about the Massacre. Local people, including John Henshaw, read out the names and details of those who died at St Peter’s Field in 1819.

Here we report on today’s commemoration, to be followed by a second article on the political fall-out from Peterloo.

The Peterloo Memorial day began, on the 20 August, with contingents from all over Greater Manchester following the original path of those who marched to St Peter’s Field in 1819 to demand human rights, only to be met with violence from the authorities which left 18 dead in what has become known as the Peterloo Massacre.

A dozen walkers from Bolton arrived in Salford around 10am en route to the commemoration… “We’re following the original route because people marched in from all over, up to 15 miles away, to demand rights” explained George Hayes from Bolton Socialist Club, which has taken part in the marches for the past five years.

As the group headed off towards Manchester, more people joined them, including from Salford Trades Council, and by the time their contingent arrived in Albert Square in Manchester for the official commemoration, there were hundreds of people carrying the names of those who attended the original protest.

From an open window high up in Manchester Town Hall, Christopher Eccleston, playing the role of the Longsight based magistrate, Reverend Charles W Ethelstone, who is alleged to have read out the Riot Act at St Peter’s Field almost two hundred years ago, re-enacted the order to ‘disperse’ – only to be greeted with loud boos from those in the Square below.

Local people, including John Henshaw, George Borowski and Jacqui Carroll, then read out the names of those who died at the Peterloo Massacre, together with the circumstances of their deaths…

Martha Partington, from Eccles, pushed down steps and crushed under the weight of people… William Fildes, age two, knocked from his mother’s arms by cavalry and trampled to death under horses’ hooves…His story inspired Percy Shelley to write the Masque of Anarchy… ‘rise like lions…we are many, they are few…’

An extract of this famous political poem was recited, before a message was relayed by Maxine Peake from Salford director Mike Leigh who is currently making a feature film of Peterloo…

“Right now we are shooting the actual massacre sequence itself and after four months we complete the filming in two weeks time” he wrote “Putting this important piece of political history on the big screen has been a mammoth task for us all, and we only hope that our modest efforts will succeed in awakening the wider world to an event that becomes more relevant with every new episode of our crazy times…”

As they did this, Paul Fitzgerald, one of the founding members of the Peterloo Memorial Campaign, made a speech to help inspire them…

“People who say that Peterloo is not political are wrong because why else have people been so afraid of confronting the truth about it for the last two hundred years?” he asked “Peterloo demands that we ask some really tough questions about what is happening to democracy today.

“The democratic system around the world is under siege both in the UK and internationally” he added “It’s been diluted, corrupted and sometimes outright attacked… We need to reclaim democracy, celebrate it as we have done today, strengthen it and never forget its fundamentally radical nature.”
This was said against a background of political debate this week about the Memorial Campaign, and the fact that this morning over twenty homeless people were evicted from their shelter at the empty Cornerhouse building, in what they saw as an act of betrayal from Greater Manchester Labour Party Mayor, Andy Burnham, and Salford City Mayor, Paul Dennett, who is also GM housing lead…see follow up article – click here