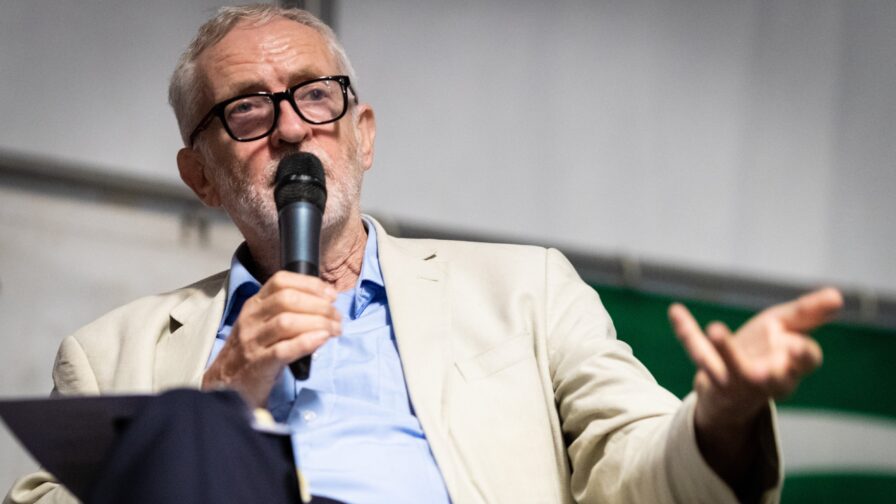 Jeremy Corbyn takes aim at the state of the current media landscape, and proposes solutions to improve it, with journalist and author Gary Younge.

Jeremy Corbyn called for greater democracy in how we run our media and promoted the values of  social justice, anti-racism,  peace and human rights as being the important ones in how we run our lives, at a packed event in Piccadilly Gardens, Manchester, opposing the Tory party conference.

The former leader of the Labour Party was interviewed at the Peoples Assembly Against Austerity gathering by journalist and author Gary Younge, who questioned Corbyn on his experiences with the media in the run up to and during his time as leader of the party.

Corbyn recalled that following his election as leader in 2015, he attended a cathedral ceremony that commemorated the 1940 Blitz. After it he went for some coffee and cake with supporters at a nearby Costa Coffee:

“This wasn’t to the liking of the Daily Mail, the Daily Express, the Daily Telegraph… who very rapidly announced that what I’d done was stolen food from veterans who were denied coffee and cake because I’ve been down eating it all.”

This negative pressure from the press exerted on the leader of the opposition was quantified by a report from the London School of Economics in 2016, which showed an overwhelming dominance of critical and antagonistic articles towards Corbyn from the major press titles.

The record-breaking Labour turnout to vote in the 2017 election, which denied Theresa May a majority government, led to an increase in the constant media pressure. Corbyn said it felt like the “house was under siege almost every single day” and on the rare full days he spent at home he felt like he was “actually imprisoned” in his own home.

Working sometimes 18 to 20 hour days constructing the manifesto with his team in the run up to the 2017 election, was a “very stressful” period, Corbyn says and suggests the media’s ire was due to the manifesto’s policies “on austerity, on foreign policy, and social justice, and redistribution of wealth and power, that totally freaked out the wealthy and the powerful. And you know what? They really love their tax havens and they don’t like people messing with their tax havens.”

Referring back to a MacTaggart Lecture he gave on the state of the media, Corbyn proposed that more “democracy in the running of  newspapers” was needed:

“We’re talking about the role of papers in asking questions. A newspaper should be asking the difficult questions of power, of authority, of big business. That means having editors that have got the ability to do that and the support of their team in doing so. Why can’t the editors of newspapers be elected by people within the newspaper itself?”

Corbyn stated his support for public service broadcasting but he did not want to see the BBC “becoming a mouthpiece of a Tory government” and was in favour of “democratising the BBC”.

The difference that split broadcast and print media organisations has also broken down, creating unhealthy levels of dominance and ownership within the media, by wealthy individuals and corporations, which Corbyn said made these media companies subject to, “self-censorship by those that work for those organisations, on the news values, what they’ll report, stories they’ll pursue, and it also brings with it a global thought process as well.”

The internet giants position in the media landscape, such as Google and Facebook, Corbyn described as “very, very powerful, and they do, and will shut down people that are difficult.”

To level the media playing field Corbyn proposed taxing the tech giants such as Google and Facebook, “in order to help support local independent media so that we do value our local newspapers, and that we also have the right of reply in our newspapers, and we limit the extent to which an individual owner can control both broadcast and print media.” The Peace and Justice project’s work to build a “new independent media landscape” was raised by Corbyn, who said he had been busy setting up News Clubs around the country, a place for people to meet and discuss what is in, and what is not in the news. Corbyn urged people to support independent news titles wherever possible to help establish new media, and join News Clubs to debate media issues.

The Peace and Justice project’s work to build a “new independent media landscape” was raised by Corbyn, who said he had been busy setting up News Clubs around the country, a place for people to meet and discuss what is in, and what is not in the news. Corbyn urged people to support independent news titles wherever possible to help establish new media, and join News Clubs to debate media issues.

Bin the billionaires: Save the media

Following the interview Corbyn and Younge were joined on stage for the “Bin the billionaires: Save the media” panel discussion by, Emma Jones from Hacked Off, actress Maxine Peake, and We Own It’s Johnbosco Nwogbo.

Hacked Off was set up in response to the phone-hacking scandal, which rocked the media world with its revelations of journalists hacking into the phones of dead school girl Milly Dowler’s family, as well as those of celebrities and royalty, alongside police bribery to obtain information for stories. The Leveson Inquiry was set up in response to the scandal and it found serious failings in the culture, practice, and the ethics of the mainstream media, and recommended that a new press regulator be set up, which happened in the form of IMPRESS. A major bone of contention for Jones is that part two of the Leveson Inquiry never went ahead.

“The promised public inquiry into criminal activity in the press and allegations of corruption between newspapers, the police and politicians. The inquiry which never happened because the government cancelled it. A government has never cancelled a public inquiry like that before”, Jones said.

“It’s a regulator apparently designed to give the illusion of accountability while in fact sheltering newspapers from any meaningful form of regulation… in seven years It hasn’t established a single investigation.

“In that time we’ve seen waves of Islamophobia, anti-migrant hatred, homophobia, transphobia, misogyny, fake news, racism, you see it all in the papers. And yet, according to IPSO none of this merits using their powers to investigate and redress.”

Hacked Off are a “proud member” of the Independent Media Association, Jones said: “This is an association of regulated ethical publications. By supporting these publications, you can support a more responsible media.”

The lack of diversity in the media was also a major problem in making progress, according to Jones who stated NCTJ figures showing 92% of journalists in the UK are white, and 89% of those are degree educated. She went on to say that “it’s probably less diverse than when I worked in newsrooms 20 years ago… certainly in terms of class.”

The lack of diversity in entertainment media was also an issue raised by Peake who said there was a “gatekeeper problem” with getting into the industry and summed up the issue by saying “you can’t be, what you can’t see”. Nwogbo also said he found the media terrain to be very “pale, male and stale” and dominated by “mouthpieces of those in power.”

Recounting his experience of reporting in the media during Corbyn’s rise and fall as leader of the Labour Party, Younge said he was surprised at the “chronic lack of curiosity” of sections of the press in trying to understand why Corbyn was gathering unheard of amounts of public support at events and meetings. Younge described what he saw as the stance of some publications:

“So then ‘Jeremy Corbyn is a witch from the 18th century, and if he drowns he’s not a witch, and if he floats then he’s a witch and we burn him anyway’, and there is no way for this person to win in the framework that you have set out, he will always be bad.”

Younge said that this anti-Corbyn bias in sections of the press wasn’t primarily due to orders being handed down from editors on high, it was much more sinister than that, and quoted Steve Biko to emphasise his point: “there is nothing as powerful in the hands of the oppressor than the mind of the oppressed.” Younge said:

“That’s how elitist that profession is. So if you have someone who was arguing about austerity, about cuts on the poor, about housing and the challenges of housing… these people have no experience of any of that. They operate in this foetid ecosystem where they talk to each other.

To counter the dominance of the traditional press Corbyn promoted more efficient use of social media as one of the keys to getting the message out there for people campaigning on a wide range of issues, and summed up the difference between those seeking positive social change or supporting the status quo, or worse, saying:

“The right, rely on ignorance, inaction and apathy. We rely on information, enthusiasm, and activism.”

Corbyn urged the audience who wanted to see a “different set of values running our lives, values of social justice, values of anti-racism, values of peace, values of human rights” to stay active all the time, through the defeats and the victories.

A News Club is in the process of being set up in Manchester, to get involved and find out more – click here