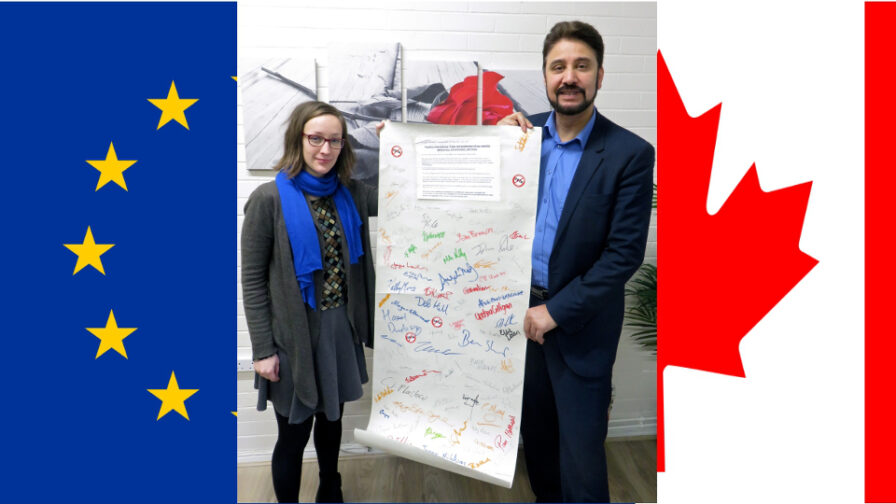 Manchester’s Afzal Khan, former Lord Mayor of the city and current MEP for the NW of England, has received thousands of messages asking him to reject the Comprehensive Economic and Trade Agreement (CETA). Khan told local campaigners last Friday he was still undecided on whether to vote for or against CETA, the controversial Canada/EU trade deal, when its fate will be decided on the 15 February in the European Parliament.

Local trade campaigners presented him with a giant letter (see feature image) signed by over 100 Mancunians insisting he and his colleagues follow the precautionary principle and vote against CETA. The document is a 1598 page corporate lawyer’s happy hunting ground which comes up for final take-it-or-leave-it approval in Strasbourg in a few days’ time.

CETA, like the more famous USA/EU Transatlantic Trade and Investment Partnership deal (TTIP), has been negotiated behind closed doors and now comes to the European Parliament for approval with no scope for amendment. It threatens to give transnational big business unfair powers and access to UK markets while stopping local and national government supporting local enterprises. Many see it as a backdoor for corporate coercion and interests which were frustrated by TTIP being stalled by widespread opposition,including over half a million UK citizens.

Even after Brexit the UK could be subject to a one-sided investment court system (ICS) for 20 years, allowing foreign companies to sue governments for regulating trade and possibly impacting future profits. Similar cases have been raised by companies using investor-state dispute settlements in other trade deals: tobacco companies have opposed anti-smoking campaigns, energy companies have fought the rejection of fracking applications and decisions to phase out nuclear powered electricity.

In his response to the campaigners Khan reflected on the give and take nature of European Parliament politics and the need to build relationships with others through compromise rather than simply point-scoring and following predetermined electoral result.

Laura Williams of Global Justice Manchester pointed out the flimsiness of promised benefits and that CETA and similar agreements without legal safeguards cannot be squared with Labour’s red lines and visions of protecting workers’ rights. Khan agreed progressive forces are feeling, “enough is enough” and there is a need to stand up to a corporate led agenda, looking at its implications, standards and effect on countries who are not part of such deals.

The situation is developing rapidly. Over the weekend Khan planned to study the issues before returning to Parliament where the UK Labour group will be debating its stance. Khan said:

“I will have an open mind and listen to contributions, and then make my decision.”

With its stance agreed Labour MEPs will meet with EU colleagues in the Socialists and Democrats group to agree their block’s position before the final vote expected on Wednesday 15 February. Khan concluded:

“If the S&D group come out against CETA it should be ‘dead in the water’; if not the chances are it will go through.”

As the meeting ended Khan picked up a big Stop CETA sticker and promised to hold it up at the vote in Strasbourg. He was assured NW constituents would be watching him!

Why do people care?

Peoples worries about CETA vary. Some are motivated by concerns about NHS privatisation and asset-stripping, others by worries about food standards and environmental safeguards; fracking is a local issue and Canadian businesses are big in unconventional fossil-fuel extraction. Some want governments and councils to be able to protect local businesses and jobs or worry about democratic accountability if legislators are scared of costly legal actions being brought against them.

For me it’s about all these but also about what sort of world I want my granddaughters to grow up in. I don’t want runaway climate change brought on by irresponsible laissez-faire systems. I want fairness and not a dictatorship by corporations. I want people’s needs to be prioritised over corporate greed. And I want a world where people in all nations get to set the rules, not have them imposed by a self-serving coterie of the ‘Haves’.

I’ve known Afzal Khan since he was Lord Mayor of Manchester. He has a history of supporting human rights, international peace and economic justice issues. Earlier in the week he met with the President of Azad Jammu and Kashmir, raising awareness of the growing unrest and violence there. Previously he has worked on interfaith dialogue and championed the push of Make Poverty History and Jubilee Debt Campaign.

I hope I can trust him and his colleagues to follow the precautionary principle- if you aren’t sure it’s safe the answer is NO! Any good parts in CETA can be picked up later, properly debated and amended by our representatives. If CETA is such a good thing, why did Liam Fox downgrade its promised scrutiny in Westminster and recently push it through via an afternoon committee meeting when attention was elsewhere in the drama of Brexit?

Mancunians have eight MEPs representing them but some seem not to acknowledge their constituents’ messages. Although the three NW Labour MEPs: Theresa Griffiin, Afzal Khan and Julie Ward have yet to decide on their stance, UKIP’s Paul Nuttall (currently campaigning to become MP for Stoke) and Louise Bours have publicly pledged to vote against CETA, as has former UKIP MEP and Mancunian Steven Woolfe. All three however have poor voting records and may benefit from congratulations on their voting stance and reminders to turn up and deliver.

All is to play for in the next few hours and campaigning organisations are pulling out all the stops with a planned Valentine’s Day twitter storm from Global Justice Now, and supporters and concerned members of the public asked to send their own emails and make direct telephone calls to give their representatives a clear mandate from the electorate to balance the massive weight of big-business lobbying that has been trying to determine their mindset.