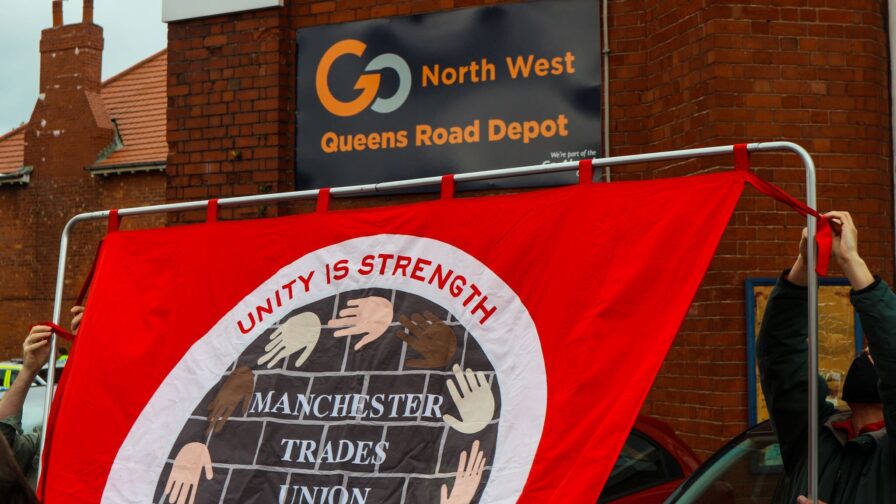 Bus drivers in Manchester employed by Go North West voted 82% in favour of taking industrial action against the bus company for its ‘fire and rehire’ practices, on a 77% turnout.

Unite, represents the drivers, stressed there was still time for Go North West bosses to return to the negotiating table.

Bus drivers employed by Go North West in Manchester have overwhelmingly voted for strike action in response to the company’s plans to ‘fire and rehire’ them on new working contracts, which the union representing the drivers describes as “slashing their pay and conditions”.

Drivers based at Queen Road Depot in north Manchester voted 82% in favour of strike action on a 77% turnout, with 18% voting against. Unite stressed that there is still time for Go North West bosses to return to the negotiating table and prevent the strike going ahead.

In a statement, Unite regional secretary Ritchie James said: “This is an excellent result and underlines the anger of our members who are being forced by Go North West to choose between their jobs and huge cuts in their pay and conditions.

“Unite is now providing Go North West with a very short window of opportunity, where it can tear up its fire and rehire plans and return to the negotiating table.

“If the company fails to grasp this opportunity then Unite will not hesitate in calling strike action.

“Strike action will inevitably cause huge disruption to Manchester commuters but I hope that it is understood this is entirely a result of Go North West cynically trying to use the Covid-19 pandemic as cover to hire and rehire workers and slashing their pay and conditions.

“Unite’s members have been forced into this position by the company which has waged an extremely aggressive and hostile campaign against its own workers.”

Go North West has been engaged in discussions with Unite since March last year to agree a way to stem £2 million in annual losses being incurred at Queen Road depot. The company has stated that the losses are due to “outdated working practices and customs” which “most of the bus industry moved on from years ago”. In August, Go North West offered drivers a one-off payment of £5,000 in return for altering the terms and conditions of their employment.

Dubbing this a “fire and rehire” policy, Unite said the changes would have reduced members’ wages by around £2,000 a year, meaning that they would be worse off within three years. Unite also argued that Go North West was only operating at a loss because Go Ahead Group, its parent company, had saddled it with debt. The drivers did not accept the offer.

Talks between Go North West and Unite recommenced in September to try and secure a deal. Go North West unilaterally withdrew from these in January, and began the “fire and rehire” process. Unite announced that it would ballot drivers on industrial action in response.

Nigel Featham, Managing Director of Go North West, said to The Meteor: “The claim that Go North West drivers are going to be £2,500 a year worse off following the issue of new  contracts is completely false. Our drivers, whose pay rates are already at the top of the scale for the region, are in fact to receive guaranteed pay increases in both April 2021 and April  2022.

“Go North West is losing in the region of £2 million per year due to old-fashioned working  methods.

“We’re bringing our operations up to the same level as our competitors – nothing more. No jobs are being cut and drivers’ guaranteed hours remain unaffected.

“We offered new contracts to each of our 479 drivers in late January.  As of last Friday last, 400-plus drivers (well over 80%) had voluntarily accepted.  We anticipate all drivers will have signed up by next week.

“Our sick pay scheme remains one of the best offered by any bus operator in the North West, and has additional Covid-related allowances on top.”

GNW said it was “now consulting each of its 485 drivers on a one-to-one basis with a view to them voluntarily accepting the new terms.”

Unite alleges that GNW had told bus drivers, in a hand delivered letter, that they had until 10:00 am on 16 February to accept the new terms, otherwise the new employment contract “if not accepted, it will be automatically withdrawn”. The Meteor asked Go North West to confirm that this was the case but the company had not responded by time of publication.

Unite regional officer Steve Davies also alleged that Go North West intends to spend £2.5 million on “reward” payments of £5,000 for bus drivers to accept the inferior terms and conditions, which Davies described as being exemplary of a “bullying management style.”

Pascale Robinson of Better Buses Greater Manchester, a group campaigning to bring the city-region’s buses back into greater public control under a franchise model, said:

“It would always be shocking to see a private bus company trying to fire and rehire fewer staff in worse conditions. But after the sacrifices and risks that our bus drivers have taken over the past year, it’s an absolute disgrace.

“It’s abundantly clear that Go Ahead doesn’t care about our communities. This is just the latest in a long list of cases showing that bus companies put profit above anything else. We must stop fire and rehire, and support drivers to get the respect they deserve.

“Andy Burnham should back our bus drivers－as passengers across Greater Manchester will －and fight to stop Go Ahead’s shocking plan. And he should commit to increasing drivers pay and conditions as part of a plan to bring buses into public control and finally get a network we can be proud of.”

Unite say they will be consulting with their bus driver members over 10 and 11 of February to decide on how best to proceed on questions such as the duration of the strike. The union stress that the door remains open to Go North West to rejoin the talks and prevent the strike going ahead.

This article was amended on 12th February 2021 to include the comment from Nigel Featham, Managing Director of Go North West.