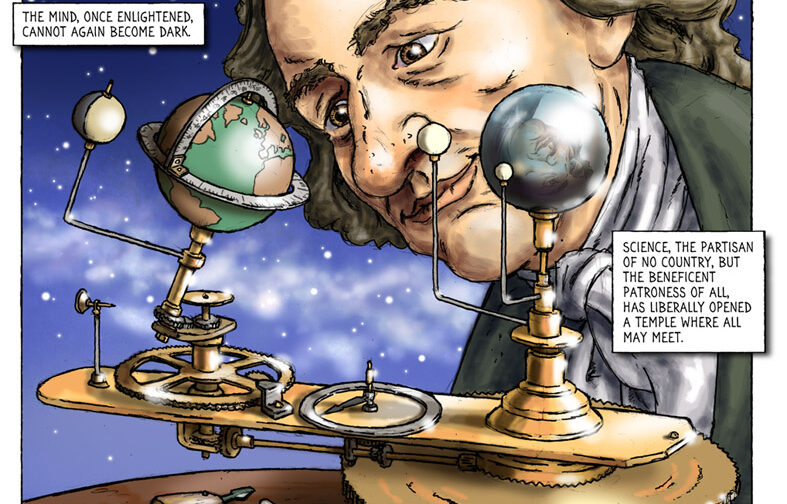 Thomas Paine was a radical human rights and political reform advocate whose work inspired the American Revolution and the formation of a democratic United States.

Artist Paul Fitzgerald is determined to re-tell the story of this forgotten hero whose work still has valid lessons to be learned in these stormy times for democracies worldwide. Kickstarter campaign aims to get this graphic novel project over the finish line. Paul answers The Meteor’s questions on why he wants to graphically re-tell Tom’s story to a new audience.

If the radical political reformer and American revolutionary Tom Paine were alive today he would probably be one of the biggest critics of the current state of US democracy. A dysfunctional system that allowed a narcissistic, bigoted, liar, bent on undermining democracy, to attain the most powerful position in the world. Trump has been deposed, but it was a close-run thing and the conditions that allowed his rise to power remain.

Even after his death in 1809, Thomas Paine continued to be a thorn in the side of those in power. His bones were unearthed from his grave in America by the radical William Cobbett and carried to the outskirts of Manchester and Salford, just after the Peterloo massacre had occurred in 1819. Fearing the presence of Paine’s remains would foment rebellion amongst a populace still raw from the massacre, troops prevented Cobbett from entering with the bones.

English-born Paine emigrated to America in 1774 and became the editor of the Pennsylvania Magazine. In the first edition the struggle for “American Liberty” was reported on and later editions took an abolitionist stance calling slavery an “outrage against Humanity and Justice.”

Through his strong and vocal stances on human rights and political reform he became a key figure in the American Revolution. His pamphlet Common Sense, which advocated for independence and an egalitarian government for the Thirteen Colonies, became the most widely read pamphlet during the American Revolutionary War (1775 – 1783).

His work reached an international audience and Paine’s The Rights of Man, which defended the French Revolution, so infuriated locals in Didsbury and Deangate, in 1793 that they carried out mock trials and executions, burning effigies of Paine in the process.

Paul Fitzgerald, an artist from Hulme in Manchester also known as Polyp, is the driving force behind this project to liberate Thomas Paine’s story from stuffy lectures on political and philosophical theory, to a wider contemporary audience, in the form of a graphic novel. His last critically acclaimed graphic retelling of a pivotal moment in British history, released in 2019, told the story of the Peterloo massacre using verbatim quotes taken from the historical records of the time.

The Tom Paine’s Bones graphic novel will also tell Tom’s story using facts and quotes recorded at the time he was alive and kicking against his colonial oppressors and fomenting revolution against King George III. Paul has already completed a good portion of the artwork for the project and has launched a Kickstarter campaign, to coincide with Tom’s birthday on 9 February, to get the project over the finish line and published.

The historically accurate text in Tom Paine’s Bones is mixed with beautifully drawn and inked “fantastical” images. The surreal feel of some of these images works well in contrast with the historical quotes and illustrate well the “blue-sky” thinking and ideas Paine was known for. Paul says:

“One of the major reasons I so admire Paine is I see him as a very early pioneer of what’s now called ‘the skeptics movement’, because of his love of science, his dedication to a rational, logical, evidence-based world view, and his hostility to mindless dogma and religious fundamentalism.”

Paul has spent the best part of the last year researching Paine’s life, which has given him a good understanding for Paine’s world view. From Paul’s description of the man it is clear to see that Trump’s denial of climate science, his irrational outbursts and propagation of conspiracy theories would have been anathema to Paine.

Trump held out in one hand a promise to the people he would drain the swamp and “make America great again”, while behind his back the other was opening the floodgates allowing the swamp to rise, threatening to drown America in corruption. His attempt on 6 January to get his supporters to storm the Capitol building and derail the democratic process, provoked by lies that election fraud was why he had lost, was straight out of the tyrant’s playbook.

Paine himself said. “The greatest tyrannies are always perpetrated in the name of the noblest causes”. Paine would not have shied away from calling out the tyranny of Trump.

The Meteor asked Paul Fitzgerald a few questions about Thomas Paine, his work and its relevance to todays troubled democracies across the globe:

Thomas Paine is lauded as one of the leading lights in creating an independent and democratic USA. What can be gained from re-telling his story now in these increasingly turbulent times?

I think democracy is something we can easily fall into the habit of taking for granted, or even treating with contempt: ‘They’re all the same!’ ‘Voting changes nothing!’ and so on, which I think is a profound, cynical and lazy mistake to make (I’ve been there!). So, like my previous graphic novel “Peterloo”, I want this one to remind folk of the enormous struggle that went into what was a revolutionary and radical concept of political equality, and to view it through fresh eyes.

What would Thomas Paine think of the state of democracy in the USA at this present time, what would he say to Trump and his supporters?

As he said when it looked like the rebels he fought with were going to lose the war of independence- “These are the times that try men’s souls … Tyranny, like hell, is not easily conquered; yet we have this consolation with us, that the harder the conflict, the more glorious the triumph. What we obtain too cheap, we esteem too lightly: it is dearness only that gives everything its value.”
Paine was a really committed rationalist, an enlightenment hero who promoted science and logic. I think he’d realise that at the root of the Trump phenomena is a serious denial of reality. Again, in his words- “To argue with a man who has renounced the use and authority of reason … is like administering medicine to the dead.”

Watching all the deluded “patriots” besieging the democratic buildings in the USA , Paine’s quote, “Those who abuse liberty when they possess it would abuse power could they obtain it” springs to mind.

It’s weird, though… many of the right wing, who know very little of his actual ideas, e.g. The Tea Party, seem to think he’s one of their own. He crosses political boundaries in a way I find really interesting. I hope the book may end up in their hands and open their eyes a bit… though I keep seeing Make America Great Again folk joining the social media pages and then rapidly departing when they clock who Paine really was!

Thomas Paine was born in Norfolk and emigrated to the British American colonies in 1774, but that did not completely break his ties and influence in Britain. What were Paine’s most important connections and influences in Britain and Manchester after he left these shores?

He never gave up on England, and longed to see it have its own democratic revolution, but it was often a dangerous place for him to be, with the government longing to execute him for sedition. They made huge efforts to suppress his writings, and they fretted endlessly about the cheap editions of his Rights of Man that were circulating among the working classes. You can see a clear path from his writings about liberty to the Peterloo reformers.

He eventually “returned” to England with some irony… bizarre radical William Cobbett went to America and dug up Paine’s bones, and brought them back to England in 1819, just after the Peterloo massacre. Troops prevented him from entering Salford and Manchester with them! Manchester was also the scene of several effigies of him being burnt, at the prompting of the establishment- but the book will explore some of the subversive and amusing twists of those events.

His The Age of Reason  was massively influential on English atheism and freethinking, and helped destroy the idea of the divine right of kings… ironic, given Paine himself was a Quaker-like believer: a “deist”. But he despised organized, revealed, establishment religion. “All national institutions of churches, whether Jewish, Christian, or Turkish, appear to me no other than human inventions set up to terrify and enslave mankind, and monopolize power and profit.” He also said “My mind is my own church

Would an independent and democratic USA have formed without Thomas Paine, how important was he to this struggle?

That’s a huge question! Do individuals change history, or does history have its own momentum that they simply ride? Certainly at the time people thought he did, and said that without his writings Washington would have wielded his sword in vain.

People of the era wrote in a staggeringly, almost comically verbose and elaborate style, and although Paine aspired to a revolutionary style of plain English, aimed at a working population, he can still be quite hard work! So I’d recommend folk begin with a digest of his quotes and ideas first. Many of these sound amazingly modern. I hope Tom Paine’s Bones acts as a great intro to the man.

I guess I’d recommend The Age of Reason, simply because of all the problems he addressed, the grip that dogmatic religion retains on the world is the unresolved one, currently doing the most damage, and his logical dismantling of it is still like a red hot knife. And he’s often very funny as well.

Paine was subject to a lot of unpleasant and untrue propaganda in the media of his day. What do you think he would have to say about the current state of the media, including the use of social media in organised campaigns to discredit people, spread lies and push conspiracy theories?

What was thrown at Paine in his era makes today’s propaganda look mild, and that’s going to be a core theme of the book. It became shockingly intense once he denounced mainstream religion, with many of his previous supporters jumping on board. It reached the level of saying he had sex with his cat!

I think he’d recognize ownership as a serious threat to media truthfulness, but given how he struggled to publish his own books in the face of censorship and intimidation, he’d love the internet, and he was a pioneer of “open source”, refusing to copyright or profit from his words… that being one of the reasons he died in poverty. He compared himself to a farmer of ideas giving his crops away for free.

Would Thomas Paine have approved of co-operative media organisations like The Meteor, with democracy as a core value?

Absolutely. Paine had a deep faith in the wisdom of people and in direct democracy.

What is the takeaway message you would like to leave with people about Thomas Paine?

The fact that he represented both a commitment to democracy and equality, but was also a hard nosed rationalist, is the side of him that I hope really strikes people and influences them, because I firmly believe political dogmas, including our own, desperately need a huge injection of critical thinking.

But also, in an era of echo-chambers, squeamish political conformity and entrenchment, his courage and determination to say things that he knew would alienate his fellow activists, shows an amazing loyalty to the truth, one that I hope really inspires people today.

Feature image and all in article images: Paul Fitzgerald