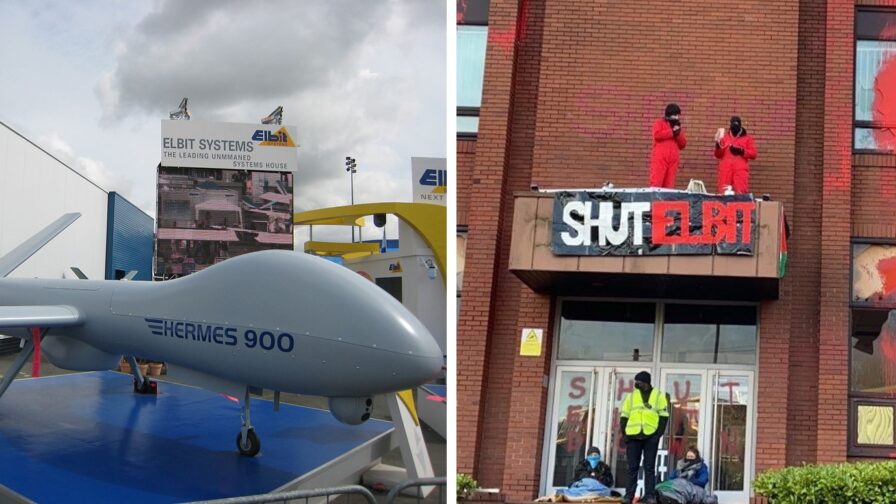 Elbit Systems, the controversial arms firm with a factory in Oldham that supplies equipment to the Israeli military, has received a contract of over £100 million from the government to supply ‘battlefield technology’ to UK armed forces.

Pro-Palestinian protestors occupied the factory on Monday calling for a stop to its trade in military equipment used in attacks that kill Palestinian civilians.

The Israeli arms firm Elbit Systems, which owns the Ferranti Technologies factory in Oldham, has struck a £102m deal with the Ministry of Defence to supply target identification systems to the British Army. This follows on from another £123m contract awarded to Elbit in January to provide the Royal Navy with training.

The two deals further cement the relationship of the UK government with Elbit systems, which is a major producer of arms for Israeli military forces, which are then used in ongoing attacks against Gaza and the West Bank that continue to kill and maim Palestinian civilians.

These deals do not sit well with the Foreign Office’s listing of Israel as a “human rights priority” country in its most recent Human Rights Report, which also pointed to “continued violations by the Israeli government of international human rights and international humanitarian law”, referring in main to abuses carried out in the occupied territories against Palestinians.

The Elbit owned factory in Oldham was jointly occupied by protestors from Palestine Action and Extinction Rebellion, who said they were taking the action because of the company’s role in the “destruction of people and planet” and that they would not “not accept an economy based on devastation, occupation and war.”

Chaining the sites gates shut, the activists climbed onto a ledge over an entrance to the factory, daubing red paint over some windows, smashing others and hanging a banner saying “SHUT ELBIT”. Activists also locked themselves to the factory gates and entrance doors, which resulted in workers arriving at the site turning away due to the blockade on entry. The occupation lasted the whole day in Oldham with the activists only being removed late in the evening. The action in Oldham occurred in concert with an occupation of another of Elbit’s subsidiaries, Instro Precision in Kent.

The latest £102m arms deal will see the Elbit Dismounted Joint Fires Integrator (DJFI) used by the British Army.  The DJFI uses thermal sight technology to enable soldiers to locate and identify targets on the battlefield. Once locked in the system, the target can then be attacked by other offensive weapons such as artillery, fighter aircraft or military drones.

The Ferranti Technology factory in Oldham specialises in avionic systems for fixed and rotary wing aircraft. One of their advertised products is a Wide Area Persistent Surveillance (SkEye WAPS) video surveillance system that can be fitted to “Unmanned Air Systems” AKA Unmanned Aerial Vehicles (UAV). Elbit’s subsidiary, UAV Engines Ltd in Shenstone, Staffordshire, exports UAV engines to Israel (used in Hermes 450), and also produces engines for the Watchkeeper, the UK’s main military drone which went into operation five years late and was limited to flying in certain weather conditions.

Elbit provides 85% of the drones used by the Israeli military. Their UAV products include the Hermes 450 and Hermes 900 drones. Engines from Shenstone power the Hermes 450, used in daily surveillance operations and attacks in Gaza. Human Rights Watch report that the Hermes drones were used to attack Gaza during Israel’s Operation Cast Lead in 2009. The report focuses on just six Israeli drone strikes which in total killed 29 civilians, including eight children. Amnesty International reported over the course of the conflict they recorded 48 civilian deaths from drone strikes, and they believed this was a conservative estimate. Operation Cast Lead killed between 1,166 and 1,417 Palestinians, with 13 Israeli deaths.

A confidential Israeli military police report leaked to The Intercept showed how the Israeli operators of a Hermes 450 were responsible for killing four Palestinian children, cousins aged 10-11, playing on a beach during the 2014 Operation Protective Edge. They killed one child with the first missile fired, and then fired a second missile which killed the remaining three.

The roof of the Ferranti Technology factory was previously occupied in 2019 by Manchester Palestine Action. Adie Mormech, a member of MPA, said during that occupation:

“We’re trying to keep this factory shut so they can’t make things which kill innocent civilians. We demand a two-way arms embargo between the UK and Israel so that no more death can be inflicted on the Palestinian people.”

Following the occupation of Elbit owned factories on Monday 1 February, Palestine Action co-founder Richard Goddard was arrested on 3 February for blackmail in relation to the direct action against Elbit Systems and held in custody in London. Both Goddard and co-founder Hudda Amori had their passports and other documents seized. The activists were eventually released by the police and Amori released a statement saying:

“The only thing we can assume this is about is [Palestine Action] demanding that companies do not associate with war criminals, and if they do we will take action. This is not blackmail. This is asking for companies to abide by International Law and Human Rights Conventions. This is just another extension of harassment by the police. We will not be deterred by police harassment; we will only grow stronger and call on everyone to join us in forcing war criminals out.”