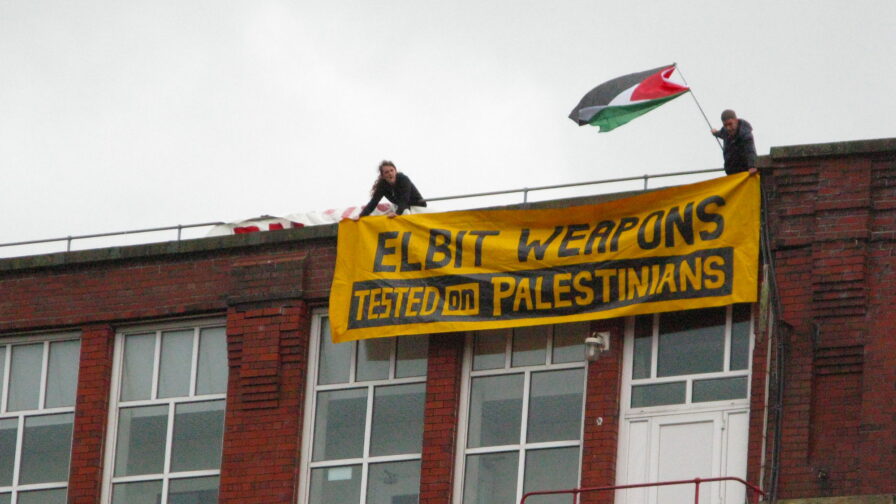 Pro-Palestinian activists have occupied the roof of Israeli-owned Elbit Ferranti arms company in Oldham, vowing to stay up there “as long as it takes” to impose a two-way arms embargo between the UK and Israel so that “no more death can be inflicted on the Palestinian people”.

The activists from Manchester Palestine Action and the International Solidarity Movement, scaled the roof of the four storey building at 5 am this morning, carrying banners with them that they hung from the roof edge of the five storey building. They were joined by placard- and banner-carrying activists at the front gates of the factory who chanted: “brick by brick, wall by wall, Israeli apartheid is going to fall”.

Elbit produces 85% of all drones (Unmanned Aerial Vehicles, UAV) used by the Israeli army, including the Hermes 450 and 900 drones which Israeli forces can equip with two air to ground missiles, or targeting systems to mark a target for other aircraft to attack.

Amnesty International reported in 2009 that Israeli drones were identified as taking part in attacks that killed Palestinian civilians in Gaza. A confidential Israeli military police report leaked to The Intercept showed how the Israeli operators of a Hermes 450 were responsible for killing four Palestinian children, cousins aged 10-11, playing on a beach during Operation Protective Edge. They killed one child with the first missile fired, and then fired a second missile to kill the remaining three.

“I was a teacher in Gaza for two years and I saw many children die in the hospitals from the kinds of weapons produced here during the ‘Pillar of Cloud’ attacks in 2012. One of my students was killed with her two young children in 2014 so I know a small part of the loss the Palestinians must be feeling.

“We’re trying to keep this factory shut so they can’t make things which kill innocent civilians. We demand a two-way arms embargo between the UK and Israel so that no more death can be inflicted on the Palestinian people.”

Another accusation lodged against Elbit by the protestors is that they are testing and developing the use of their weapons systems through their use on the Palestinian population. Comments made by members of the Israeli military industrial complex lend weight to this claim. A brigadier general in the Israeli Army said at a convention on border control technology in Texas, “We have learned lots from Gaza,” he said. “It’s a great laboratory.”

Avner Benzaken, head of the Israeli army’s technology and logistics division, explaining the benefits of the occupation of Palestinian land, was reported as saying in Der Spiegel:

“If I develop a product and want to test it in the field, I only have to go five or 10 kilometres from my base and I can look and see what is happening with the equipment… I get feedback, so it makes the development process faster and much more efficient.”

After the 2014 OPE assault on Gaza, the term “combat-proven” was reported as being added to a military vehicle jointly manufactured by Elbit. During the first month of OPE in Gaza, Elbit’s shares increased by 6.1%.

Elbit Systems bought Israeli Military Industries (IMI) in 2018 for $495 million, which makes them the owner of the sole supplier of small-calibre ammunition to the Israeli army. Over the past year and a half, Israeli snipers have killed over 180 Palestinian protesters in the Great Return March in Gaza, including press, medics, disabled people and 57 children.

Data published by the Campaign Against Arms Trade reveal that in 2017 the UK issued £221m worth of arms licences to defence companies exporting to Israel. This made Israel the UK’s eighth largest market for UK arms companies, a huge increase on the previous year’s figure of £86m, itself a substantial rise on the £20m worth of arms licensed in 2015. In total, over the past five years, Israel has bought more than £350m worth of UK military hardware.

Janet, an activist on the factory roof from the International Solidarity Movement, spoke to The Meteor by phone:

“Today we want to highlight Elbit’s crimes against the Palestinian people, especially in Gaza where protesters are being shot with live ammunition every week. We insist that the UK government, which is supposed to comply with human rights laws and international humanitarian law, should urge Israel to stop killing people in Gaza and stop the occupation of all Palestinian land. I spent time in the West Bank last year and saw the violence that people have to live with every day.

“Elbit is Israel’s biggest arms company, and it profits directly from the continual surveillance, control and violent repression of the Palestinian people. We demand that it stops operating and that the UK cut ties with Elbit Ferranti. We don’t want this company on our doorstop.”

When asked about how long they were prepared to stay up there Janet said, “as long as it takes… to get our message out”.

Elbit Systems has four subsidiaries in the UK; UAV Engines, Instro Precision, Ferranti Technologies and Elite KL. All have faced protests and in recent years. The UAV Engines Factory in Shenstone was closed for nearly three days when it was similarly occupied in 2014.

Ferranti Technologies were contacted by The Meteor for comment, but had not replied by the time of publication.