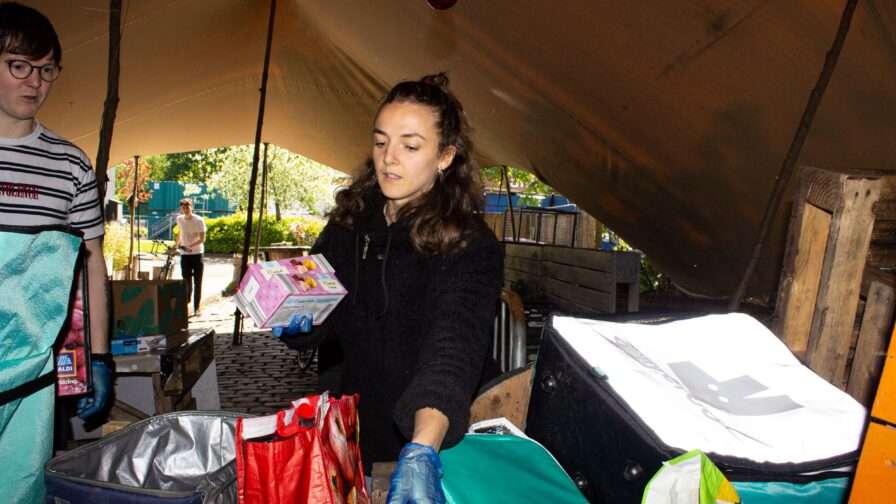 It is a dark time for the hospitality industry but The Old Abbey Taphouse community pub is not letting lockdown get in the way of them serving their locals, by partnering with a number of community organisations to provide Hulme residents with ‘pay-as-you-feel’ meal deliveries.

Hulme’s residents are receiving pay-as-you-feel meals and support from their local pub, The Old Abbey Taphouse. After being forced to close because of Coronavirus, The Old Abbey Taphouse teamed up with ACORN Community Union, Gaskell Garden Project and Geeks for Social Change to enable them to provide their local residents with this vital service called Taphouse TV Dinners.

Gaskell Garden Project harvest unpicked food from farmer’s fields and deliver it to the pub where it is then cooked by a team of volunteers. ACORN then arranges volunteers to collect and deliver the food to residents who have signed up for the service using a database developed by research and development organisation Geeks for Social Change. It is a system built on volunteers and collaboration to benefit the community.

As one of the last pubs in Hulme, The Old Abbey Taphouse is in a particularly strong position to reach local people in a way that other institutions can’t, because many residents have a relationship with the building.

Rachele Evaora, one of the co-directors, explained: ‘Pubs are traditionally a space where communities go to meet each other so it’s not an intimidating space… other public buildings have an invisible boundary there of who is allowed in and who is not’.

The pub has a strong history of actively engaging with local people, including a history project which invited elderly locals to share their memories of the area.

As well as connecting with people who have been to the venue previously, people who have received Taphouse TV Dinners are now passing on the information to their neighbours, which means those who need support but haven’t been identified by the council are getting the help that they need.

As their regular user Kelly Ennis says, “I got right on to proud, but what you might call ‘vulnerable’, neighbours. I said, look, this isn’t charity as such – it is old-school HULME help your neighbours and kin! When I hear of a person who hasn’t signed up, I order one extra and leave outside their front door with a leaflet!”

Pubs are under threat in this country, with Campaign for Real Ale reporting that before lockdown approximately 14 pubs were closing per week. The Old Abbey Taphouse has faced threats of closure and is determined to survive with a key part of its strategy being to actively demonstrate the best of what a pub can be, a vital lifeline to socially isolated people and a community hub. They also serve food and have an array of non-alcoholic options. Rachele told The Meteor, “we have a lot of people who come in and don’t drink at all.”

As well as providing a hot meal they make an effort to have the same volunteers dropping off at the same places so there is the opportunity to build a relationship, and they also have started including art packs for locals who have told them they are bored and their mental health is suffering.

One woman told a volunteer that she missed having green space around her so they dropped in some plants courtesy of Gaskell Garden Project with her last delivery. Instead of telling local people what they think is best for them they are actively engaging with them and taking on board feedback which means that the hot food isn’t just a meal – it’s the start of a relationship.

Hulme councillor Annette Wright praised the service. “I’m concerned about the people who haven’t got the internet at home, a lot of people have got email addresses and are online but they go to places that are now closed to use the internet like the library or McDonald’s. They may not be getting all the information… Here people are able to get in really locally and say ‘do you need some help?’. The council has a helpline for Mancunians in need, there have been over 6000 calls in the past few weeks with 90% of them relating to food.

The Old Abbey Taphouse is currently doing this without any funding from the council, relying on the kindness of businesses, volunteers and community groups to keep the service running. Taphouse TV Dinners are asking members of the public to donate to the cause if they can and to encourage anyone they know in need to sign up.

Further information about Taphouse TV Dinners can be found here