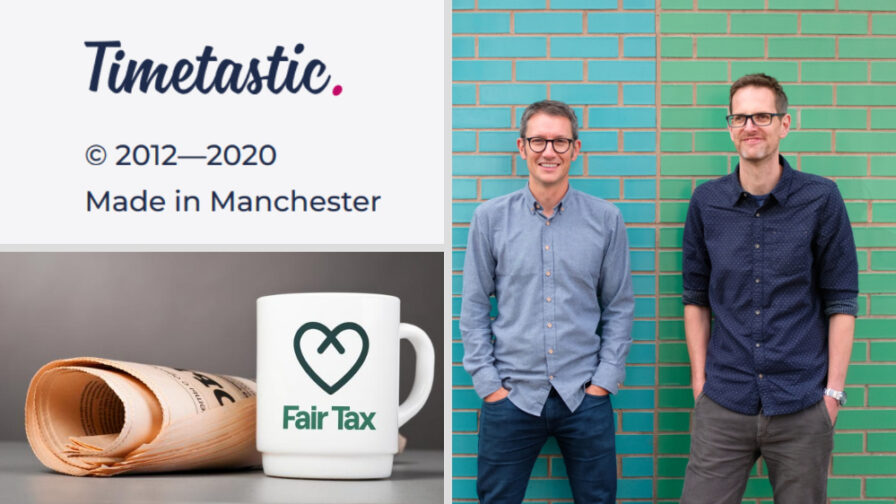 Timetastic become the latest in a cluster of companies based in Manchester to achieve the Fair Tax Mark. Awarded to companies who are open and honest about the tax they pay.

Timetastic a firm proud to declare that they are “made in Manchester”, secured Fair Tax Mark certification today. Joining the growing number of businesses taking an ethical and open stance on their tax affairs, in contrast to the many tax dodging multinationals corporations such as Google, Facebook and Starbucks.

Providing online holiday and leave tracking for more than 8,500 businesses, Timetastic are a rapidly growing digital business that were founded in Manchester in 2014. Their products help free up managers’ time spent on keeping track of holidays and assist staff in taking their full holiday entitlement.

Gary Bury and Matt Roberts are the founders of Timetastic and believe that businesses should support the local and global communities that they are part of by paying their fair share of tax. Bury, said:

“Tax pays for the roads we drive on, the schools that educate our children, the NHS that cares for us, the police and fire services that keep us safe. We’re proud of the tax we pay. Securing Fair Tax Mark certification is the best way for us to demonstrate that to our clients. Since our launch in 2014, we’ve seen fantastic growth, and it’s only right that we contribute fairly towards the vital public services that our clients and people rely on to stay safe, happy and healthy.”

The Fair Tax Mark, which is also based in Manchester, is an independent certification scheme which recognises organisations that demonstrate they are paying the right amount of corporation tax in the right place, at the right time. Since its launch in 2014, more than fifty businesses, that between them have over 7,000 offices and outlets, have achieved Fair Tax Mark certification. Including Manchester head-quartered businesses such as Timpson and the Co-op, as well as The Eighth Day Cafe, Unicorn Grocery and the Ethical Consumer.

Timetastic have supplemented their current financial reporting procedure with a Fair Tax Mark Statement, as part of the accreditation process. The statement includes a tax reconciliation and accompanying narrative, which clearly explains how much tax they pay and why.

“We are delighted to announce that Timetastic has joined the Fair Tax movement, and are proudly saying what they pay. Their certification means that customers, suppliers and staff can clearly see they have a transparent and responsible approach to tax. It is refreshing to see a digital enterprise fully embracing responsible tax conduct.”

“The public rightly expects responsible behaviour, but far too often they’re reading headlines that describe the tactics businesses employ to avoid contributing the tax they should to the public purse.

“It is estimated that annually, due to corporate profits being shifted to tax havens, corporate tax revenue losses in the UK amount to at least £7bn. Just think of the nurses, doctors and teachers we could employ, or the renewable energy infrastructure we could build if that tax was paid as it should be?”

There are record levels of public concern about the use of tax avoidance practices by businesses in the UK, According to polling data from ICM. Over three-quarters of people responded that they would rather shop with (77%) or work for (78%) a business that can prove it is paying its fair share of tax. Three quarters (75%) also said that it was important to celebrate businesses who can demonstrate good tax conduct and shun the artificial use of tax havens and contrived tax avoidance practices.

With the addition of Timeshift to the list of companies flying the Fair Tax Mark, it appears Manchester may well be leading the way in building the pressure for a fairer tax system that better serves societies on a local, national and international scale.