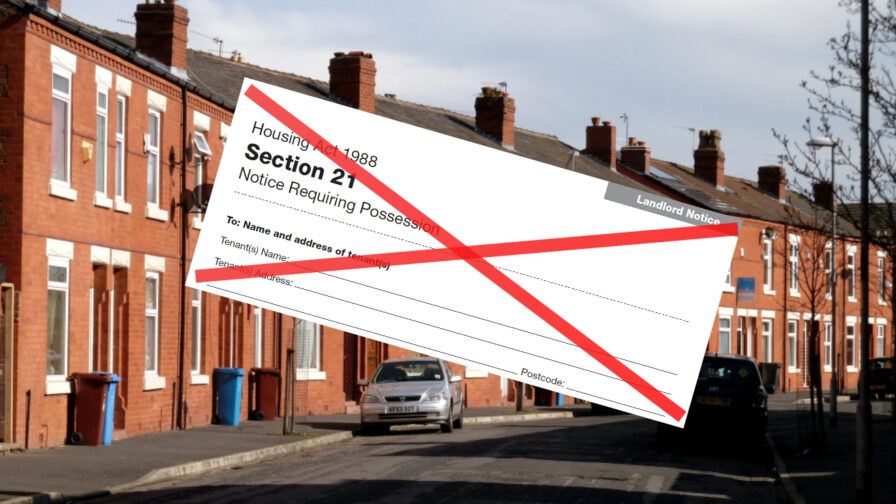 A coalition of housing activists are celebrating a campaign victory as the government announced its plans yesterday to abolish “no-fault evictions” under Section 21 of the 1988 Housing Act and introduce open-ended tenancies for private renters in England.

Currently, Section 21 allows landlords to evict tenants without giving a reason, after a fixed term tenancy agreement has ended. They are often used to carry out revenge evictions, where tenants lose their homes after asking for repairs or making complaints.

A Citizens Advice study showed 3 in every 4 council Environmental Health Officers saw tenants receive no-fault evictions after complaining. Private tenants raising a formal complaint about their housing had a 46% chance of being issued with a Section 21 eviction notice within six months of submitting it.

Since 2015, some 140,000 tenants have been victims of Section 21 revenge evictions, which are one of the leading causes of homelessness in England.

“Tenants Union UK and the End Unfair Evictions coalition have won a great victory for tenants today, but without proper resourcing for local government enforcement against bad landlords, councils will struggle to make use of new legislation, and there will be no easy fixes for tenants.”

The campaign gained 50,000 signatures on a petition in just 10 weeks and secured the support of the Labour party, the Green Party, 13 local authorities and was widely covered in the mainstream media.

A statement by ACORN tenants union emphasised the importance of members engaging in direct action, in the victory achieved:

“We’ve taken the fight directly to the doorsteps of violent and bullying landlords, chiselling letting agents, wealthy property developers and uncaring politicians. We’ve fought the effects of Section 21 communities across the country. Our members deliberately put their bodies in the way of landlords and bailiffs, using direct action to prevent them from kicking people out on the streets.”

The government plans to abolish Section 21 and amend the Section 8 eviction process, to allow landlords to regain their property should they wish to sell it or move into it. Crucially the Section 8 process allows the tenant to challenge the eviction in court.

“By abolishing these kinds of evictions, every single person living in the private rented sector will be empowered to make the right housing choice for themselves – not have it made for them. And this will be balanced by ensuring responsible landlords can get their property back where they have proper reason to do so.

“We are making the biggest change to the private rental sector in a generation. We are creating homes, opportunities and thriving communities, where people can come together and put down roots, bound by a strong sense of belonging.”

The government press release explained steps will be taken to help landlords:

“Court processes will also be expedited so landlords are able to swiftly and smoothly regain their property.”

No mention of increased support for the tenant during court proceedings was made by the government in the press release. Massive austerity driven cuts to the legal aid system are already hindering tenants’ access to justice. A Freedom of Information request by The Meteor revealed a 62% drop in the number of housing cases receiving legal aid support in Manchester, between 2012-13 and 2017-18.

“Section 21 has no place in a civil society. It has caused immeasurable distress to our members, in the very worst cases forcing them on to the streets for no fault of their own. The government has taken the right step and we are eager to see what answers they have to tackle the chronic undersupply of truly affordable housing.

Clay, who is also an active campaigner against poverty and austerity with Unite Community, raised concerns over austerity driven changes to social security:

“Low income tenants claiming Universal Credit will still be vulnerable to evictions, due to delays and missing weeks of housing payments, caused by the unjust and illogical rules put in place by the government. Landlords are sometimes opting to evict tenants who are moved onto universal credit as they cannot afford or will not wait for the payments to come through, and unless this is changed we will continue to see many private tenants claiming benefits being evicted.”

The government previously promised to end revenge evictions in 2015 with the Deregulation Act, which was meant to prevent landlords from Serving a section 21 notice within 6 months of an improvement notice for repairs from the local authority. But with local authority housing services slashed to the bone the Act was ineffective, with only 5% of revenge evictions prevented, and data gathered by Generation Rent shows a major reason why.

Information was gathered from 99 councils covering more than two-thirds of England’s private renter population. These local authorities had received 67,026 complaints about housing in a year, 2017-18, but just 3043 (or 4.5%) improvement notices were served on landlords.

The effect on tenants of the scrapping of Section 21 and amendments to Section 8 eviction notices remains to be seen. Tenants rights activists still have many battles to fight to ensure fair treatment of tenants in Manchester and across the UK. The Manchester branch of ACORN are carrying on that fight today in Bolton, where they are resisting the Section 21 eviction of a woman and her young child.