Learning from housing histories: why we need to requisition property to address the pandemic 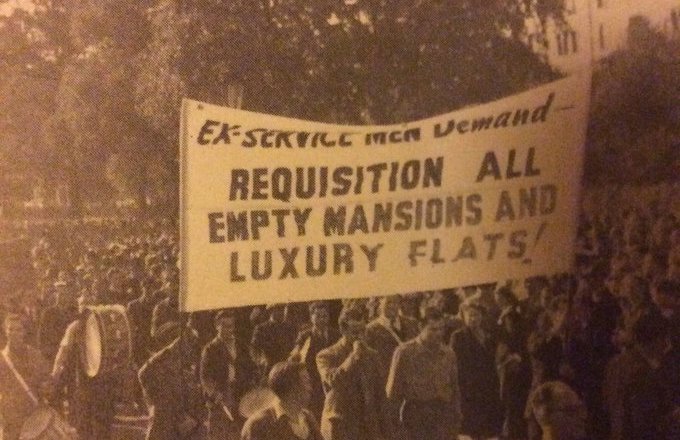 The UK Government’s commitment to upholding individualised private property during the global Coronavirus pandemic is matched only by their wilful ignorance of historical responses to crises.

At the time of writing, they are ignoring modest calls by organisations such as Streets Kitchen to buy up hotel rooms so the homeless can self-isolate and from Greater Manchester Housing Action to instigate Severe Weather Emergency Protocols (SWEP) to help shelter rough sleepers, instead opting to simply throw money at the problem. Yet these measures are only the most obvious actions the government could take. With 20,000+ empty homes in Greater Manchester, 22,000+ across London, and 226,000+ across England which have been vacant for more than 6 months, we need to expand our notion of what’s possible and make the best use of resources at hand. One way we can do this is through requisitioning empty and under-utilised property, and there is a historical precedent for this in the UK.

Property hasn’t always been seen as something untouchable. In times of crisis, such as the first and second world wars, the government requisitioned vast swathes of land and property, occasionally displacing entire villages (some of which never returned, despite promises from the Ministry of Defence). They also took hotels and apartments for hosting war offices, refugees, and personnel, and large rural estates for sourcing timber and securing agriculture.

The automatic protection usually afforded property owners, especially of large or under-utilised resources, was temporarily overlooked in the name of a greater good. Once the blitz began displacing ordinary people, the wartime coalition even extended requisitioning powers to shelter those who were ‘inadequately housed’, whilst many communities (much like the mutual aid groups spontaneously emerging from the Coronavirus outbreak), also took matters into their own hands and began requisitioning ‘from below’.

As war came to an end, the question was raised whether requisitioning powers should be extended into peacetime. A lack of housebuilding, the return of 3.5 million servicemen, a baby boom, and lasting bomb damage, had exacerbated an urban housing crisis which predated the conflict. Yet there was continued hesitation to further extend requisitioning powers which were only considered ‘justified’ by the exceptional circumstances.

In June 1945, a group of ex-servicemen in Brighton (known as the Vigilantes) decided to take action, moving families into empty hotels and putting pressure on the government to act. Despite Churchill complaining bitterly about the squatters in a secret memo, the government did respond by extending requisitioning powers to alleviate the post-war housing crisis. Whilst property rights are, of course, important to protect against undue intrusion from the state and ensure security within the home, it was recognised that these rights should not trump common needs when it comes to housing provision.

By the summer of 1946, however, little had changed. A shortage of manpower and resources had greatly delayed Labour’s house-building programme, and many local authorities remained reluctant to use requisitioning powers, or even redeploy requisitioned apartments which had remained empty since the war.

In May, cinemas reported on James Fielding from Scunthorpe who had moved his family into a local radar base, inspiring communities to once again take matters into their own hands. By August, the government was discussing 40,000+ families across the country who had squatted empty military bases, setting up postal services, milk rounds, and social centres. Many bases were later subsumed into the council housing system, and some families remained in the bases – often in dire conditions – until the mid-1950s, whilst the house building programme caught up. Yet, once again, what this demonstrated is that property ownership (this time, owned by the military) should prioritise common needs.

In recent times, before the pandemic, there have been other calls for requisitioning empty buildings as part of crisis response. In 2017, leader of the opposition Jeremy Corbyn called for empty apartments in Kensington and Chelsea to be requisitioned in order to temporarily house the survivors of the Grenfell Tower fire which killed at least 72 people. His proposal was, predictably, met with derision and dismissed as impossible. Yet luxury flats had been requisitioned in this very borough in order to house Gibraltarian refugees during the war. By 1946, some were still empty, yet the borough were seeking to hand them back to previous owners (despite being given explicit permission to use these flats to alleviate the post-war housing crisis).

The Communist Party once again mobilised, leading 2000 people from poorer streets to squat the flats in September 1946. In comparison to the military bases, however, this action was immediately met with condemnation. Whilst publications such as the Daily Mail had celebrated taking over empty, rusty, and cold huts as a continuation of the ‘blitz spirit’ in the face of a socialist Labour government; the taking over of empty requisitioned luxury flats was seen as crossing a line (one which was redrawn after the Grenfell fire 70 years later). The families were swiftly evicted, although there were reports of a marching band playing them out, and many were temporarily rehoused in empty nursing homes.

Much can be learnt from these histories. The Coronavirus requires a mobilisation on a wartime scale, from above and below, as well as a transformation of what we consider to be possible with regards to property. We know that the virus will not affect everyone equally and will run along existing fault lines in our society, falling hardest on those who have long been treated with ‘social distance’. Requisitioning, whether by the state and communities, isn’t an unproblematic solution and comes with its own problems of accountability. But it does push us to take direct action, deprioritizing individualised property rights which protect selfish ownership of empty or under-used property, towards a more responsible and equitable distribution of resources.

Local authorities still have some powers which allow them to requisition empty properties, and they should do this in collaboration with organisations and community groups (such as Streets Kitchen or Outside Project) who now have years of experience and expertise mobilising people to turn abandoned urban spaces into shelters. Some forward-thinking local authorities, such as Glasgow City Council in collaboration with Simon Community, are already identifying empty furnished flats which could be used as temporary accommodation.

Most importantly, we need to recognise that our collective response to the Coronavirus will define our capacity to cope with the next crisis. So we need to think how ‘temporary’ steps towards a more equitable distribution of resources, which are currently justified by crisis, can be made to last beyond the next pandemic, the next bout of severe weather, or the next economic crash.

At base, this requires us to approach property differently, and ensure a more equal and just long-term access to shelter, safety, and comfort which goes beyond the profit-motive. As history attests, we’ve overlooked individualised property norms in favour of collective ends before, and it’s certainly possible for us to do it again.

Sam Burgum is a researcher for the Urban Institute at the University of Sheffield. You can find him on Twitter at @SJBurgum